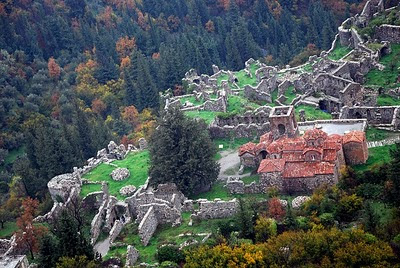 
When the appointed day came, the day on which our Saviour consented for our sake to be nailed to the cross, on that same day and at that same hour of His sufferings and burial, she died and was entombed together with Christ.

Cleofe Palaiologina Malatesta died on Megali Pareskevi, April 10, 1433, about noon, in childbirth.  Her husband was beside her bed, mixing some medicine. There was a sudden hemorrhage, a great deal of blood, a dead baby.  Bessarion said she flew out of his hands.

No one expected death, though she had spoken seriously to friends about her thought that she might not survive. She had given birth successfully before, though she had been afraid, then, too.  Doctor Pepagomenos said her body was built for childbearing.  But she had been keeping an exceptionally austere fast, standing much of each night in prayer, and she  had become extremely anemic.  You could expect a hemorrhage with anemia.

Cleofe's body was carried on a bier up the hill to the palace chapel of Agia Sophia and interred that afternoon -- some people in the city only learned about it when they saw the procession, Theodoros following the bier, beating his head with his fists, howling (ὀλολύζοντος). The bier was mobbed, everyone trying to put a hand to support her.  Mistra was struck as if by a collective wound, Pepagomenos said: it was if everyone had a sudden fever in the bones.

Like a crystal shattering, Cheilas said. He had come up to Mistra, expecting celebration, as they had celebrated before when this woman first came from Italy -- a light from Hesperia, he said.


You gave us then a celebration, showing us all something new, a reason to sing sweetly, songs worthy of your goodness and of the good fortune that came to us from you . . .  But now you set us to deep grieving, to uttering long cries of pain,
to weaving a tragic song, antiphonal to our former hymns,

Pepagomenos implied that the baby was a boy:

But we were hoping that a successor for the race and a continuation of the monarchy . . . that there might be skipping and dancing in your realm, . . .that we might sing rightly about this and hymn it to the limit of our abilities.

When they spoke of her later, it was in terms of light, and music.  The Epitaphios service that evening must have been unbearable.

Translations: Pierre A. MacKay. For his translation of Cheilas' monody for Cleofe, go here.  For the sources for Cleofe's death, here.