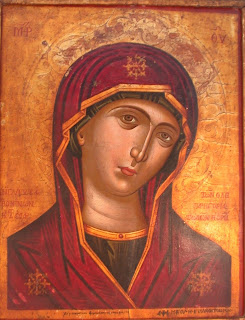 At the forty-day μνημόσυνον after Cleofe's death on 18 April 1433, the intellectuals of Mistra came together to give their monodies. The four monodies that we have (there is a fifth, one page and negligible) are long, often moving, and indirectly full of information. I have been interested lately in their view of Cleofe as a political figure.

She was obviously a great help to Theodoros, and apparently participated in discussions with his advisors. Her doctor, Pepagomenos, spoke as if she were still present among them:
For there was nothing that was not communicated to your judgment and thus some difficult problems were solved, while matters of greater moment, of holy governance and of the (soul’s) ascent were determined by the superiority of your virtue.

Nikeforas Cheilas, about whom we know nothing, provides a little more information, though not enough:
She was not, in her mind, in competition with women, even as she worked to surpass the best of them, both ancient and modern, but although she was counted among women, she possessed a truly masculine intelligence, adorning her spirit with gentleness, adorning the constitution of her character with the guidance of philosophy and the practice of all the virtues and graces, and presenting herself as one belonging to a royal race . . . In the midst of turmoil, when present among the imperial councilors she gave virtuous advice of every sort and made herself available to help everyone . . .

This was not in itself exceptional: political participation was a normal activity of Palaiologan and Malatesta women. Much more striking is the fact that -- allowing for exaggerations implicit in imperial eulogy -- she was regarded as so valuable that George Gemistos used the word "salvation" (τήν τῆς ἀρετῆς ἄχρι τελευτῆς σωτηρίαν) in speaking of what her virtue had done for them.

The men don't tell us much. Apart from that brief mention of her political skills, Cheilas spoke of her great generosity, Bessarion referred to her philanthropy and patronage -- but of what he fails to tell us. Pepagomenos was a little more specific, speaking of her great concern for the poor, visiting them in their hovels, bringing them firewood and cooking for the sick. (One wonders how a Malatesta-Palaiologina learned anything about cooking.) He also suggests that her arrival -- after twenty-five years of no imperial woman in the palace -- much improved the lives of women there and made it possible for a number to be married.

This, though is the kind of behavior to be expected of the women of her family, all of them tremendously educated and given extensive political authority -- her sister Paola Gonzaga of Mantua, her sister-in-law Battista Montefeltro Malatesta of Pesaro, their cousin Elizabeth Malatesta of Rimini. In the well-ordered court of the early Renaissance, the ruler's wife was the social security and public assistance administrations.

This, though, is not what Pepagomenos was talking about when he said:
The queen of the Romans is dead, the very eye of the people, the shared ornament of the inhabited world, the steadfast pillar, while all our present fortune totters. How the death of our queen has turned the expectations of the Romans upside down and has left none of the hopes of our race intact. The bond of union of the monarchy is gone, all is dead and nothing remains, not just of the present for the Romans but of what is to come as well, and it persuades us to prophesy the worst and to expect no end of distress. This horror has run through us like a thunderbolt, burning everything out and turning it to ash, threatening never to give up possession until it consumes all of what is left of the Romans. All the best for us came with your settling among us, and our congenital misfortune has taken away all this, and more besides, in your being gone from us in such an unnatural way.

This conveys -- again allowing for rhetoric -- an extraordinary sense of the doom that must have saturated the educated of that culture, if not the general population. Theodoros had, ten years earlier, unsuccessfully tried to give away to Venice the Morea that he could not defend, and his brother had given the Venetians Thessalonike which they could not defend either. A generation earlier, Adam of Usk reported that Greeks whom he had met in Rome told him that "their empire is almost worn out by the attacks of Turks and Tartars," and Kydones had written Manuel Kantakuzenos as early as 1353 that the Byzantines could not ultimately withstand the Turks.

Pepagomenos kept returning to the idea of doom:
What greater disaster might come than what has destroyed the whole world of the Romans . . . leaving behind sorrow not only to us, her subjects, but to all who are accounted as Roman.

How was it that Cleofe was seen, even rhetorically, as the Byzantine’s sole bulwark against the Turks? The sources give us no way to answer this question. How was it that Pepagomenos could conclude his monody with this statement?

It would be in your power, either with your prayers to the divine, as you stand immediately beside God, to alleviate the distress of our ruler, and through this the misfortune of the entire Roman people---you can do this, I know, with a mere nod of assent---or to leave us to mourn and lament throughout life, as long as the sun sends its rays over the earth.


Cleofe in the position of both Zeus and the Virgin is a stunning image! 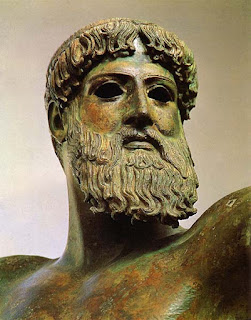 
My great appreciation to Pierre A. MacKay for the translations of the monodies. The monodies can be found here.