The Tenant from Naples 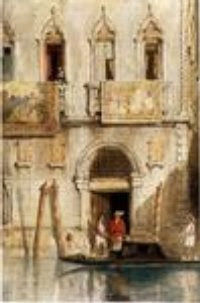 In 1540, the Minio brothers--Alvise, Almoro, and Francesco-found themselves in severe financial trouble. After several years during which they were not paying their sister Lucrezia's dowry, an amount they had offered, plus not handing over the gold ducats left her in her mother's will, Lucrezia's husband, Leonardo Malipiero, brought suit on her behalf. He obtained a judgment against the brothers for more than 8,000 gold ducats. A considerable amount of Minio real estate was assessed and put up for sale at auction, including:
The auctions did not go well, and Leonardo was given the rents for the interim. The brothers rented a floor in the S. Moritzio palazzo for themselves. S. Zulian was rented to a Misser Zuam Thomaso from Naples for two years for 55 ducats a year. Zuam Thomaso got a very good deal as this was 25 ducats less than the 80-ducat rent of 3 years earlier. The lease specified--this is important--that the owners would supply beds, ironmongery, keys, and window glass. Zuam Thomaso left at the end of his lease in 1540, and the S. Zulian house was then rented to Ser Antonio Stampa, also from Naples. The rent was due every four months.

For that reason, it was four months before Leonardo noticed that there was no rent from S. Zulian . He sent his agent, Ser Baptista di Antonio, to inquire. Ser Baptista reported back on 8 July 1540 that Ser Antonio Stampa from Naples was missing. This is what was missing with him:
Those of us who have had tenants will know how he felt.

Over the next few years, Almoro left Venice, Leonardo died, Lucrezia remarried, Francesco and Alvise died, Lucrezia died. In 1561, 31 years after the original judgment in the case, Alvise's son Oratio was still paying Lucrezia's second husband, Agustin Ferro, interest on the dowry.
Posted by Nauplion at 5:00 PM No comments:

A Most Beautiful Red Parrot 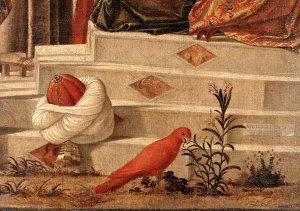