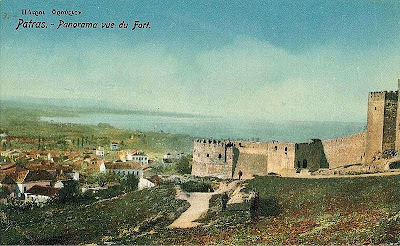 Antelm the Nasty was very nearly the worst person in the whole world. He comes to attention as the first Frankish archbishop of Patras. "Nasty" is the name Chris Schabel gave him in an outstanding paper (see below), and there is no reason to disagree with that assessment. When William of Chaplitte took the surrender of Patras in 1205, he appointed canons for Patras, and the canons elected Antelm Archbishop. He had to be ordained a priest first.

He spent his time in extraordinary legal and political entanglements, with two popes, and two Villehardouins, and just about everyone else, traveling back and forth to Rome a number of times. The man's persistence in arguing was amazing.

Now, the Pope has just suspended a German bishop for spending too much money on personal luxuries, a lot of money. After complaints from the Bishop of Coron, the Archbishop of Corinth, the Archbishop of Larissa, a cardinal, and a great many others -- "battered our ears," here are the 30 reasons why Pope Honorius suspended Antelm:
"Therefore, although the archbishop, even if not of all the aforesaid, was found guilty of enough of them that one could have prodeeded against him very severely, we however, the rigor of severity being tempered by the mildness of mercy, have decided to provide thus in this case: Indeed, we have suspended that archbishop from his pontifical duties for a year, ordering that for that year he shall live according to a rule in some monastery . . . the same archbishop shall behave such that we are not compelled to change mercy into judgment."

This material is taken from Chris Schabel's "Antelm the Nasty," Diplomatics in the Eastern Mediterranean, 1000-1500: Aspects of Cross-Cultural Communication. Eds, A. Beihammer, M. Parani, & C. Schabel (2008).

Posted by Nauplion at 4:03 AM No comments: 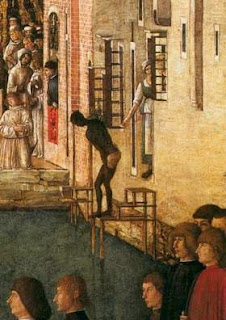 It is difficult to find pictures of slaves who are not black.  A hundred years after the documents in this blog, the European image of slaves was of a black African, but in the 14th and early 15th centuries, slaves were more likely to have been white -- Slavs, Greeks, Circassians, Tatars.  It is disconcerting to discover in Sally McKee's *** collection of Cretan wills that Greeks, and Greek priests, owned Greek slaves.

Almost nothing has survived from the Morea about slaves in the Byzantine-Franish-Venetian period, and what has survived has come from Methoni and Koroni.  Slaves were probably statistically insignificant in the Morea, but it is disturbing to see what a matter-of-fact process was the sale and purchase of a slave.  Most of them had been stripped of their identity by being baptizes and given a new, "Christian," name, yet in some cases someone was careful to make a record of the former name.A few names appear several times, both purchasers and slaves.  Some of the slaves here would end up in Venice.

There is not enough information to understand the prices, though  Greeks were usually the least expensive slaves. Only one of the then slaves here is a male.  The females were all wanted as "house" slaves, and whatever their other duties, would have been cooking and scrubbing and hauling water.  Studies of Mediterranean slavery have shown that buyers rarely wanted to introduce a male into the intimacy of a household.


I don't find a document that tells me how Bon got Dieromuo back, but:
The next pair of documents give a warm feeling, until you read a further document and discover that Enrico bought a new, younger, slave girl.

Vade, Sta, Ambulent: my article on freeing slaves in Crete.

*** Sally McKee has a number of articles on Cretan and Mediterranean slavery.

Posted by Nauplion at 7:54 AM No comments: 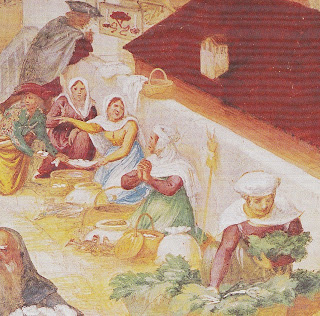 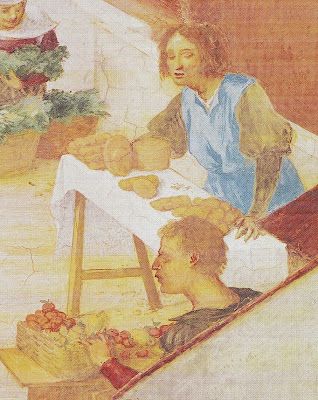 Pictures from the fresco by Lorenzo Lotto, The Legend of St. Barbara, 1523-24, in the Oratorio Suardi, Trescore. 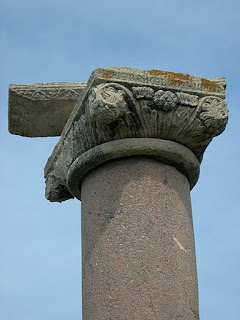 Column in the central plateia of Methoni wher
all  announcements were made, public
justice enacted, and the main market held.

Volume 4  of Sathas has a wonderful collection of laws and market regulations for Venetian Methoni. Laws were produced when there were problems to be solved. Some were produced locally, by the governor and his advisors, some were produced in Venice. New laws were announced by the gastaldo (and a trumpet) in Venetian-Italian and Greek at the column in the central plateia -- which still stands, as well as at the land and sea gates, and at other relevant locations.  Very similar laws were in effect at Koroni, though not always the same, and at Nauplion. Some monetary equivalents:
1 ducat          = 130 (1424) - 175 (1457) soldi

1 soldo           = 4 tornesi/torneselli
1 hyperperon = 20 soldi/80 tornesi
300 soldi       = month's wages for a soldier or sailor
With Methoni as the primary port for disembarking troops for the Peloponnesian war in the 1460s and 70s, there is a sequence of laws concerned with weapons, noise, and the inevitable violence. The last of the three included here reflects despair over the harshness of Venetian taxes, & the continual raids on farms by continually unpaid soldiers.2
This last law was an attempt to stabilize the Methoni food supply. Taxes on produce and sales were important, but the real issue was food. Because of the war, the soldiers who needed to be fed and who looted, and the recent two years of plague with the loss of so many farm hands, Methoni was constantly on the brink of starvation.

Next week, Surprised by Time will look at some of the laws of the Methoni marketplace.

1  Casali: villages on landholdings.
2  In 1465, provveditor Jacopo Barbarigo had written of his embarrassment at not being able to control his         soldiers looting, because they weren’t being paid.
3  I have no idea who Ser Nicolò Tinto was, but apparently his house was quite prominent.
4  The mole led from the harbour gate to the little island tower
5  Borgo: the city outside the fortifications.

Primary feathers from left and right wings, thinner on the fore-edge.
Erosion is evident on both edges.

From July on, the crows are in moult, even the ones that hatched out in the summer. The feathers that grew in beginning last July work their way out, and new feathers grow. There is a period of more than two months when crows lose their glossy black and become not just a drab brown, but because of the feathers coming out and the feathers coming in, they look like a medieval band of lepers. This is when you see bits of their insulating undercoat made up of little fluffy grey feathers. 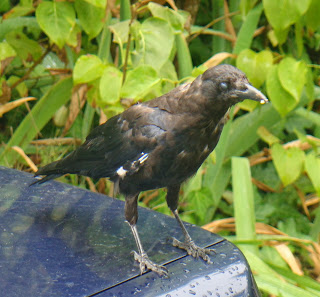 Crow at the worst stage of moult.

Air -- and sunlight -- erodes feathers. The brilliant black that sometimes flashes blue and purple in the right angle of light is a matter of refraction, not only of melanins. During the year the structure of the feathers that refracts the gloss wears down, and at the end of summer crows show the underlying pigments. 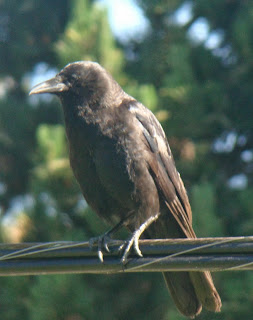 Not all of our crows are evenly-pigmented.  The Korax family has patches of lighter-colored feathers all year around, some of them with a light ring around the neck. They are not discriminated against by the black crows. 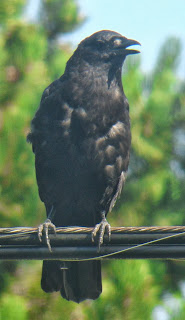 The fore-edges of the wings gradually deteriorate.  Brushing against the nest, or tree branches and telephone poles, or other crows, wears down feathers. If you want to see nearly perfect feathers, go to this site created by the US Fish and Wildlife Service where you can identify most of the individual feathers from 100+ species of birds. 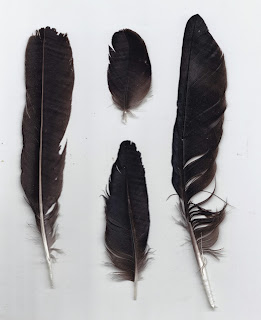 It is illegal to possess these feathers.  I brought them inside to scan, and then returned them to the outdoors, to the crow shrine.  We have a place on the edge of the yard where we put odd things dug up in the course of gardening -- strange-shaped rocks, enormous nails used for railroad ties, crow feathers. Passers-by sometimes take the stones, never the feathers. As far as I can tell, when the crows eat cracked corn beside the feathers, they never notice them.

I am fascinated by the evidence of the seasons, something I take for granted with the trees, with the plants in the garden. When the chlorophyll in leaves breaks down at the end of summer, we see the underlying carotene and anthocyanin pigments. Until this year, I had never made the connection across the species between the change of leaf color, and the change of crow color, between shedding leaves, and shedding feathers.  But that analogy goes only so far.  One of the Korax family came up to the car when I drove into the driveway this afternoon, and I saw the glossy black of the new feathers, not fully grown out. 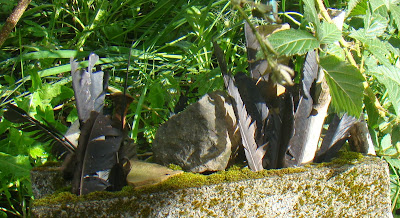 Posted by Nauplion at 8:11 AM No comments: