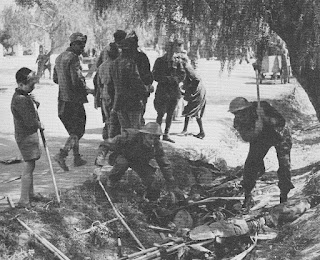 In the summer of 1978, swimming just outside the harbor at Nauplion, I glimpsed on the seafloor what looked like part of the bridge of a ship.  The Blue Guide mentioned the British-Anzac retreat in April 1941 from Greece.  Later, I wrote to leading newspapers in Australia and New Zealand, asking if anyone remembered Nauplion.  This post and the next will consist of excerpts from the dozens of letters I received about those days.  I have not edited the excerpts beyond indicating where I have omitted text.
* * * * * *

I was evacuated from Nauplion . . . on April 25, 1941.  I was just 20 years of age then and a driver with a bomb disposal, salvage-cum-recovery unit.  . . . I did keep a diary . . . unfortunately I was rather busy at Nauplion and scrawled in fewer lines in those couple of days. . . I was given duty of destroying (per tipping over cliff) trucks, cars, bikes, etc. which were arriving hourly bearing personnel of every description and country.  For a depression kid who never owned more than a push bike it broke my heart to see such a waste. This carnage went on all day during which we were bombed pretty consistently although casualties were surprising light.
I just noticed I wrote: "bloody Stukas again!" -- Remember coming back from cliff face and seeing quite a few bodies at road-side.  I clearly remember being assigned to group and under cover of darkness moved northwards to Argos (from Nauplion) . . . We were told our ship was to be the Ulster Prince.  Recall the ship sidling into bay, then to our horror saw it run aground. . . with a short period, over came bombers with grounded ship as target.  Ship caught alight and continued to burn throughout night, lighting up whole area.
In early hours of morning in came the Glenearn and we boarded her "ducks" and ferried out bay to her.  One of "ducks" was hit by a destroyer and sunk with loss of life.  Ours made it to mother ship but boarding was all haywire with many of us taking a ducking in attempts to get aboard.  . . . Might add in passing, with me was my father who had joined AIF with me claiming to be my elder brother!

I was with the 6th Div Signals  . . and we fought the rearguard action during our withdrawal from Greece, on reaching Argos . . . a sad sight met our eyes, the ship on which we were to escape on was in flames, having been hit by the German bombers . . . we traveled to Kalamata and waiting as we had received a radio signal that a ship would pick us up from there.  In the early hours of the morning we saw a light coming in from the sea and it was a destroyer.  My brother and I were two of the last soldiers to board her on her final run to the Dilwara, as we found out after the war that a Sgt friend of our was captured half an hour after we left. 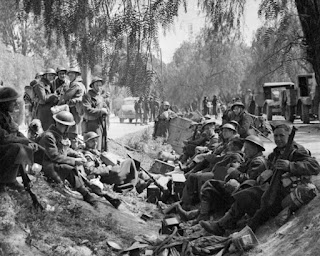 Troops of the 2nd New Zealand Expeditionary Force at Nauplion.

. . .  Our route was south to the town of Trikala, east to Larissa, southeast to Volos, then southwest to Lamia where we dug in.  Our stay was not much more than a week when the Greek army to the west was overrun and we had to pull out again.
This time we uplifted the 25th Maori Battalion and brought them back in one night through Eleusis and Corinth to Nauplion where they marched to Tolo and were taken out that night.  We hid up in a pine forest till dark then went back to Corinth to pick up the rearguard battalion.  Back at Nauplion my most vivid memory was at how quickly the Greek peasants took everything moveable before we destroyed the vehicles.  The heavy vehicles like repair trucks were tipped off a cliff into the sea, the rest the radiators and engine sumps were drained and motors raced at full gun until everything broke, tyres were shot and slashed to bits and all told it was a shambles.  At about 2 am on 25th April we went on board the troop carrier Glengyle and after a fairly hectic sea voyage made it to Suda Bay.
. . .  On food, we fed quite well on the whole during the Greek affair.  During the actual withdrawal we fed like lords.  We had huge food dumps etc. in our area and were told to help ourselves before they were destroyed.  . . . it was rather a gamble as none of the cases was labelled and if you did not know what the numbers meant, anything could happen.  . . . I understood several Greeks were later shot by the Germans for being in possession of foodstuffs they had acquired from the dumps.  On the whole, the people we met were very hungry even before we landed there.  It was not unusual for the females to offer themselves or even their daughters to the troops in return for food.  Tea was the highest price commodity with canned beef running a close second.
. . .   Probably about 80% boredom.  The remainder? 18% a lot of noise and about 2% drama and danger.

I left Athens in a small convoy on 23rd April and after some drama we crossed the Corinth Canal and arrived during bombing and straffing at the small port of Argos.  We were a bit short on sleep -- and rested all day -- the 24th  -- in tense German air activity.
At midnight we were instructed to gather at the loader's edge and were ferried in small boats to the side of the Stirling Castle (I believe that was the name*) and clambered aboard . . . I remember bread & coffee  & a long sleep until dawn. A heavy AA gun mounted on the predeck began firing and scared the daylights out of me.  I jumped up and saw we were part of a convoy preceded by many Royal Navy ships -- 2 of the 3 aircraft were hit and we proceeded to sea.  News was that we were on the way to Egypt.  However -- after passing Crete, I understand the crew volunteered to go back to Greece to pick up further troops.  It was 25 April. . . . The ship turned round and we were off-loaded on Crete at Suda Bay. 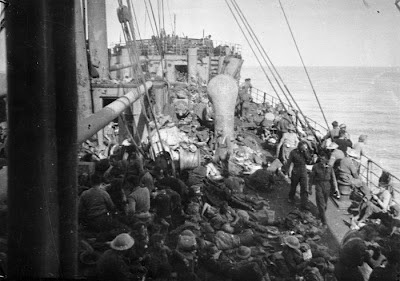 Soldiers being evacuated on the Thurland Castle.

* Not Stirling, but Thurland Castle.