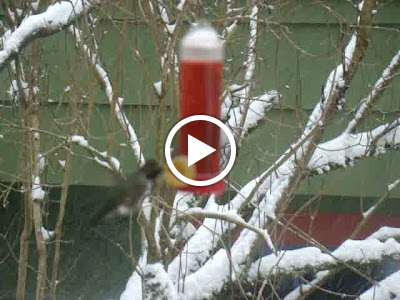 Our female Anna's hummingbird in the snow last winter.

She lives in the shrubbery next door and we have never been able to find her nest. We call her "Anna" and in the past two summers we have created a whole garden for her, under the kitchen windows where she spends much of her day in the HotLips salvia.  She has to, as she is currently preparing her third brood of the summer to fledge. [Hummingbirds work efficiently -- it takes 6 weeks from egg-laying to fledging, and within three days of fledging, the next egg is laid.]

This is being written on Tuesday.  Last Friday I was writing in the dining-room when there was a flurry of cat, a pounce, a squawk, and another pounce.  The cat had Anna in his paws.  I removed her with some difficulty.  She was motionless, one leg clearly damaged, and her eyes covered with the nictitating membranes.   I thought she was dying. 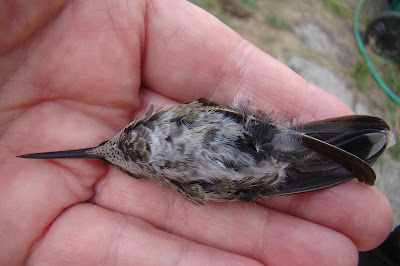 I held her, awed by how much smaller she was to my hand than when I was watching her. Awed by the exquisite brown feathers at the edge of her beak and wing.  Awed that the flash of orange-red-purple gorget we sometimes see comes from 5 or 6 feathers barely 1/8 inch across. 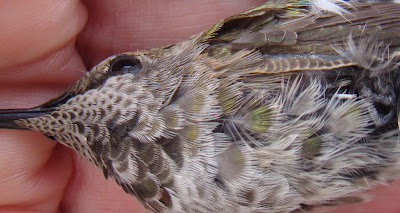 She was very warm to my hand -- hummingbirds have extremely high metabolisms, and her eyelids moved a little.  You can see the damaged wing and left foot in this close-up.  I asked Pierre to bring out the Annas' nest I had found on a sidewalk across the park last summer, so I could compare sizes. 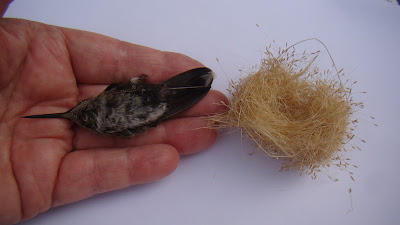 I cupped the nest over her and as I was turning them right side up, there was a flutter and chirp. Anna slipped out of my hand, over the roof of the shed, and into the hawthorn tree.

We didn't see Anna for 36 hours, and we felt sick.  Sick for the loss of her, and sick for the inevitable loss of the chicks in the nest.  Then Sunday I looked out at the HotLips and there was Anna, her wings a mess.  She perched awkwardly on the tomato cage and leaned over to drink from the HotLips. 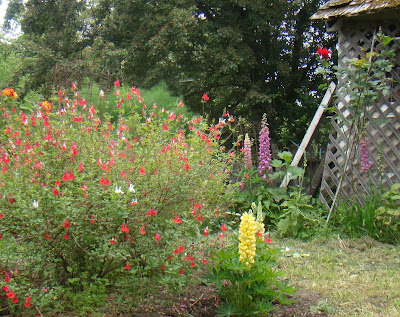 Anna is a small miracle.

[Mid-afternoon note:  Anna is being courted!  The pair fly straight up together, quite high,  and then swoop down to within cat-distance.  A rest, and then up and swoop!]

Brigitte Eckert recently went to Mantua, while on a trip to Venice, and photographed Cleofe's letters for me.  She had gone to Mantua to do this a year ago, in May 2012, and was just sitting down with the letters in hand when the earthquake struck, and everyone was sent out of the library. Brigitte also took the trouble to get the dimensions of each letter. The letters are found in three different buste  in the Mantua archives.  A busta looks like this: 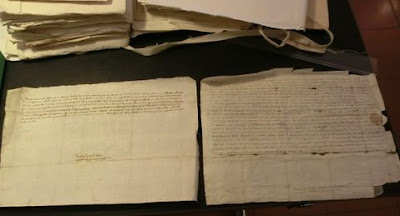 A woman in the archives in Venice once said to me, "We are the perpetual children," because a new busta evokes in some of us all the anticipation of a child on Christmas morning.

Long-time readers of Surprised by Time have often had the pleasure of Brigitte's generosity. She took photographs of the Franciscan church in Nauplion when mine went missing. More particularly, she translated numerous letters by Bettina Schinas née von Savigny written from Nauplion and Athens in 1834-35.

In Mantua, Brigitte examined four letters written by Cleofe, along with letters from Battista Malatesta di Montefeltro to her sister Paola Gonzaga di Malatesta, and from Paola to Pope Martin V about Cleofe.  These six letters have been published and can be found on-line here. 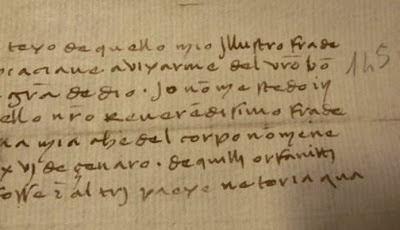 This letter #4 was written on 26 January 1428 to her sister Paola.  It is very short,  seven and a half lines, and she asks for prayer for her soul, she doesn't care about her body. [line 5 "dal corpo non me ne (incuro)"]  Since Conte Riciardo left, she has had no news about Paola's family, and she needs to know how they all are.  She doesn't have time to write more, but Paola can write their brother (Pandolfo Malatesta, Archbishop of Patras) for information.

"Please tell me about our sister's little orphaned children (line 6, quilli orfanitti).  God knows, if I were in another country, I could take one."  Their sister Taddea had recently died of plague, leaving two small children.

This is the last letter, to Paola.,in July 1428.  It is very short, because the bearer will tell Paola the news -- the news being that John, Constantine, and Thomas Palaiologos are besieging their brother's city of Patras.  Cleofe's husband, Theodoros, did not join them: he was deeply engaged with negotiations with Venice over this and other matters, and he was tied up in emotional knots over the question of whether he should leave his position and wife and daughter, and become a monk.

The four Cleofe letters -- and the other two -- are not written on full sheets of paper, but on  pieces cut off a larger folio sheet.  The cuts are not perfectly straight.  Cleofe's paper is of much higher quality than the other women's, thick and still almost stiff nearly 600 years later.  You can see the indication of quality in the first photograph, the closeness of the laid lines that run vertical to the writing.  The seal (traces of one can be seen two pictures up) was red wax, and carried a double-headed eagle.  One of the letters shows a clear watermark, a five-petaled flower quite common over several hundred years of paper-making.  Again, you can see the closeness of the laid lines. 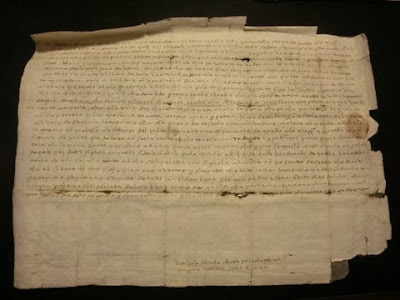 
This is the complete letter from which the signature in the top picture came, and it is shattering.


It was written on 20 March 1428, carried to Italy by the megachartophylax (she writes megha cartofila) of Mistra who was taking the formal announcement of the birth of her baby, Helena, to her father and the pope. (Helena was the heir to the throne of Constantinople at that point.) After her death, the Mistra intellectuals made a point of Cleofe's self-discipline, and you can see that discipline here in the evenly spaced lines* and clear penmanship -- easily readable in a larger image -- despite the fact that she was desperately depressed.  It may be the first description of post-partum depression that we have written by a woman.

The first part of the letter is a cry from isolation: she is begging for letters from home. She returns over and over to the topic of foreignness and distance -- and then possibly suicide:  "Without this grace that I request (letters), I will be unhappy, and my life short and bitter . . . my life is worthless but I would damn my soul in perpetuity . . . the tears do not leave me . . . there is not enough paper to write it all . . . I wish I were dead."  Only at the end of the letter does she mention the new baby, her only consolation.  This is the only letter of the four that is signed vasilisa, which was the title for a despot's wife, and I have wondered if she received the formal title for the birth, or if her use of it is a bit of irony at the contrast between her formal position and her actual situation.

This consuming depression will explain Theodoros' impulse to become a monk mentioned above.  He was, finally, happy to become a father. Nothing in his experience prepared him to cope with a wife in Cleofe's condition.  His pattern of decision-making indicates that his own anxieties pushed him into absolute positions.  That must have intensified her depression. The imperial brothers, and Gemistos and Dr. Pepagomenos, must have worked hard to talk him down from this.

As difficult as it was to read this letter in print, to read it in her own controlled, carefully-spaced handwriting was devastating, even though I had the protection of the distance of a photograph.

* She is using a mistar (Arabic), a form with strings placed under the paper to indicate the spacing.

Posted by Nauplion at 7:12 AM No comments: 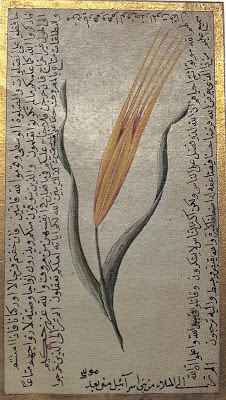 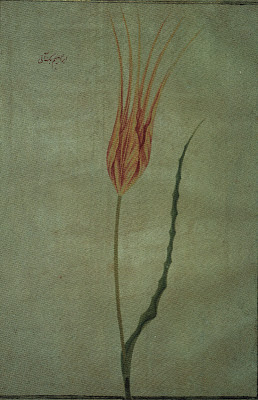 Images from The Tulip: A Symbol of Two Nations.
Utrecht/İstanbul 1993.
Edited by Michiel Roding & Hans Theunissen. 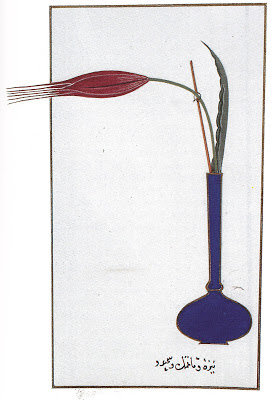 Posted by Nauplion at 7:34 AM No comments:

On Vacation: The Scribe 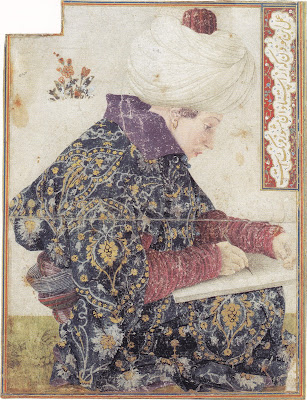