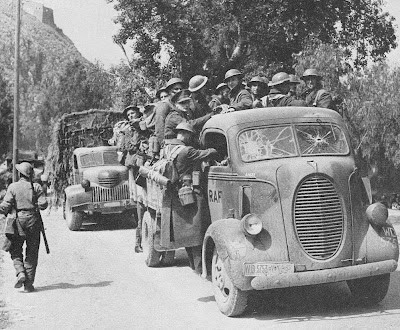 
Continuing the accounts from last week:

We reached the vicinity of "T" Beach on 25th April, after passing through, I think Nauplion & Argos . . . My recollection is of a couple of days spent taking cover in gullies with Messerschmidts & Stukas attacking anything that moved.  . . . One memory I have is of seeing fireflies for the first time -- they do not occur in my country so far as I know.
At last our turn came for evacuation and for the first time since arriving in Greece, I saw the sea.  I don't think there was any moon but we could make out the shape of the ships quite close to the shore, perhaps no more than 100 yards away.  At the head of the queue was a small barge or lighter and I was near enough to it to see a group standing on it waiting to be transferred to the ships . . . Whatever the intention, the barge or lighter did not move at all while I was watching it.  I calculate there is a very good chance I would have been in the next batch to board the craft.  A story went the rounds at the time that the thing was stuck on the bottom because it was overloaded and no-one would disembark to allow it to float free . . . It remained stranded by the outgoing tide and the ship sailed away.
Dawn found us at a village which may have been Tolo.  We set up a defensive perimeter of sorts, although weapons of any kind were scarce, and there was some firing exchanged between us & the German troops who were now appearing in force.  It still had not been realised by most of us that the evacuation was over & that we had been left behind.
During that day I saw the waters of the bay in full sunlight and even in the circumstances I realised why the coastline of Greece was so famous.  There was a small island perhaps a quarter mile from shore and I remember a woman in a small rowboat standing up & calling to someone on the island. (I saw no Greeks in the village at "T" beach except the woman in the boat out in the bay.)  I saw an English sergeant take the ammunition out of his revolver & throw it into the bay.   . . .  In the afternoon there was a meeting between one of our representatives and the German command . . . The news that we were prisoners of war was brought to us by a Salvation Army major, I can even remember his name -- Major Hosier.  It was about 5 o'clock in the afternoon of 29th April 1941.  I cannot begin to convey to anyone the sense of shock . . .
Our imprisonment started with a march of about 3 hours in the early part of the night . . . I am sorry to say that in the doorway of a few houses along the road -- not many -- people stood giving the raised hand of the Nazi salute.   [In Nauplion] we were in a compound at the foot of [Palamidi] next day, 30th April, and looking up the first thing to take the eye was a huge swastika flag flying over the fort . . . I think we spent one or two days & nights there in the open. There was no shelter but that was no novelty if you were in the infantry.


We travelled to Corinth by rail and I think it may have been a narrow gauge railway, in closed trucks, and of course without any contact with the Greeks. At Corinth we spent, I estimate, about two months in a huge compound which I believe had been a Greek military barracks.  There were buildings there, filthy of course, but a least they provided a roof over the head.  In this prison camp we joined another 3000 or 4000 allied troops who had been captured at Kalamata  . . . In addition to about 5000 British, Australian & NZ troops, there were Yugoslav, Cypriots and a few hundred Indian civilians who were said to have been brought to Greece to look after mules or donkeys.  As well, there were a couple of thousand Italians who had been made prisoners by the Greek army near the Albanian frontier . . .
In Corinth we did have some contact with the Greek civil population, in that the Germans allowed the Greeks to set up a few food stalls, just inside there wire, where, if you were lucky enough to have any drachmae, you could purchase such items as dried fruit & the like.  About once a week the Germans took us down to the beach to swim and I remember a Greek woman attempting to distribute a basket of bread among us being roughly handled by the Germans for her pains . . .
The compound at Corinth was a really dreadful place -- open latrines, lice, bugs, and starvation.  We spent two months there &  then moved to Salonika, which was much worse.  The journey to Salonika was by rail & on foot, where bridges & tunnels had been wrecked.  There were many escapes on this journey and a number of fatalities.  Some who escaped lived with the Greek people for two years evading capture at what must have been great risk to the inhabitants who sheltered them.
* * * * * *

There is much more in Bernard Ryan's account which begins with his background in Australia, an interlude in Alexandria, his arrival at Piraeus, rail trip to the north of Greece, and arrival at Veria with the Aliakmon in flood, where their retreat began and he was injured. He describes the retreat, being bombed at the Larissa railway station, passing through Athens, and then comes the section excerpted above.  He left Greece on a train (with a German military band playing "Roll out the Barrel," for prison camp in Germany.

Sometimes the midday sun, sometimes handfuls of light rain
and the beach covered with fragments of ancient jars . . .
Friends from the other war,
on this deserted and cloudy beach
I think of you as the day turns.
G. Seferis