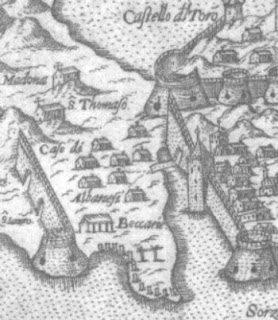 The picture to the left is a detail of the oldest known image of Nauplion and shows the city's circumstances in the 1530s. There is the advance wall of 1480 sealing the space between Palamidi and the shore, the palisade along the marsh, the Albanian neighborhood (they were probably not allowed to live inside the city), the meat market, and the "forks."

That would be the two little forked poles with a crossbeam in the little peninsula left of the moat. And you can see how they worked here or here (upper left).

The forks appear only once in Nauplion's records, which is of course no indication of how much they were employed: the Byzantine and Frankish records are essentially non-existant, most of the Venetian are burnt or lost, and I cannot read the Ottoman. But they come into a court action about a fief, a hundred years before this picture.

In 1412, the podestà of Nauplion assigned half of Giovanni Cavaza's fief to Manoli Murmuri. Giovanni, a Nauplion official and a merchant in linen and wool, had died 6 years earlier. He had also been billing the Nauplion treasury for repairs to his private home and getting Venice to send out timber for it. Other than possession of the fief, Cavaza has no importance here. A fief contained about 200 stremmata of land. The medieval Morea stremma varied between 900 and 1900 square meters, depending on the kind of land, so this definition is not at all helpful, but just over 4 stremmata at 1000 m2 is equal to one American acre. A fief was a lot of land.

This assignment of half a fief to Manoli Murmuri was cancelled by action of three legislative bodies in Venice in April 1413 and the half-fief was eventually transferred to Giovanni Catello in January 1415. This Giovanni was senior member of a very large and progressively powerful family in the city. In 1416 Murmuri's brother Michali, Nicolò Murmuri, and someone's brother named Gregorio -- tried to kill Giovanni. They failed but he was so badly injured that he lost his right hand.

There is a gap of eight years in the narrative. Then in 1424, the Murmuri brothers bribed a rusticus to kill Giovanni. Giovanni was ambushed when he went out to inspect his vineyard. Again, he survived the assault, though he received five wounds. The rusticus disappeared.

The brother of the rusticus testified against him and named Michali, Nicolò, and Gregorio as responsible. Catello's complaint to the Venetian Signoria in 1424 sought legal action against the three: the rusticus was not the real problem. Signoria, however, declared that when the rusticus was found, he was to have his right hand amputated before he was hanged from the “forks.”

We have no idea what happened to the rusticus.

Posted by Nauplion at 5:00 PM No comments:

A long entry, after two short ones.

Isabelle Villhardouin was a true princess and a lady, but as a princess in the 13th-century Morea, the realities of life did not allow her what a woman of her character and intelligence deserved.


When she was a child in the mid-1260s, her father, Guillaume II of Villehardouin was militarily insecure. To guarantee military backing, he, together with Baldwin II, ex-Emperor of Constantinople, ratified the Treaty of Viterbo with Charles I of Anjou. This meant that Anjou would inherit the Principality of the Morea after Guillaume died, sealed by the betrothal of Isabelle to Anjou's young son, Philippe; and that Anjou would inherit title to the Empire of Constantinople, sealed by the marriage of the Emperor's son Philippe to his very young daughter, Beatrice.

There were about a dozen of these children, young Angevins and their betrothed, all being raised together in the French-Italian court of Naples with a surround of troubadours, manuscripts, and warriors. Isabelle and Philippe were formally married when they were twelve, but the agreement had specified that she be protected from sexual relations until she was older--old enough for a reasonably safe childbirth.

Philippe died in 1277, probably before they got that far: he had always been unwell, and a great deal of the marriage had consisted of trips to healing shrines and hot springs. Isabelle's father died the next year, Charles of Anjou became Prince of the Morea [inherited from his son], and she was retained in Naple's Castel dell'Uovo. She must have felt uneasy there: her aunt Helena, widow of Manfred, had been imprisoned with her son in the Castel since Manfred's defeat and death in 1266, and Villehardouin surely knew something about that when he agreed to the treaty in the following year.

Isabelle's mother, Anna, and Helena, were daughters of Theodora of Arta and Michael Komnenos Doukas. Theodora was later recognized as a saint, and while her vita does not mention these daughters, they were clearly raised with character and with good educations. Theodora's focused intelligence comes through Anna to Isabella and her sister, Marguerite: we have no idea if they were able to keep in touch with their mother after their marriages. They also had their father's focused energy. So much focus brought them frusration and disappointment, again and again.

Guillaume II, Prince of the Morea, died in 1278, and Anjou sent out governors, These were considered harsh and extortionate, but the best we can tell is that they were trying to rationalize taxation and administration in the Morea the way that Anjou's brother, Louis XI, had done in France, to similar objections. Nevertheless, the Morea and Anjou were under great strain for a number of years. Anjou had the Sicilian Vespers, war with the Aragonese. When he died in 1285, his heir, Charles II, was a prisoner of that war.


In 1289 Isabelle married Florent of Hainaut, who was related to the family of the ex-emperor and to the Avesnes family of the conquest of Greece. Whether this was an arranged marriage -- Charles II, though somewhat older, had escorted her to her marriage with his brother, and he might have actually been fond of her -- or whether it was an arranged marriage that suited her admirably, it turned out to be a good marriage. Charles II granted them the titles of Prince and Princess of the Morea on their wedding day, and sent them off to straighten things out in Greece. Which they mostly did, Florent in the north and west out of Andravida, and Isabelle in the south near Kalamata. They had a daughter, Mahaut or Maud, and then in 1297, Florent died unexpectedly. Isabelle continued in Greece.


Then like so many unwillingly single women of her age--she was 40, Isabelle decided to travel. She went to Rome for the Jubilee of 1300, the one about which Dante said, "I had not thought Death had undone so many." In Rome, she met a certain Philip of Savoy. She was far from being the only woman d'un certain âge to be smitten by a younger man: he sent her little presents, he took her on moonlit walks by the Tiber, he admired her sophistication, so unlike the silliness of younger women. Or maybe he didn't. But she was quite overwhelmed by him and they were married.


The bill for the wedding feast of 12 February 1301 still survives. The meats included 2 cows, 12 sheep, 9 pigs, 72 small birds, 8 goats, 24 pheasants, 50 ducks, capons, fowls, doves and egs. That took care of the protein. The bill goes on to list vinegar, rosewater, farina, salt, raisins, bread, fruit, 4 kinds of wine, 200 pounds of almonds, 27 pounds of sugar, 8 pound of pepper, 6 pounds of ginger, 3 pounds of cinnamon, charcoal, firewood, wax and torches,10 men to make sauces, transportation of the food, 31 horses, reeds and herbs for the banquet hall, planks and supports for the tables, payment for three master cooks, and beds for the servants for the nights before and after the banquet.


The romance lasted just about as long as the banquet. Charles II reluctantly sent them to the Morea to continue the Angevin-Villehardouin rule. Philippe took along his friends. Altogether they brought with them a whole new frat-boy layer of arrogance and violence, and the chronicles that admire Florent list Philippe's brutalities in detail. The Andravida branch of the Peruzzi bank of Florence was involved. Philippe also ignored Charles' directions. The Moreote peers rebelled and wrote Charles. The Greek archons were on the verge of rebellion, and this was more serious. Charles recalled Isabelle and Philippe on the technical grounds that she had lost her right to rule for marrying without permission.

Before this happened, in 1305, Isabelle arranged the betrothal of her twelve-year old daughter Mahaut to Guy II de la Roche, Duke of Athens, clearly with an eye on the possibility of the original Frankish families regaining their position. Mahaut was taken to Athens to live with Guy's mother until she was of age for marriage. Trying to go out with heads high, Isabelle and Philippe held a tournament at Corrinth 1307, one attended by 1000 knights and barons from all over Greece and the island, and seven professional jousters from the West who took on all challengers. Guy of Athens performed spectacularly.She left Philippe as soon as she arrived in Italy, ignoring Charles' offers of property and money, taking with her their daughter Marguerite to live in Hainaut on the lands Mahaut had inherited from her father.

Other than always keeping the loyalty of the Moreote Greeks, both for herself and for her family's loyalty to them, that was about it. Isabelle died in 1311, at the age of fifty. Marguerite married a knight of no particular status and died without children.
Posted by Nauplion at 7:14 AM 3 comments: 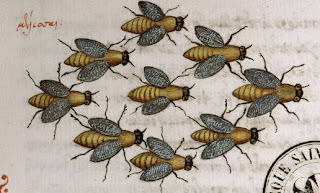 If you are a Turk, the Greek Palia-Patras, Old Patras (not to be confused with New Patras near Thermopylae) sounds like Bali-Batra, which means Honey-Patras. And this is a true and rightful name because, as Evliya Celebi writes, there is no equal on earth or in all the inhabited quarters of the seven climatic zones to the great cypress tree of Patras, created by God:

This is a mighty tree, a cypress a green as emerald, which is under the special care of that ever-watchful Gardener, the Supreme Creator and Artificer, the Glorious Lord. In all the embellished heavens under the ninth sphere there is no sight like it. It is not tall and straight like other cypresses, but forks out in four trunks, from which spring three hundred and sixty branches reaching to the sky.

As these push out to right and left, forty or fifty picket-lines of horses might be tied in the shade, and forty or fifty thousand sheep might be shaded there. Around each upper trunk, a full fifty or sixty horses could stand, while lower down I and seven young slaves hardly managed to encircle the great main trunk with our arms outstretched. We also unwound a turban from a man's head and the full turban cloth just encircled this tall cypress tree.

In conclusion, at the top of this wondrous cypress threre is an old cavity where honey-bees have made a nest, and produce so much honey that the owner of this tree gets a hundred kilos of honey from it every year, which he sends round as presents to the great men in every province.

God knows, on the face of the earth there has never been a sweeter, purer and more aromatic honey created by the Maker of All Things.

From Evliya's Travels in the Morea © Pierre A. MacKay.
Posted by Nauplion at 5:00 PM No comments: