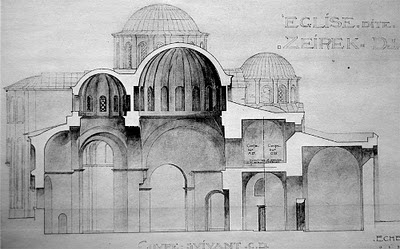 The churches of the Monastery of the Pantokrator,
now the Zeyrek Çamii, where the last Palaiologoi were buried.

The Byzantine Studies Association of North America begins its annual meeting Friday, this time in Chicago. I will be speaking on the construction of the throne room wing of the palace of Mistra which was built about 1430 under the aegis of Theodoros II Palaiologos.

I have apparently written about Theodoros in sixteen other entries, and I have written with increasing despair. Recently Pierre MacKay translated for me the speech Scholarios made after Theodoros died, which adds considerable nuances but does nothing to alleviate the despair.

Theodoros died in Selybria in June 1448 of plague, and was buried with his father and brother in the Pantokrator in Istanbul.  He had exchanged Mistra with Constantine for Selybria in 1444, anxious to be close to Istanbul where their brother the Emperor was increasingly weakened from gout, sure that he was entitled to inherit the throne.  George Gennadios Scholarios, the High Judge of the Court of Constantinople, spoke at the memorial before John VIII and the court. Possibly his brother Demetrios was present, and certainly his mother, Helena. Scholarios began:


I have put off my speech about the deceased brother of our mighty emperor until this day, in the third month after his death, not because I had no sense of what to say about him, nor because I thought it was proper to add my silence as one more misfortune for him but (the truth will out), understanding that that the enmity that many feel for him will have abated over time, and that thus, more reasonable judges of arguments in his favor will be found, and that those who are absolutely intolerant of listening to this memorial utterance will be less offensive toward me.

His own feeling, and the enmity in the court, had been so intense that the eulogy had to wait for three months. This enmity is somewhat explained later in the speech, but some things have to be deduced.  It appears that certain people had urged Theodoros in his desire for the throne, probably because John had been very ill.  Scholarios spoke in September.  John died the end of October.  Fortunately, Theodoros died first:


He did not cause loss to any of the Greeks, but as he was on the verge of doing so or, as it seemed to some that this was so, he departed this life, which is his good fortune, that in such an evil circumstance he succeeded in doing nothing that was irreparable.

Scholarios spent considerable time at the beginning of his speech discussing how each of us has failings, and people have to be judged by the totality of their characters and not just by one incident.  He admitted that Theodoros was a fair and just ruler, and he was most respectful of his parents.  Then Scholarios cut loose and spoke of the Turkish incursion of 1423  and of the subsequent assault on the Isthmus of 1446.

There is one thing that one might blame him for, if one failed to give it proper thought, that fecklessness about the Isthmus of Corinth, which led to his being defeated, the people of Peloponnesos being taken captive, and a great many being killed. But if one were not to acquit the man of this, neither will his brother's actions be spared . . . It would not be right for the most stalwart Constantine to be deprived his praise for this . . .  nor should anyone burden his brother with responsibility for not setting up the wall strongly in the first place. That, the earlier and also the later collapse of the wall was a matter of the vileness itself of those living within the isthmus, as were the misfortunes that oppressed the entire Peloponnesos . . . the Peloponnesians knew not how to come to a call for aid, nor, if they did come, how to defend the land and keep it safe, being unwilling to confront the enemy, or, if they did face up to him, not having the courage to endure and to overpower him but rather to desert and run . . . while those who were destroyed by their own cowardice of spirit and intention seem to the observer who knows nothing about the defects and sicknesses of the ruled to have been ill-generaled and badly governed. The present population of Peloponnesos can be said to be heirs of the land and the name of the race only, but of the virtue of their forefathers they they have not even what might seem to be the expected inheritance of bastard offspring. 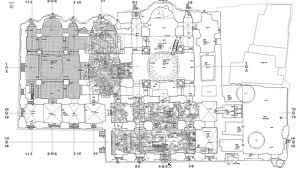 Floor plan of the Pantokrator.

In 1423, the troops of Turahan Bey had come all the way to the walls of Mistra before returning home, and it was the Albanians alone -- "those laborers who had taken over Peloponnesos" -- who made any effort to stop them.  Those would be the same Albanians whom Manuel had praised for their work in building the wall.  Coincidentally, it was in that year of 1423 that Theodoros was considering becoming a monk.  Recently, in the winter of 1446, Constantine and Thomas had to defend the Isthmus against Murad II, the Greek troops cut and ran, and the brothers barely escaped alive.  Murad's troops went as far as Patras before turning back.


Scholarios gave personal information, some of it a little surprising.  I had not expected Theodoros to have such physical interests:


Was he not strong? Was he not athletic? Was he not a fine rider capable of guiding an untrustworthy horse down a hillside? Was he not ready to set his hand to anything that anyone might have conceived in reason? Was he not superior in dexterity of hand and nature to the masters of crafts? But all this is a matter of physical skills.whereas he was better in more important thing: he was a lover of learning, a quick learner and thus a polymath. I shall pass over the rest, but in calculation, and geometry and in the so-called organizations of the sciences who was there who handled such matters better in both theory and practice?


Just possibly, Theodoros talked a great deal too much.  Scholarios is complimentary, but still:

In quickness of tongue, grace flowering in words, and cleverness in conceptions whether with or without training, I do not think there was any one at all who could equal him. Rather I think it came to him from God. Who, on hearing him speak would not forget his own circumstances, who would not be delighted and would not beg to hear more, as it flowed continuously, to the extent that they were able to neglect their necessary concerns.

Apparently, his interest in becoming a monk had started even before he was married, in 1421.  Scholarios makes only the most limited mention of his marriage and family:

Such a man he was, zealous in his private self, and happy in public goods. He was blessed with a distinguished marriage and proved to be the father of a fine child resulting from this marriage with a most distinguished family, and came to a similar end. He did not enslave cities, nor place a yoke on peoples.


Scholarios' information combined with the letters Bessarion wrote to Theodoros (links below) -- quite apart from the information we have from his marriage, gives us an exceptional portrait of character and personality, for any Palaiologos, and certainly for the period. It is not a pleasant portrait.