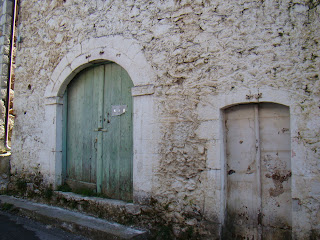 Kostis Kourelis wrote recently about stone masons in the Morea.  He gives me the explanation for some photographs I took in the interior of the country after Jack Davis called my attention to the stone clamps on old houses:

"In summary, architectural labor from the 18th to the early 20th century was organized in itinerant groups of masons. They would specialize on the finer aspects of construction, such as the corners, quoins, the windows, openings and roofing and would hire local work for the unspecialized work, such as building infill walls."  Such construction is shown in the next pictures. 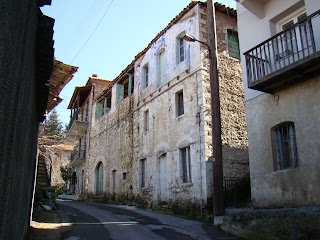 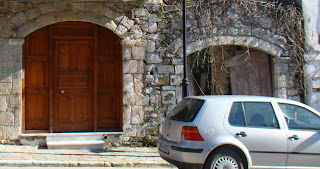 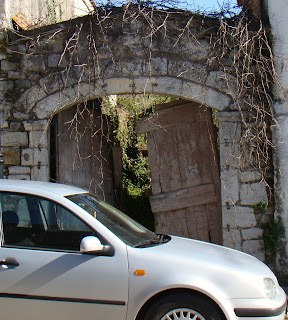 Stones were secured with iron clamps, and each group signed its work with its own design of clamp. You can see at least 8 of them around the large doorway -- click to enlarge --  in the photograph at the top, and at least 6 around the smaller. Similarly, you can find at least 8 clamps for the left-hand doorway in Leondari and 10 for the second.

Here are two such signatures from a group that worked in Tegea: 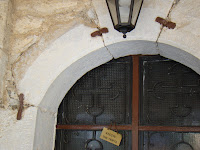 All the other towns here are mountain towns.  Mountains are made of stone.  Tegea is on flat, damp land.  These Tegea houses were immediately around the remains of the temple of Athena Alea and were built of its stones.  I was there two years ago with a learned group, and there was an interminably long lecture about the remaining stones of the temple.  No one seemed to care, or even notice, all the stone houses -- with their spolia.  Tegea houses are plumped full of spolia, like puddings with raisins.

Apparently a great deal has been written about these clamps, and many photographs taken, but they were new to me. 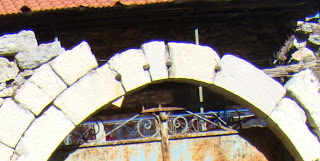 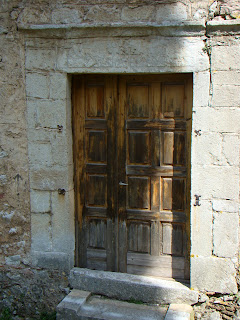 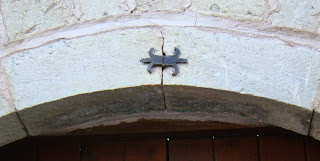 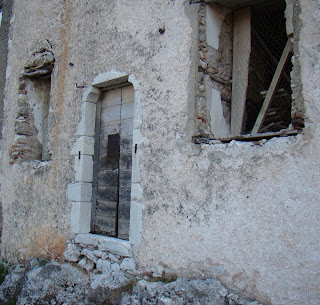 Many of these itinerant groups were Albanians and there was a new wave of stone workers in the 1980s and 1990s.  These were the men I saw working on the palace at Mistra when I was there in 1995. 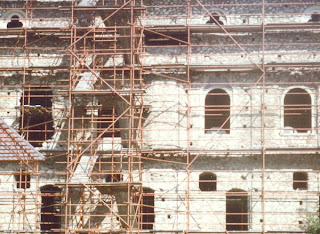 I like these continuities: so much of Greek history has been discontinuous.  In 1480 and 1480 when Bartolomeo Minio was rebuilding the walls of Nauplion, he could find no one who knew how to build in stone.  He had to have five masons and a master-builder sent out from Venice.  Travelers write about the shabbiness of Venetian towns in Greece and their proneness to fire.  I found good evidence that Venetian houses were for the most part wooden, at least above the ground floor, and standardized sizes of planks and nails were shipped out from Venice for their construction.

There was no Morea-made iron in the 15th century. Minio had to order clamps -- and nails, and anything of iron -- ready-made from Venice, again in standardized sizes. Already before 1420, Plethon had worried to Manuel II and Theodoros II about the lack of local skills and Moreote dependence on foreign imports,  In the 1440s, Bessarion wrote Constantine, concerned about the lack of Greek skills -- iron-working was one he particularly mentioned, along with ship-building and weaponry -- and suggested that eight young men be sent to Italy to learn. More on that later. 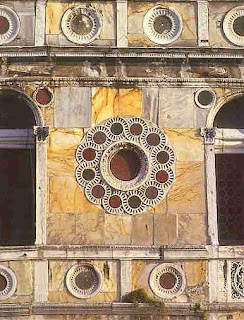 This is what four of the top names in Venetian architecture have to say about them: 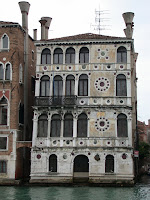 We don't have any documentation for Dario's restoration of the little Gothic house he was given on the Grand Canal, but various things make 1486 look about right.  After he returned from Constantinople in 1485, Dario was treasurer of the scuola of S. Giovanni Evangelista which Pietro Lombardo was redecorating in 1485. During the 80s, Lombardo was also supervising the construction and ornamentation of the Miracoli.

So it would not have been unlikely for him to have worked with Dario on turning the little Gothic house into a jewel box.  The Lombardo new constructions were highly symmetrical, Venetian Gothic wasn't, and apart from the asymmetry, the slanting slightly-drunk walls show the medieval fashion for building Venetian walls wider at the bottom than at the top.

As you can see, there has been a remarkable amount of extravagant prose expended in an attempt to explain Dario's choice of ornamentation, and especially for the interlaced circles.  They are infinitely pleasing, but they are no more Byzantine than they are late Roman and Venice was always a part of the Byzantine world.  We find these circles all over the place in the 5th and 6th centuries, and they reappeared in the late 12th century as far away as Westminster Abbey 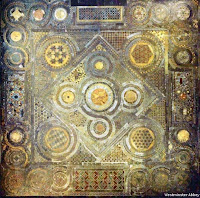 when the Cosmati set the fashions for church ornamentation a century and a half before that Egyptian "precedent."  S. Marco was nothing if not fashionable, and they ended up all through the rebuilt 13th C church in explorations of the variety of ways of interlacing circles -- on crosses antique even then,

on carvings over the doors,

on the floor of the narthex, 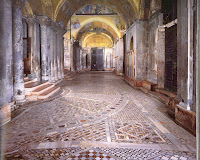 on the floor by the pulpits.

And on the south side, facing you when you come up from the water. 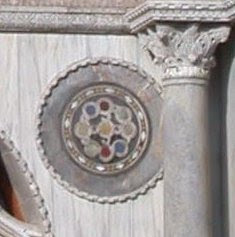 The Cretan, Giovanni Dario, was in love with Venice and called her quella cità sancta.  Ego? He had pulled Venice out of lethal situations, twice, with the Ottomans, and had several times worked wonders in Cairo.  Venice thanked him with what has become everyone's favorite house in Venice.  It seems silly to go to so much trouble for explanations -- Byzantine (the lack of survivals in Constantinople make this anyone's guess), Cairo?

a painting (a painting done several years after Ca' Dario)?  Dario saw  interlaced circles all over S. Marco and all over most other Italian churches he visited.  He saw them on the Miracoli.  Why would he not have chosen Venetian motifs for this house he dedicated the Spirit of the City?

There are more details here. 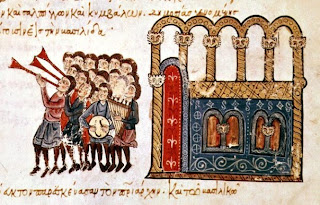 Enjoy the Dumbarton Oaks theatron: Of Mice and Muses.

And the script, translations by the best: 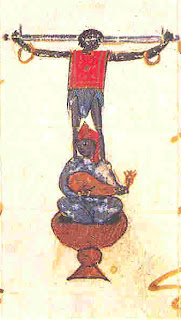 Posted by Nauplion at 5:00 PM No comments: 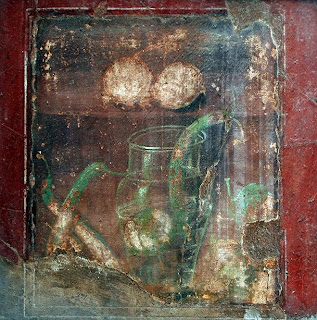 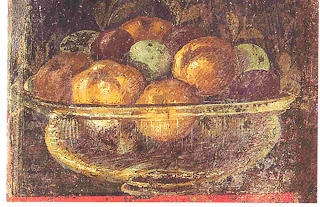 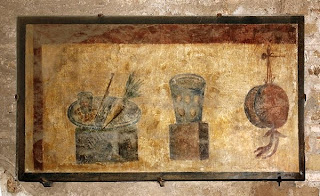 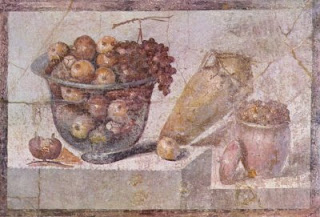 I am fascinated by frescos of Roman glass. These come from Poppea's villa in Rome, and villas at Pompeii and Stabiae.
Posted by Nauplion at 5:00 PM No comments: 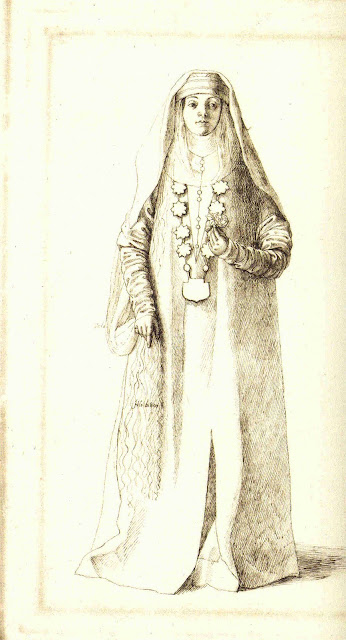 Drawing of a Greek woman, Gentile Bellini 1480.
Posted by Nauplion at 5:00 PM No comments: