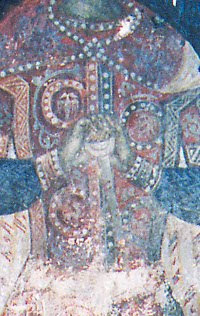 Theodoros II Palaiologos has been a tremendous disappointment. It shouldn't have been a surprise, given his isolated and distorted upbringing, but there were opportunities where he might have become a better person. I have written about Theodoros more than once, here in particular, and as information collects and sources get translated, my view has been altered.


Regardless of his philosopher father and the philosophers of Mistra -- and, in fact, what we see of Theodoros is no recommendation for any of them -- his heart and courage were starved.  So we see him, when faced with stress -- marriage in 1421, Ottoman assault in 1423, fatherhood in 1428 -- isolating his bride, dithering agan and again about retreat into a monastery, ignoring his child.

In the period when things were good, he became expansive, took on showy public works -- and I am dating the great palace wing at Mistra to this period -- and while I have changed my mind slightly about  the date of the poem I wrote about here, it and the great gold embroidery fit into this period.
He might have learned something from the Kleope experience.  He had finally come to love her, even enjoy her in bed and as a scholarly companion, and despite the horrific shock of her death -- two sources talk about the sudden gush of her blood and one says that Theodoros was spattered with it -- he was able to force himself to a remarkable level of discipline in that first month of grief, enough to write an intricate, highly organized, and deeply loving poem.  That was in 1433.  He may have still been under her influence --maybe the project was already started -- when he wrote the long poem for his parents and ordered up the embroidery.  He clearly had ability at writing, and he should have written a lot more, but he had no one now to serve as muse and editor
Then in 1436 he went to Constantinople, his first visit since he left in 1407 at the age of ten, taking the embroidery and the poem with him.  He came on the same ship as Zoe Paraspondylos who was married to his brother Demetrios a few days after they arrived.   John VIII, gave Theodoros a magnificent processional welcome, and despite the fact that The City was half empty of its population, the infrastructure deeply eroded, the palace poky and crowded, he was  thrilled to be there.  He apparently ignored the fact that he had a motherless seven-year old daughter in Mistra, but then his brother Andronikos had been shipped off to be despot of Thessaloniki when he was seven.


Bessarion was already in Constantinople, in residence at a monastery, and the closeness they had had at Mistra for a couple of years seems to have been forgotten as Bessarion wrote Theodoros letters even though they were in the same city -- two survive -- and they are stunningly revealing.  We have many letters written to Manuel, and despite the florid style apparently required of Byzantine letter-writers, there is much sense of friendship and loyalty.  The language of Bessarion's letters to Theodoros is as extreme and formal as the species can get, and the evident cravings of his personality, exposed to the flattery at the imperial court, are not attractive. 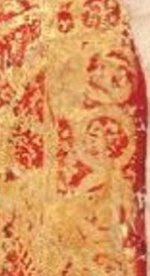 The letters also give a momentary glimpse of an almost childish personality, Theodoros -- in his 30s -- dancing about and claping when someone in Mistra described some glory of The City. Now he was actually there, and Bessarion shows us Theodoros' excitement over the architectural treasures, the churches that made Mistra's look negligible, the great houses that equaled anything he had as a palace back home.  He seems to have been particularly interested in relics, and he was wallowing in the homage paid him by all sorts of important people -- all of whom seemed to find him tremendously important.  He decided that he would stay in Constantinople and be the heir to the throne.  It could happen any time, really.  John had been extremely ill, expected to die, four years earlier, and suffered from what was probably rheumatoid arthritis.
So it was decided among the brothers that Theodoros would remain in Constantinople, and that Constantine would replace him at Mistra as Despot.  That would leave Constantine and Thomas in the Morea, and Theodoros and Demetrios in Constantinople where, presumably, John could keep an eye on their ambitions.
Constantine left for the Morea in June, and almost immediately Theodoros followed him, not being able to bear actually giving up his position.  This had happened before, in late 1428, when he was so sure he wanted to go into a monastery that Constantine had been sent to take over.  Theodoros changed his mind then, which set Constantine off on the sequence of conquests that eventually acquired Patras, the Tocco lands, and Achaia for Greek rule.  Enough was enough.  Feelings ran so high this time in 1436 that Constantine and Thomas collected an army, while Theodoros collected one on his side.  Outright internecine war was barely avoided, and John sent over two representatives to work out a settlement.
They settled that Constantine would go back to Constantinople and that Theodoros would remain as Despot in Mistra.  He seems to have been the only brother not involved in some way in the Florence-Ferrara conference. It is from the years after this that we see Venetian complaints about Theodoros -- or his people -- making attacks on Venetian territory, and seizing the Thermissi area from Nauplion.  He married off his thirteen-year old daughter, Helena, to King James of Cyprus.  She was miserable, and seems to have spent considerable time making others miserable.
In 1443 there had been letters and negotiations going back and forth, but in June Constantine left for the Morea and in December Theodoros arrived in Constantinople, having travelled back on the same boat had come over on.  He was given Constantine's appanage of Selybria, now Silivri, just south of Constantinople on the Sea of Marmara. It was still a city of some significance, just inside the end of the Anastasian Wall, on the edge of what remained of the Eastern Empire in Thrace.
That is about it.  Nothing more is said about him except that he died in June 1448 of plague, a wretched death with extreme fever and vomiting blood.  He was buried in the family burial church of the Pantokrator in Constantinople, near his father.
The images all contain Palaiologan monograms and eagles.  The two bright ones are from frescos in the Kariye Djami in Istanbul, one is from a cave church at Lake Prespa, and the red one is Theodoros himself as a small boy in the Paris ms. family portrait.