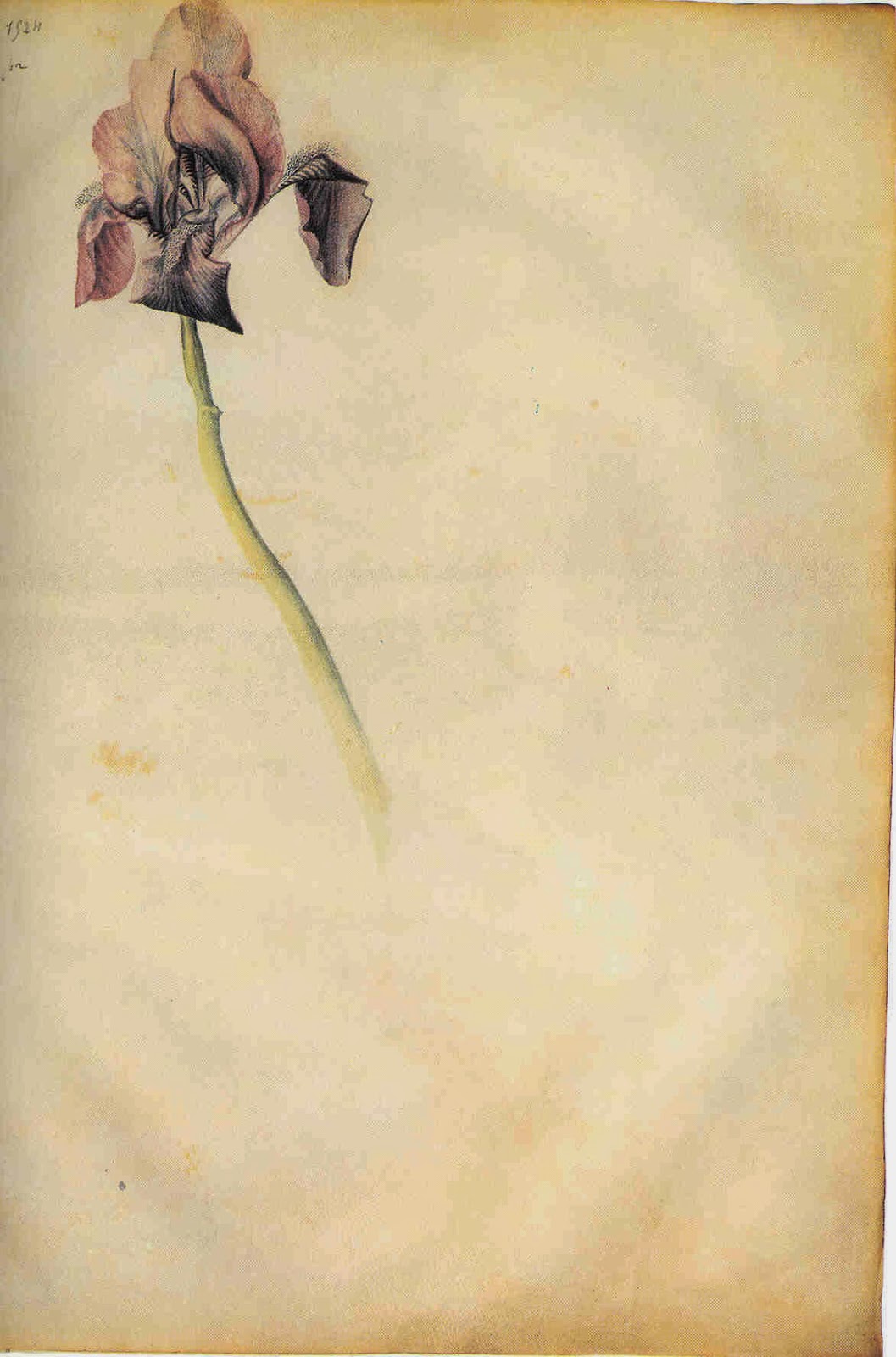 This is the 341st post for Surprised by Time since we began in June 2008 and there is a finite amount of material for the fifteenth-century Morea, the focus of Surprised by Time. I have been finding it more and more difficult to identify topics, and long-time readers will have noticed recent repetitions. Today I thought I had written a satisfactory entry, until something made me look back and I found I had already published it a month ago.  Circumstances have made it difficult to have the time to research topics not in my direct line of writing, and there is a dearth of art catalogs that excite me.

I have decided to take a leave of absence until early April. Perhaps more material will come to hand, perhaps it will be time to end, but time will continue to be surprising. I am grateful to my readers. Many of you have made yourselves known to me, and some of you have become close friends.

As of writing this, Google tells me I have had 256,669 page views. Google started counting some months after I began, while the counter I have used from the beginning tells me I have had 226,043 page views. That is a difference of 30,000-plus. Either way, Surprised by Time has had a generous share of the viewers who have a choice of some 239,000,000 blogs.  I average more than 150 viewers a day. The blog with the most viewers as been "Nick the Greek," mostly because of searches for Magellan's ship Victoria.  Because Nick was from Nauplion and a survivor of the first sailing to circle the globe, I had hoped Nauplion might be prompted to make a gesture in his honor.  Nauplion has so far appeared impervious to any of the many entries I have written about this small city I love.  The second most-viewed blog has been "Africans in Renaissance Europe: Black as Accessory, Black as Human." The third is "Rooms with a View," one to which I return weekly for the exceptional lyricism of those paintings.

Meanwhile, spring is coming in Seattle. A surprise iris has been blooming for two weeks. The front yard has a mass of yellow crocuses to the left, purple to the right. The south-west corner is dense with snowdrops, and all the flowerbeds are crowded with the green shoots of bulbs. There are minute buds on the grape vines, and the olive tree has new leaves the size of eyelashes.

A pair of young crows has been courting beside the house, and the crow-calls have become more musical. A brilliant Townsend's warbler has reappeared at the feeder. The Bewick's wren has been singing his heart out from the tops of the two hawthorn trees. We are deeply concerned because the Anna's hummingbird has not appeared for a month. We saw her daily during the weeks when the temperatures never got above freezing, but since it has been warming, we have missed her.

Pierre is having a birthday party.  I am making a Reine de Saba cake and an onion tarte.

This wonderful Bellini iris seems to represent a great question-mark.  I don't know what the question is, but it is much more profound than just what happens to this blog.  I will return in April.  I welcome any ideas and questions you want to offer. 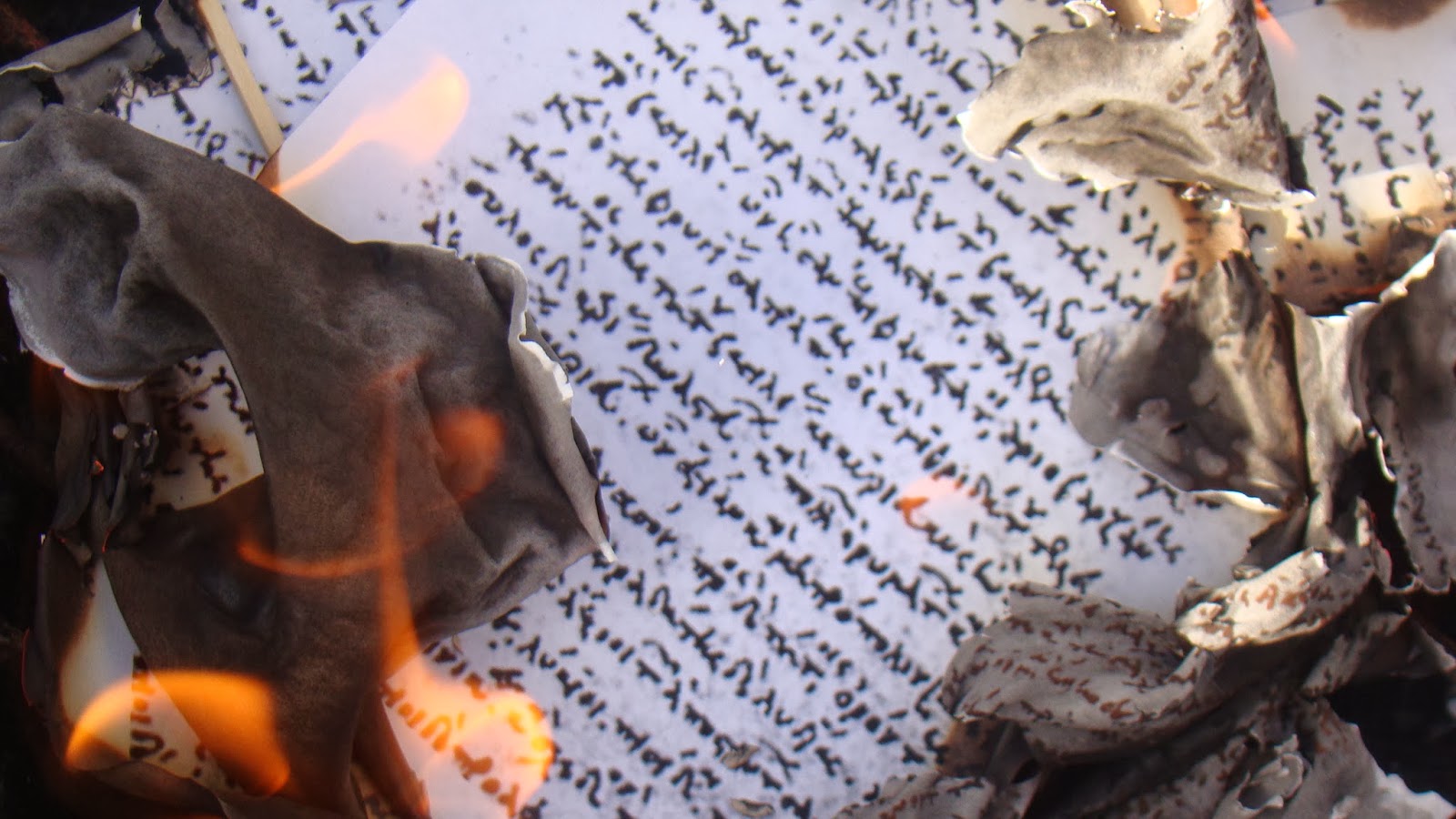 Burning a book is not easy in the normal course of events. Several years ago I needed to dispose of a disintegrating Bible. Understanding that burning was the respectful way to deal with it, I pulled up a stool to the fireplace and started putting pages into the fire. Only a few pages would burn at a time: even a small stack of pages was too dense for the fire to get adequately into the fine paper. It took a very long time, and I became intensely anxious, because it was as if this book had its own will and it was not willing to be destroyed.

George Gemistos Plethon did not have such fine paper: his paper would have been easier to burn, particularly if a page or two were ripped out at a time and ceremoniously deposited in a brazier. We don't know how it went.

When Mehmed took his Mistra guests -- Demetrios Palaiologos and Theodora Asanina -- with him to Adrianople in 1460, they took in their luggage the formal copy of Plethon's Laws. There is no reason to think that Demetrios had a problem with Plethon -- his sons were members of the despotate administration, but Theodora certainly did and when they stopped in Serres, she sent it the book off to Scholarios who was living as a monk on nearby Mt. Menoikeon.

Scholarios read the Laws, he said, in four hours, a tremendously upsetting experience that left him in tears, though that four hours allowed him time to make a list of chapter headings, and a summary. He sent the book back to Theodora directing her to burn it. Theodora had lived long enough in Mistra, six years while Plethon was still alive, to have a sense of his authority, and she couldn't bring herself to do so. She sent the book back to Scholarios who looked at it again to see if he might preserve the sections on logic and science. Even those sections, he claimed, were too bound up with paganism, and he burned it himself, in a public ceremony. That's why I thought of a brazier, and used one to burn the photocopies.  Scholarios kept a few pages for evidence, should it ever be necessary to justify his behavior. He also wrote that any other copies or parts of the Laws should also be banned, and anyone who refuses to cooperate should also be banned from the Christian community.

Where they burn books, they are likely to burn people. A few years before this Scholarios -- also safely in a monastery -- sent a letter to the Morea vividly describing how a heretic should be tortured and then burned. He was circling in on Plethon's followers.

Plethon had, in the Laws, recommended burning for those guilty of bestiality, pederasty, rape, incest, and men guilty of adultery. (Notice that these are all perversions of the sexuality he considered divine.) And the sophists who attack our beliefs. But these judgments need to be discussed by a tribunal, and the circumstances of the accused investigated, because maybe he wasn't properly educated, and maybe he could be straightened out by a time in prison.

Some of the information here comes from John Monfasani, "Pletho's date of death and the burning of his Laws," Byzantinische Zeitschrift 98/2 (2005) 459-463.

Manoli Blessi: the man who never was 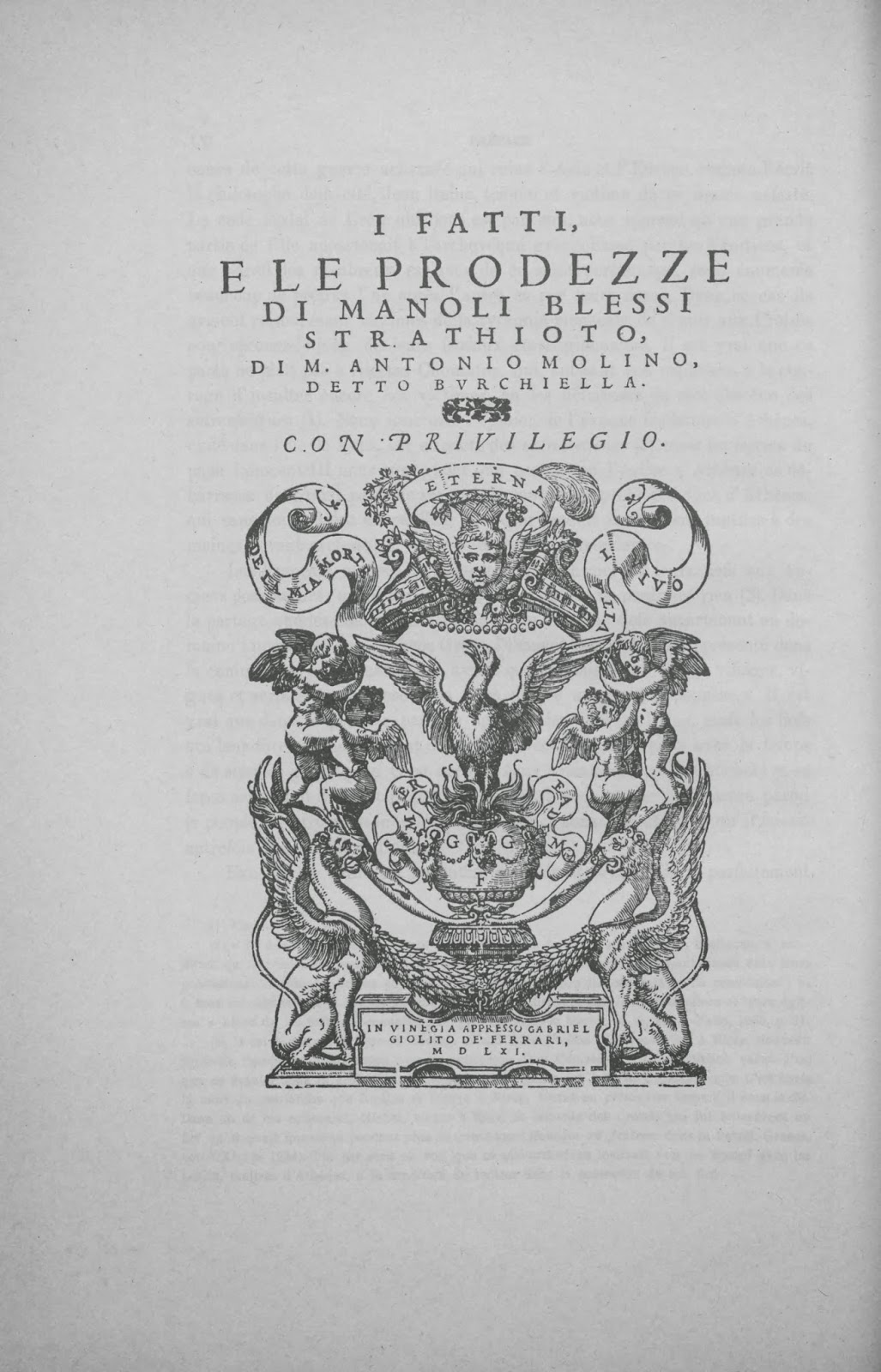 
Having seen two blogs in the past month that went on at some length about Manoli Blessi, stratiote and poet/song-writer, I find it necessary to say that Manoli Blessi never existed.

These are written in greghesco, a 16th-century stage impression of the Greek-Venetian dialect. We cannot know how closely this represents the normal expression of second- or third- or fourth-generation Greek-Venetians, but it is great fun.

What is particularly striking to me here, is that these are all names of individuals (and villages) from the Nauplion area (and mostly from the period of Bartolomeo Minio), and it is fascinating to find a work by a Venetian in 1561 that remembers Petro Bua who died about 70 years earlier. These names certainly suggest something about Molino's informants.

What is also striking is that Sathas (8: 471-2) prints the dedication of Molino’s book which makes it very clear that Manoli Blessi is his creation. Very few have noticed that. Sathas didn't notice it (4: lvii-lix; 7: liv-lxiii, which includes the image above). The Ελληνική Βιβλιογραφία (Athens, Grafeio dimosievmato tis akadimias Athenon, 1984-86) didn’t notice it.

The dedication of Molino's book seems to have been written by a Lodovico Dolce.  It assures the Magnifico e Valorosissimo Signore Giacomo Contarino, who probably paid for the printing, that Molino is a most honored citizen of Venice, ornamented with many virtures, and that since boyhood he has endeavored to master all the abilities of a civilized man.  Molino has spent much of his life as a merchant, and while in Corfu and Candia he became interested in comedy.  On his return to Venice, he started an academy of music, and to finance the academy, he took up writing comedies.  There is more, about art purifying the soul, and the importance of Petrarch, Virgil, and Homer, and such, but that really has nothing to do with the life and works of Manoli Blessi.

This entry has made use of Marc D. Lauxtermann, "Linguistic Encounters: The Presence of Spoken Greek in Sixteenth-Century Venice," in Renaissance Encounters: Greek East and Latin West, edited by Marina S. Brownlee & Dimitri H. Gondicas.


The volumes of Sathas are downloadable here.

Posted by Nauplion at 6:00 PM No comments: