We is probably related 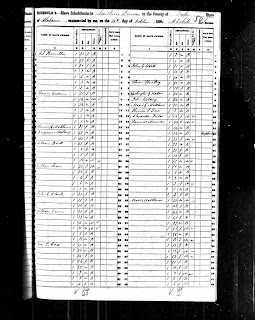 Fifty years ago when I was the young mother of small children, we lived in the family neighborhood of Chevy Chase, DC.  Over several months I had the occasional knock on the door, a man asking for food. It was odd in that neighborhood -- you had to go there deliberately. It was not where you came to leaving the train or bus or truck stop. I noticed that the knocks came shortly after my husband had left for the Capitol, but there was nothing disturbing about them, only that someone needed food.

I fed people good Southern breakfasts, made conversations, gave them whatever I had available in the way of clothes. They called me "ma'am", bounced the little girls on their knee, offered to do yard work for me.

The last person who knocked was quite tall, strikingly handsome, and looked exactly like my grandfather.  When I opened the door I asked him where he was from.

And I was too young and too self-conscious to question him further, to get names, addresses.   But during the demonstrations recently for Black Lives Matter I remembered "We is probably related" and began to weep.  A couple of days later, my daughter sent me two pages from the slave census from the 1860 US Census in Ozark, Alabama. We read over it together, several times, making sure we could translate the florid handwriting, and then trying to understand what the numbers meant.

The first of the two pages is up above here.  The last name on the right is our concern. The name is Moses Matthews, the patriarch of the Matthews family, my great-great-grandfather. Now the two pages give a total of 20 slave owners, with 145 slaves. For these 145 slaves there are 24 houses: most owners have one house each with  2 to 10 slaves per house. Fifteen slaves are identified as mulattos. Five owners are identified as Matthews.

Moses Matthews has the most slaves on the two pages: he has 24 slaves in three houses, though another ancestor, Dempsey Dowling, has 20 in three houses.. Three of the Matthews slaves are identified as mulattos.  One is a man older than he, but the other two are twin boys, four years old.It is what I think Mr. Matthews meant by "we is probably related."   I have no documents that can prove anything, but I see these small twins in the shadows behind Mr. Matthews, and I can imagine that his own family had a story about them.

NOTE: Google no longer permits editing of the blog format.  So I am unable to correct the address of my web site which is now NAUPLION.ORG. I would like to remove the blurbs for other blogs from the side. I do not know how well this is going to work after a 5-year absence.