The Rev. Hartley views the Morea 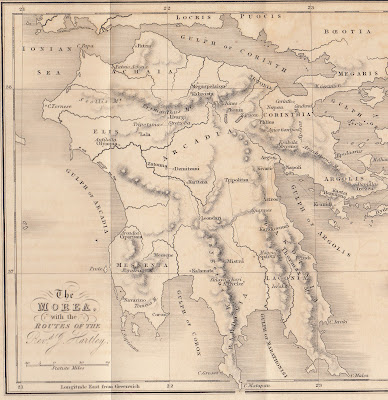 From Researches in Greece & the Levant by the Rev. John Hartley, M.A., 1833.
The Rev. Hartley's route in 1828 from Napoli to Kakovouni, then Napoli to
Tripolitza, Mistra, Leondari, Karitena, Demitzani, Megaspelaion, and back
to Napoli are shown by a very pale dotted line.

From the Rev. John Hartley, English missionary to Greece and Asia Minor.

NAPOLI DI ROMANIA
March 29, 1828 – for the second time, I find myself in this celebrated fortress. We sailed from the Port of Kranidi at eight o'clock, and in six hours arrived here.
March 30 – I have distributed several copies of Lord Lyttleton on St. Paul, and of Bishop Porteus's Evidences – books which I find of great value in the present crisis.
March 31 – Since I was in Napoli, our Agent has sold all the Scriptures with which he was entrusted: viz. 30 small Testaments, 17 large, and one Hellenic; and he has paid me, deducting the per-centage, 124 piastres, 30 paras. I hope soon to send him a much larger supply. Visited with much pleasure the Lancasterian School: it has 170 scholars, and is in excellent order: many Boys repeated, at length, passages of Scripture History. . . . Valled on N. Skuphas and conversed with his sisters. They shewed me the “Pilgrim's Progress” . . . which their father had sent them from Smyrna.
April 1 – I presented a supply of books, for the School of Demitzani, to Niketas Kallas, one of the Managing Committee; and others for the Lancasterian School in Napoli.

I extract from a former Journal the following Narrative:


Oct. 17, 1827 – I have been highly interested by a visit, which we have just paid to Griva, Commandant of the Palamidi. This Chief, after having held possession of that important fortress for more than a year, found himself unwilling to give it up; and, impelled by his vindictive feelings, actually wged war on his countrymen. About two months ago he commenced firing on the lower castle and on the town, and even proceeded to throw bombs. No less than one hundred and fifty persons became the victims of this outrage.

On reaching the summit of the remendous rock on which the fortress is built, I was surprised to find Griva himself, waiting to receive us. He is a fine-looking young man; and, apparelled as he was in a magnificent Albanian dress, he presented such a noble and warlike figure as I had never before seen. After receiving us with a friendly Greek welcome, he introduced us to his quarters; where his wife, a young lady of elegant appearance, arrayed in a handsome Turkish costume, exhibited herself for a few moments, and then suddenly disappeared; -- this Mussulman retirement of females still existing among some of the Greek Clans. With Griva we had much conversation. I told him, as I do many others, the history of the Bible Society; and left with him, for the use of the Garrison, two copies of the New Testament. Judge of our surprise at his answer: --”they are a good thing for those who can read: but I do not know how to read.” . . . I was thunder-struck, to fina a man, so prince-like in demeanor, and Commandant of the famous fortress of Palamidi, making such a discovery. He expressed, however, his regret --”His father had never profided such an advantage for him.” Our conversation turned chiefly on the politics of the day: he threw out hints, which he evidently meant as a justification of his recent conduct: “Men,” he said, “who possess no merit, who have never fought for their country, are preferred to offices of importance; while those who have distinguished themselves to the utmost are passed by with disregard.” He also intimated, that he waiting the coming of Count Capo d”Istria, in order to give up the fortress to him.

After accompanying us, with one of his brothers, to the various works of the fortification, he introduced us to another brother, who was laid up with sickness. They described to us the warlike habits of the family. They told us that they never lived on the three articles of bread, meat, and win together: if they had bread, they had no meat: if they had meat, they had no bread. For months in succession, they never changed their dress: they were accustomed to heat, cold, rains, and snows-- to wade rivers up to the neck – and to encounter many other appalling hardships. If they were tow months without an expedition, they grew sick. They had never paid tribute to the Grand Signor: -- when they could not find Turks to fight, they attacked their own countrymen!