Creatures of the Cretan Seas 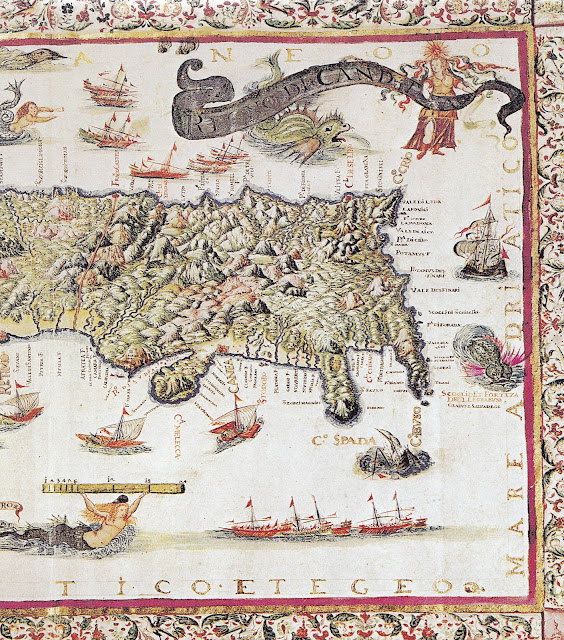 Francesco Basilicata worked for the Venetian regno of Crete between 1626 and 1645.  During that time he produced forty-some detailed and elegant maps of fortifications and cities.   Early on in his service in Crete, he helped design and construct the memorable Morosini fountain in Candia/Heraklion.  The three pictures below gives hints of the work to come on the map, particularly in the third. 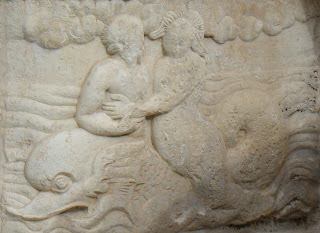 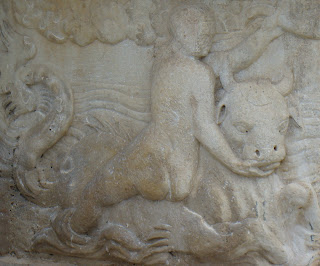 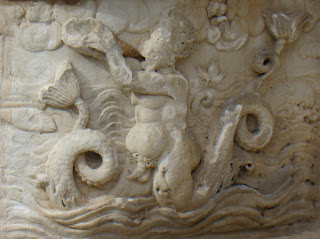 His triumph was this exuberant map of the whole island, a (upside-down, western) section of which you see above.  The map (I cannot find the dimensions) is used for the end-papers of the book cited at the end of this blog -- a beautifully-produced book of the history and historic images of Chandax, the Byzantine version of the Andalusian-Arab name for Heraklion.

As you can observe above, Crete is a luxuriant and cheerful island in itself, but the rest of this blog will rejoice in the creatures of the Cretan waters.

(The pictures should enlarge when clicked on: a couple should expand to show more.) 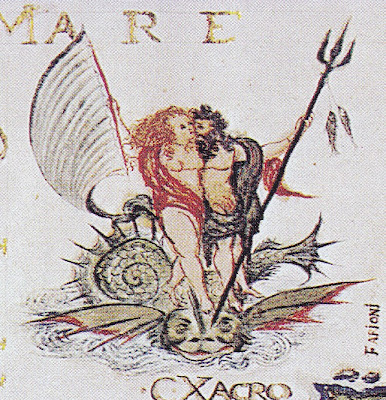 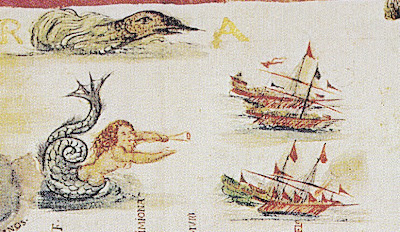 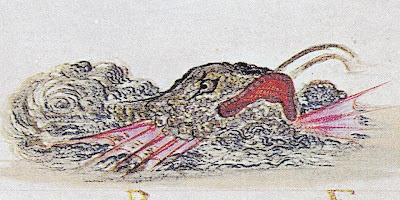 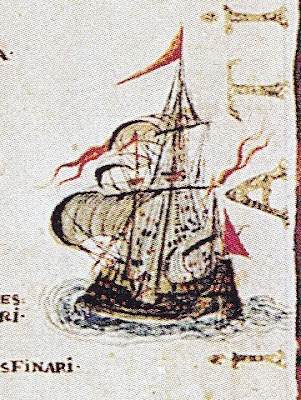 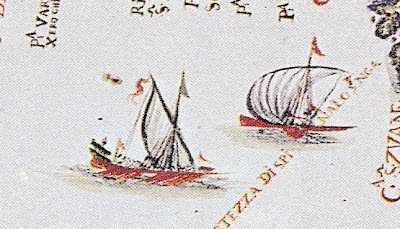 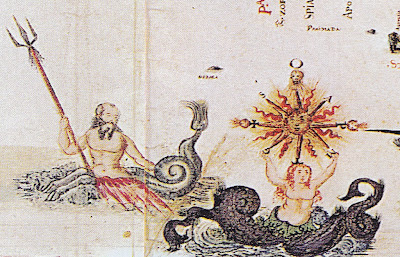 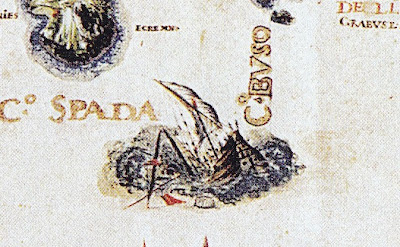 The pictures are from:

The Second Gate, revisited, and another

Two years ago I wrote about the second gate to Acro-Nauplion, a blocked-up gate constructed in the Venetian style of around 1700.  After reading that entry, a correspondent telephoned an archaeologist working in the Nauplion museum, and asked her about the gate.  She was told that the Venetians had blocked up the gate in 1470 or so as defense against Ottoman cannon.

So I would ask, where would you locate your cannon so as to do damage against a gate high up on a vertical cliff, where I have drawn that black loop on an aerial Google photograph? You can dimly work out the edge of the cliff curving up from the left of the picture, then down past the middle and back up, as contrasted with the roofs below.  Because of the slope of the hill, there is no place to aim from below, and no facing position from the walls on Acro-Nauplion.  If the Ottomans had got cannon far into Nauplion to find an angle on the gate, the city would have been securely in their hands anyway.

I do not recall mention of use of cannon in the Morea by the Ottomans during that 1463-1478 war, though there probably was some.  A chronicle notes the 1479 Venetian removal of their "artelarie" from Mantinea, Damala, Astros, and several other fortresses when word of the peace settlement reached the Morea.  The one account of an Ottoman assault on Nauplion -- in 1463 -- was by horse and foot.

This is the earliest known image of the gate, or of Nauplion, the Camoccio image from 1571, which I used before.  The gate is to the left and slightly above the central round tower.  The image gives no idea of the heights of Acro-Nauplion, or of the vertical distance. 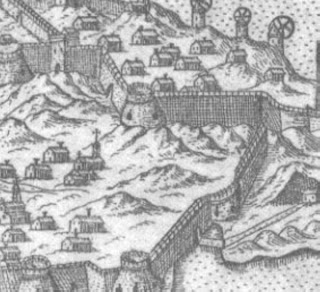 Two more images, the first a Dutch image based on Camoccio. 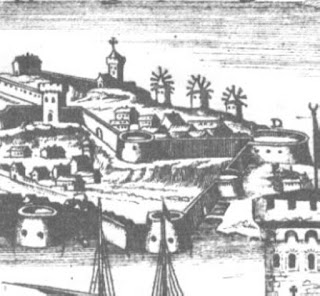 The second image has a another source in addition to Camoccio.  It gives a good impression of the heights and the cliff, and, more important, indicates the long stairway going up to the gate. 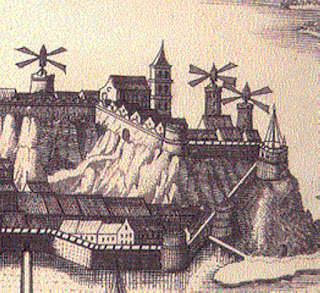 In this photograph looking down at the gate -- an indistinctly arched area with a white stone on tip -- from nearly the only position on Acro-Nauplion from which you can take a picture, you can see that a staircase would have been essential. 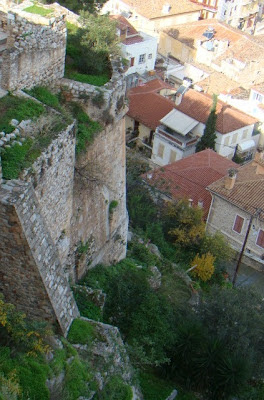 We have documentary confirmation of the gate's being in use in 1531.  Vittorio Diedo, who was baylus et capitaneus Neapolis Romaniae from 27 November 1529 to 26 November 1531 reported that he had a contestabile with three fanti guarding the gate.  It needed guarding, he said, because the old sea walls (built by Bartolomeo Minio in 1480-82) were in such bad condition  that Turks could land at the end of the walls on the shore of the Grotto and come in.

Diedo also notes that the port is so silted in that it is more convenient for ships to come to the gate to the Grotto.  This is what that gate area looks like now -- it isn't at all helpful for reconstructing what the area might have looked like in 1531. You enter the gate in the trees at the upper right, and come down stone stairs to the landing area.  It is a long walk to the actual grotto. 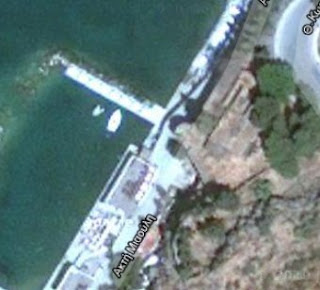 The gate is shown in all three of the drawings above.  The gate leads to some kind of landing area by means of a bridge over a sort of moat. Diedo didn't have a moat: he recommended one, and a moat was dug.

The Grotto is known as Panagitsa now, a pretty site with a chapel over a cave almost at the end of the prow of the rock of Nauplion, and a favorite place for wedding photographs.  It was a minute convent in the 1500s, S. Maria de Grotta or de Gratia, and in the period of the second Venetian occupation, it was Nauplion's lazaretto.  (In the first occupation, the lazaretto was outside the pair of walls on the land side, as you can see from the church of S. Lazaro at the far left of the Camoccio map.) The lazaretto at this end of Nauplion again suggests ship access at least to the end of the city walls. 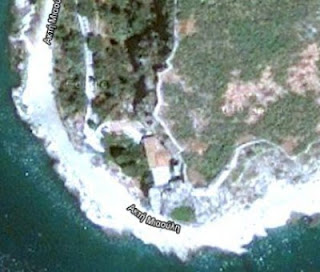 This is a view of Panagitsa from above.  The glaring white footpath was made by blasting the hill-slope with explosives and the rocks from the demolition were dumped into the water below.  The configuration of the hillside, and the waterside approach has been completely changed since WW2, so it is very difficult to envision an approach for ships anywhere alongside.  That there was a possible approach even from this end is confirmed by the fact that around 1700 Morosini had a gate cut in the very end of the Acro-Nauplion wall -- the U that you see with the wall -- and steps cut down the rock face to a landing.  Those steps are lost now, to explosives and prickly pear, and where I could just glimpse the gate in 1979, from the inside, the prickly pear has taken over.  I cannot think it would ever have been a recommended place to anchor -- the water there is always rough -- but it might have been better than nothing in a siege.

I would like to think that the archaeological people at least made good photographs before the explosives were used.  They do need to think about that second gate.

LATE NOTE:  I find on several maps from the Morosini period a representation of steps down the hillside to the area of S. Maria of the Grotto.  Perhaps a reader knows about these -- if you are going to Nauplion, be careful of the prickly pear up there.

LATER NOTE:  I find another map of Nauplion, after 1700, on which this staircase is shown.  Letter K is labeled "la porta secreta." 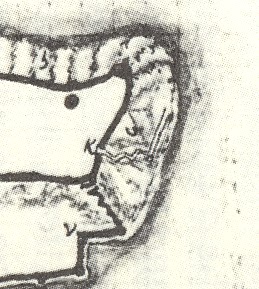 Posted by Nauplion at 7:37 AM No comments: