Cyriaco and the Little Metropolis 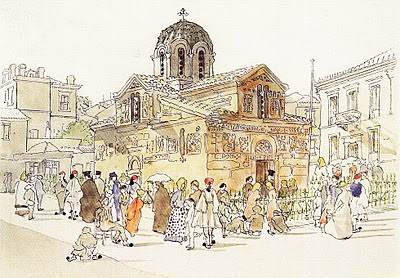 Watercolor of the Little Metropolis by Mary Hogarth, ca. 1910.

When I was first in Athens in 1977, I was given to understand that the Little Metropolis was dated to the 11th century. I have seen that date floated back to the 9th and forward to the 13th, and find that the 12th is preferred on Google.  I didn't mind this at all.  I was, and have been, enchanted by its exuberance and utter charm.  In fact, it was the first "Byzantine" church I ever saw, and for the next year, until I went to Thessaloniki, other Byzantine churches were a great disappointment.

However, a graceful work of scholarship a few years ago by Bente Kiilerich (below) shows definitively that it had to have been built after Cyriaco of Ancona visited Athens in 1436.  The reasoning works like this:  Cyriaco collected inscriptions.  These inscriptions were mapped and numbered by Edward Bodnar.  The Metropolis, and Cyriaco #36 which is built into the Metropolis to the right, are marked on Bodnar's map.  (click to enlarge) 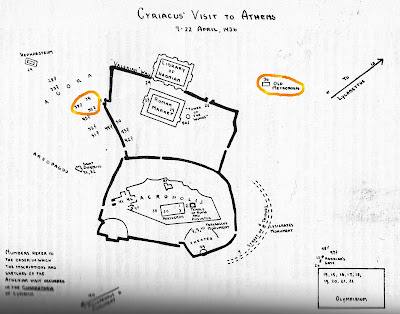 But Cyriaco's #34, #35, and #37 are on the left, just inside the modern entrance to the Agora and near those large statues of men with snakes' tails. 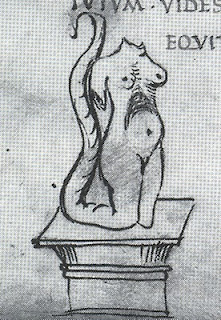 Drawing by Cyriaco of statue in Agora

Kiilerich reasoned that Cyriaco would not have interrupted his notes to go across Athens for one inscription, and then go back to take up where he had left off.  And if he had, he certainly would have noted other inscriptions on the church, easier to spot and more interesting.  Thus, the inscription mapped to the Metropolis must have been in the Agora when Cyriaco saw it.

It is not an exciting inscription and even Kiilerich had trouble photographing it: 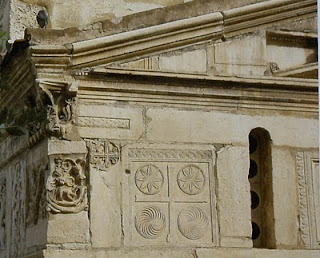 So this charming lace-covered chapel was built after 1436.  Kiilerich would have it built after the Ottoman take-over in 1456, but I find that unlikely.  I have posted here twice about Florentine houses in Athens, and given images of Florentine houses on the Acropolis, and of one built into the Lantern of Lysicrates.

Mid-century Florence was enthralled with graceful ornamentation -- think Alberti's architecture, Donatello's Cantoria, Fra Angelico.  Florence was also enthralled with things Greek, and Athenian.  Two of the wealthiest Florentine merchants and collectors of art and Greek manuscripts -- Palla Strozzi and Piero de Medici -- bankrolled Cyriaco. This building of the Little Metropolis has a completely different attitude from "Byzantine" churches with spolia.  In them, spolia seems, for the most part, very specifically placed -- look at the other spoliated Byzantine churches in the Plaka area.  For this building, spolia is the whole purpose of its existence. 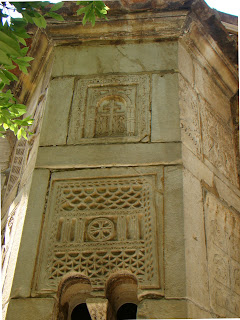 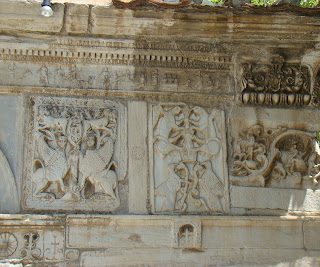 Olga Palagia (below) has already suggested, en passant, a Florentine origin for the construction, and I hope she will go further with this.  I would add the suggestion that it was built as a private chapel by a wealthy Florentine merchant-collector.  Cyriaco gives us much evidence for Italians in the islands putting up spolia on the walls of their buildings, though almost nothing they were finding was up to the quality of most of the pieces here. (I note, on the map above, that the Little Metropolis and below it, on the semi-circle, the Lantern of Lysicrates to which a Florentine house was attached, were both outside the old city walls, and so possibly in areas with space for surrounding grounds.) 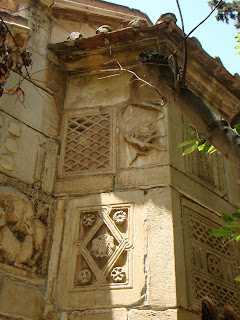 This is work for another scholar, and I hope someone looking for a dissertation topic will take up the question of Florentine Athens and what remnants may be still recoverable. 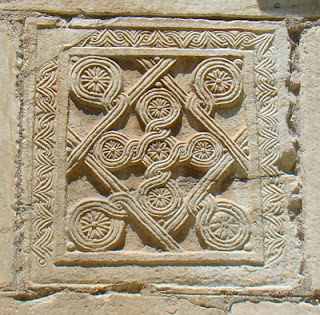 Olga Palagia. "The date and iconography of the calendar frieze on the Little Metropolis, Athens," Jahrbuch des Deutschen Archäologischen Instituts 123 (2008) 215-237  Download at .http://uoa.academia.edu/OlgaPalagia/Papers