What Happened to the Parthenon's Stud Farm 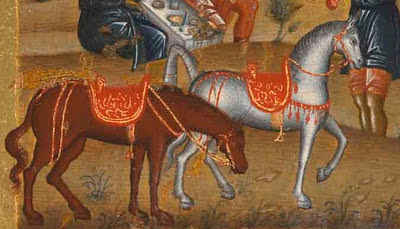 What happened to the stud farm is a good question.  Most of this will come from work by Julian Chrysostomides* who transcribed mounds of documents from the Acciaiuoli period.**

Nerio Acciaiuoli, Lord of Corinth (acquired in 1371 as security for a loan) and first Florentine Duke of Athens (a new title that year) died on 25 September 1394.  Two months earlier a visitor had noted that he was aged and unwell. A few days before he died, "sano de la mente ben che infermo del chorpo," he had made his will which begins with the request that he be buried in Santa Maria de Setines, the Atheniotissa or Christian Parthenon.  We don't know if that request was fulfilled.

In the second section of his will he leaves the city of Athens to Santa Maria de Setines. The silver, gold and jewels Accaiaiuoli had earlier removed for his ransom have been mentioned before: he asks that the silver be restored to the door, and that all the other furnishings, gold, silver, jewels and precious stones be bought back and restored to the church.  I wrote earlier that we didn't know how that worked out: I still don't.

Nerio asked that twenty canons say masses night and day for his soul (which he probably needed), and that these be provided for out of the intrade, the income, from Athens. The intrade was also to pay for repairs to the cathedral.  All this was to be handled by his executors, who were to be backed up by the Signoria of Venice.

He left a rouncey to each man in his employ, and gave the Bishop of Argos the horse of his choice.  Otherwise, he left all the çumente, his spelling of jumenta -- horses -- in his stables to the church in Athens.  This would be the famous stud farm, and in the contemporary world, "stud farm" implies race horses.  But in my understanding of medieval terms, jumenta were animals that could carry weight -- war and pack horses.  That understood, he certainly had a very large stud farm, or farms: one witness recalled seeing a herd of fifty 3-year olds at Vasilicata, on the coast west of Corinth.  Three horses in the Acciauoli stable, corserii -- war horses, were valued at 300 ducats apiece.

Carlo Tocco, Duke of Kefalonia, was married to Nerio's daughter Francesca. Theodoros Palaiologos, Despot of Mistra, was married to Nerio's other daughter Bartolomea.  Each considered himself the rightful heir to Corinth and all that was Nerio's, quite apart from Nerio's own opinion.  There ensued a great tangle of events, bad behavior, falsified documents, disguises, the participation of the Navarrese and Evrenos Bey, war around Corinth, and intimidation of the executors. Chrysostomides explains it all as clearly as anyone can.*

Tocco won, for a while, although in less than a year he was reduced to selling Corinth to Theodoros who had occupied the territory with Turkish help. (And two years later, in 1397, Theodoros offered Corinth for sale to the Hospitallers.) But while Tocco still considered himself a winner, one of the first things he did was to send twenty of the best horses as a gift to Beyazid, who was going to war in Wallachia.

Financing this required selling and pawning a considerable amount of jewels and silver from Corinth. (The Venetians reported that everyone who sat at table with Francesca ate and drank out of silver vessels, and after Tocco got there, they didn't.)  The twenty were to be taken by his brother, Leonardo, to whom he gave the largest and most valuable courser, a grey. He also gave a horse to the person he sent to take over Francesca's castle of Megara, and other horses to assorted people who had come with him from Cefalonia.

Then he packed up Francesca, the jewels, pearls, silk cushions, wall hangings, furniture, curtains, beds, mattresses, and a great many horses and palfreys and sent them ahead of him to Cefalonia.  Nerio had made Francesca his heir to Corinth: he was quite capable of mentioning Tocco had that been his intent.  In fact, it looks as if he wanted neither of his sons-in-law involved.  Nothing is reported of Francesca's opinions, but it is clear from the statements of various participants that there was a great deal of personal loyalty to her and none at all to Tocco.

As best I can understand, the Greeks of Athens did not like the idea of belonging to a Latin cathedral, and asked for Ottoman help.  In the summer of 1395, a small Turkish force took over Athens.  One of Nerio's executors, the castellan Matteo de Montona, sent to Negroponte for Venetian help, in accordance with the will.  The bailo there, Andrea Bembo, sent down enough soldiers to drive the Turks out.  A Venetian administration was sent out from Venice, which decided that since so many horses had disappeared from the stables, there was not enough income to support twenty canons, and so the twenty were reduced to eight.

At the time of Nerio's death, his son Antonio was Lord of Thebes.  Nerio had, as one witness said, kept Antonio "on a very short leash."  So quite a few people were surprised when, in 1402, having observed that there was a very small Venetian force to defend Athens, Antonio took over Attica and all of Athens except the Acropolis.  After seventeen months, the Venetians surrendered from hunger.  Except for an interval of four years, Antonio was Duke of Athens until 1451.  Early on, because of Turkish raids, he moved the stables to Negroponte, good relations with the Venetians having been restored.

So that is, more or less, what is known about what happened to the Parthenon's stud farm. Other provisions of the testament will be considered in another entry, but given all the fassaria, I am skeptical as to how much Corinth, Argos and Nauplion actually received from what they were bequeathed.