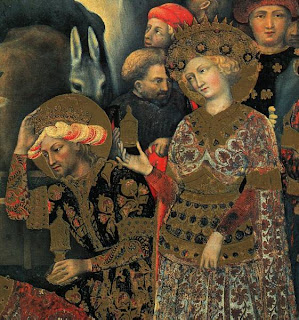 An earlier Western conception of the toupha has turned up, this time in the Adoration of the Magi by Gentile da Fabriano, a Florentine painter, thirty-five years before the Benozzo Gozzoli  Procession of the Magi, also in Florence.  I had blithely assumed that Gozzoli had created this toupha: 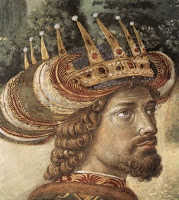 Gozzoli painted his Magi in 1459-60, and I had been pleased with the discovery that not only was his painting based on the visit of John VIII Palaiologos to Florence in 1438, but that this toupha uses the red, gold, green, and white colors of the Medici who commissioned it. (The Medici were sponsors of a religious organization that specifically honored the Magi.)

However, Gentile da Fabriano painted his Magi in 1422-23 and the toupha may have been his design.  Here the toupha has red and gilded feathers, the Strozzi colors of red and yellow, and this painting was commissioned by Palla Strozzi. 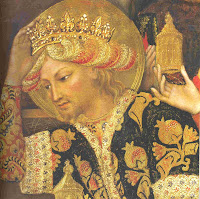 Gentile paints the the Magi three times as they process into the realm of magic and off the edge of this world, and each time one of them is wearing the gold and red feather toupha: 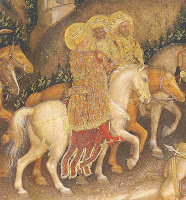 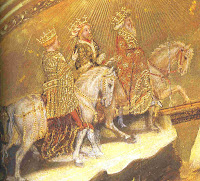 (click to enlarge)
There are other elements to notice.  The forked beard, for one, which is very common in Western portrayals of John.  The short-sleeved outer garment, typically Byzantine.  And that this toupha-wearing king is the second king in the line to adore the Infant.

Now back to the Gozzoli.  He, too, is a second king.  The beard hints at a fork, although not obviously.  And he is wearing that short-sleeved outer garment. (Do notice the luxurious fabrics and colors both are wearing.) 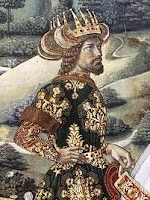 But: Gentile da Fabriano signed and dated his altarpiece in May 1423.

And the beard turns out not to be diagnostic.  Other painters of the period have a second king with a forked beard, or a king with the short outer sleeves, though I have not identified any more combinations of forked beards and short sleeves.  The forked beard seems to be an attribute of  "a king from somewhere exotic."  So do the sleeves.

Moving on to the animals, Gozzoli gave his magi cheetahs and a lynx.  Gentile includes a cheetah and a leopard, on the rumps of their keepers' horses, and hunting. 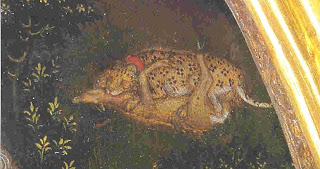 Clearly, Gozzoli drew heavily from Gentile's work and these quotations must have given a great sense of security to his viewers who were looking at a very different style of painting. Surely some art historian has tidily explained this, and the business about the two Second Kings, and some reader can send me the relevant references -- which I have not found although I have looked for them.

This is the great pleasure of research: there is always something else out there you haven't seen yet.  It is not a matter of "Gotcha!"  It is the joy of the exploration that leads from Cyriaco's ridiculous sketch to Gentile's shimmering gold.  It is the  matter of the journey, riding with the Magi, following the shining track, discovering the unlimited abundance just over the next hill.