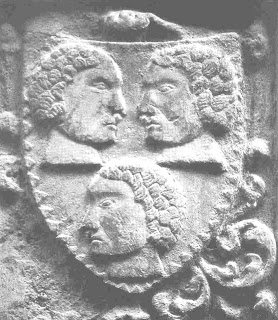 
The year of 1429, may have been the most difficult year in Cleofe Malatesta's life.  The past eight years had been difficult enough, but in 1429 loss piled on loss.
In February or March of the previous year, she had given birth to a daughter, Helena, named for her husband's mother, the Empress Helena.  It is Greek tradition to name the first son and daughter after the husband's parents.  Shortly after, she wrote her sister Paola a letter that may be the earliest written description we have of postnatal depression.  She is barely able to mention the baby.
During 1429, her brothers-in-law, Constantine and Thomas, were besieging Patras, the city her brother Pandolfo ruled as Archbishop. Pandolfo went to Venice to ask for military aid, but Venice said it would conflict with their agreements.  Pandolfo was on his way back to Patras when he learned of the surrender.  Sphrantzes met with him at Naupaktos to find out his intentions.
Meanwhile, all that year, Cleofe's husband, Theodoros II, was dithering about whether he should go into a monastery -- was the fact of becoming a father (and discovering the wonders of sex) too much for him to assimilate?  Whatever the cause, it became clear in 1429, and again in 1436, that he was unable to give up control of Mistra to Constantine although he did hand over a great deal of territory to him.
Pandolfo had been made a cleric early. He had a hunched back and dragged his foot when he walked -- a birth injury? -- and could not join the Malatesta tradition of warriors, but he joined their tradition of humanists, and he could represent the family's interests in the church.  In 1424 he had been given the archbishopric of Patras which, since the Frankish conquest of 1205, had been a fief of the church.  There, he rebuilt the cathedral of S. Andrea -- the Malatesti all went in for building -- and the Malatesta court composer, Guillaume Dufay, wrote an elegant short motet for the dedication: Apostolo glorioso. Pandolfo put up an inscription.


Coat-of-arms of Pandolfo Malatesta, Metropolitan of Patras, for the rebuilding of this church, 1426.
Given that his father, Malatesta "dei Sonetti" Malatesti, lord of Pesaro, had given new portals for the churches of S. Dominico and S. Agostino in Pesaro, we can speculate that one or more of the builders and stonecutters were sent over to work in Patras.  S. Andrea of Patras housed the relic of the head of Saint Andrew and much later, when Cleofe's brother-in-law Thomas had to escape to the West at the Ottoman takeover, he brought the relic as a gift for the pope.  But we know almost nothing of Pandolfo at Patras, except that when he had to leave, Cleofe lost an important contact with her family, and a source of comfort. 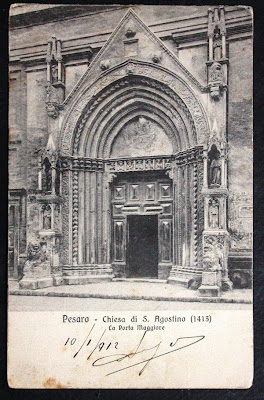 Portal of S. Agostino given by Malatesta "dei Sonetti"
In August 1429, Cleofe's sister Taddeo died of the plague. Plague was no respecter of class, and a few years later her brothers-in-law's wives, Maria of Trebizond, and Zoe Paraspondylos, died of plague in Constantinople.  Then in November 1429,  Theodora, wife of Constantine, died.  There is no information as to whether they had actually met, but it does appear that Theodora was traveling from Clarenza to Mistra to finish out her pregancy there when something happened on the way, and she and her infant died.


Then at the end of December, Battista wrote Cleofe a letter she likely would not have received for a month or more.  That letter has not survived, but the one she wrote Cleofe's sister has, and the letters must have been very much alike. This is a rough, partial, translation:


Dearest sister, . . . You should be told of the very sad news, of the transition of our magnificent and most virtuous father into memory.  I thought I ought to tell you what happened. . . he had no pain or physical suffering. . . Thursday night he had a bad cough that settled with treatment . . . Sunday night when we left him, he was in good spirits.  Monday morning he went to Mass as usual . . . he said grace at dinner and then talked a while with Maestro Mateo, he started to eat but took only a little bread and drank a very little . . . then he touched his remaining eye and said, "I don't know what is wrong with this eye."  Mateo asked him what he had said.  He didn't answer, then he said, "Virgin Mary, help me!" and remained with his eye closed . . . [Later] his face darkened, and we had him given Extreme Unction, then there were three great breaths . . .he moved a little . . . then in about an hour it seemed to us this blessed soul had left his body. 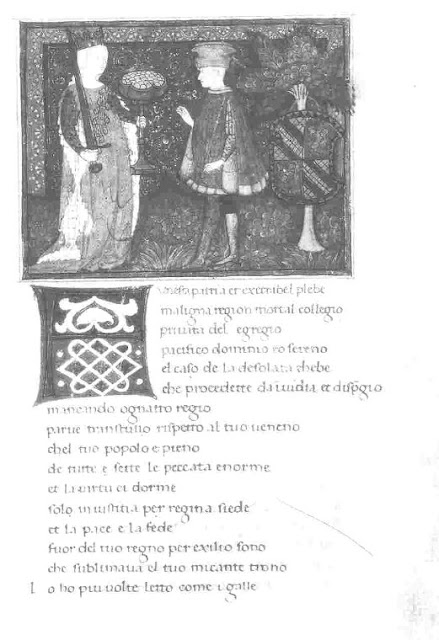 Cleofe's father was Malatesta "dei Sonetti" Malatesti, widely known for his poetry, as had been his father who was a friend of Petrarch.  He was not, I'm afraid, anywhere near that standard, though he did try to rewrite the last canto of Dante's Paradisio. He was first of all a condottiero. Some fifty-six or so of his poems have survived, mostly about the Church and the Great Schism and the King of Rome.  He hired Guillaume Dufay as court musician and had his children educated in Latin and Greek.
Dufay wrote a motet for Cleofe's wedding, Vasilissa ergo gaude, and he wrote one for her brother Carlo's wedding, Resvellies vous.  The family was rich in music and books and loyalty, and when Carlo inherited the lordship of Pesaro when Malatesta "dei Sonetti" died, he shared it with his brothers, Pandolfo and Galeazzo (who was married to Battista).  After this, the family story becomes too complicated, but I conclude with the closest thing available to a portrait of Cleofe, in one of Carlo. 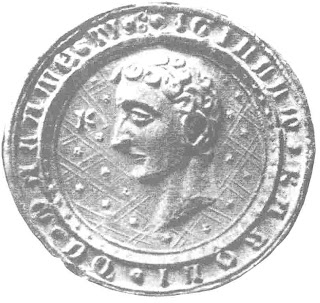