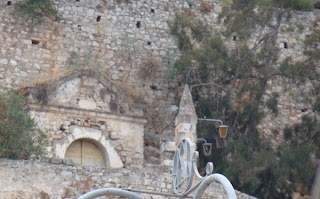 By 1713, the Venetians were ready to demonstrate that they were an empire with staying force (they had conquered Nauplion in 1686), and for the first and only time in Greece -- Crete is a different matter -- they built statements of imperialism. So it was a shame that when the Ottoman army and fleet arrived in 1715, Nauplion had a garrison of about 80 soldiers to face 100,000. But for two years, they thought big.


The Venetian engineers reshaped the main plateia by constructing a massive armory as far to the west as possible, but they needed to leave room for an street connecting the harbor to the new approach they were constructing on Acro-Nauplion (first picture). The width of the street was not grand, as it was constrained by the conventual buildings around the 15th-century church of the Franciscans.  The church is still there, much transformed, known as the Panagia. 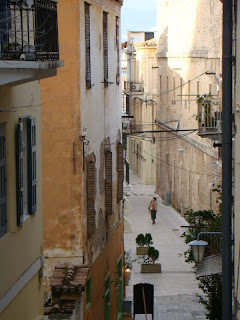 Past the armory (rear view here), the street widened a bit going uphill, and it is probable -- documents have not survived -- that they put in actual cut stone steps.  They did so farther up. Here and there along the steps, you can spot something left from that period, such as this bare hint of a Venetian arch at the entrance to a garden. 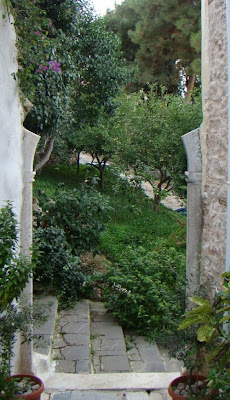 This garden looks onto an open area in front of the Hotel Leto which the 1713 Venetians must have intended to make into an Italian piazza. There are still remnants around the area, much rebuilt, of Venetian houses with arched doors, and parts of walls. What is particularly interesting, to the left, going away from the Leto, The Venetians built a stone stair to the street above on the hill. At the entrance to the stair, you can spot on either side the remains of stone-cut jambs that once held a heavy gate.  A future blog will discuss where these stairs were going. 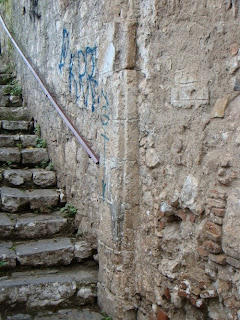 For now, there is a sharp right behind the Leto, a dismal flight of crumbling stone stairs, apparently untouched since 1713, and then the stairs reverse to go up to the gate shown in the first picture.  Despite the hundreds of thousands of tourists that come to Nauplion annually, the stairs are almost untouched.  There are two pillars, one on either side, at the top of the stairs, with Venetian stonework typical of the late 17th-early 18th century. The pillars are significant because important visitors arriving in Venice passed between two columns on the waterfront, and once upon a time they passed between two pillars to enter the official south-west entrance of San Marco. 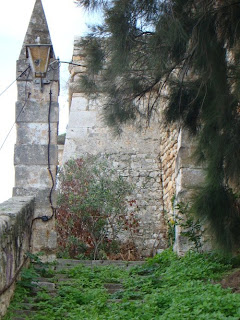 Then you come face to face with the great gate. 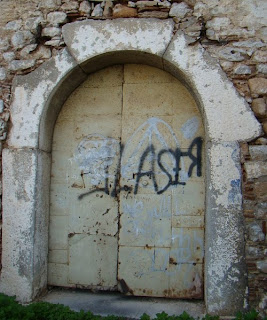 It has been locked and barred since 1977 or early 1978.  Once the Greek government got into the hotel business and devastated a the west end of Acro-Nauplion to build its pompous luxury hotel, the hotel management and guests did not want random people turning up in their garden.  The excuse was made that the staircase was dangerous, and the gate was closed.  It was dangerous, true.  Inside the gate another stone stair goes up to the right through an arched passage, and  more than once when I went up in 1977 small bits of stone fell, and the steps were clearly employed as an emergency toilet.

This staircase, though, is a spectacular construction, and it does no good in 2010 to make noises about preserving the national heritage, suffering as the Archeological Service is from brutal budget cuts.  But it would be a splendid restoration project for a donor seeking kleos, and at the very least, cleaning the growth off the stairs would be an admirable project for a youth group.  There are at least three Nauplion groups on Facebook now, probably more, posting the occasional photo and telling one another how much they love Nauplion.  Some of them could clean up the stairwells and repaint the gate over the weekend. 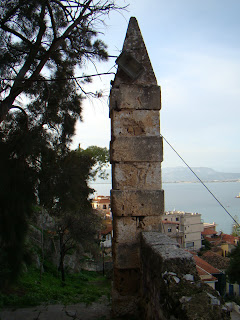