Large Spotted Cats
In working on the entries for the Leopard Wranglers, I read five different books on Gozzoli and the frescos in the Medici Chapel. Not one of the authors in those books -- all art historians and so presumably trained to look at details -- managed to make the distinction between leopards and cheetahs that Gozzoli did in the frescos, although one did use a shotgun-technique of referring arbitrarily to "leopards," "cheetahs," and "hunting leopards." [Late note: Joan Lloyd in African Animals in Renaissance Literature and Art makes the distinction.] Gozzoli paints both cats together here. 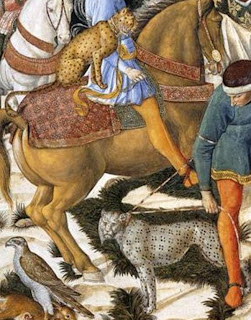 The cheetah -- the hunting leopard -- is on the horse.  The leopard is on the ground.  Cheetah spots are single, like thumb-prints.  Leopard spots come in clusters, as if printed by your fingertips bunched together.   Gozzoli makes the animals different colors, though they are actually about the same, and shows clusters of four spots for the leopard: it is much more likely to be five. The spot distinction is really all one needs for the cheetah-leopard issue.  If you bring in other species of spotted cats, which we will not do here, you may need more help.  If you are concerned with hunting any of them them, you have no business here at all. The medievals did not help the distinction by calling cheetahs "hunting leopards," except that it indicated that they were well-aware that there was a distinction. For them, the essential difference was that cheetahs are easily trained to hunt with humans.  They are magnificent fast animals, perfectly designed for Art Deco imagery, with exaggeratedly small heads and large haunches. A leopard of the same body length as a cheetah is, but with a larger, proportionately broader skull.  They are over all heavier, bulkier, and highly resistant to training. They are killers, tracking and pouncing over comparatively short distances, but they are not good over long distances.  Leopards were collected for their beauty and exotic qualities, along with lions, ostriches, and cheetahs -- and that is why two of them are shown in the Medici frescos -- but serious hunters wanted the cheetahs. The painters, frankly, did not pay much attention to the head and skeletal distinctions between the animals, but they were very clear about the spots. In the entry (link above) I wrote about Nick Nicholas' exhaustive article on the topic of nomenclature.  Knowing the differences between the names and animals is not a major life skill necessary for most people: knowing that there are differences and how to look for them is. [Late note: that may not be a leopard.  Please read the comments at the end of this.] 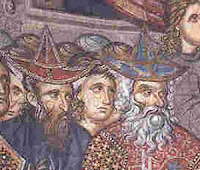 Hats
I have read too many comments this year identifying the imperial Palaiologan hat as a skiadion, a shade-hat. Interestingly, it is almost impossible to find a contemporary Greek representation.  The only one I know, I have used here before, but it has nice detail.
Pseudo-Kodinos, who told us about the Leopard-Wranglers, has a lot of entries on the skiadion. "The skiadion of the despot is entirely covered with pearls, on his aer (see the tails on Manuel's hat below) is his name in gold embroidery. . . . If [the despot is a young boy] he is on horseback, he wears the skiadion. When he becomes an adolescent, he wears the skiadion in the palace. . . the skiadia of the relatives of the emperor, who are despots, are red and gold, embroidered with gold thread, and have a cross embroidered with pearls. . . The skiadion of the sebastokrator is red and gold, embroidered with gold thread.  His aer is like that of the despot."   Headgear is not enough to distinguish rank at the Palaiologan court.  You need the full description of robes and colors, embroidery on robes, and colors of shoes to have any sense of security, but it does let you know that however poor the empire had become, there was full employment for the gold-embroiderers. The skiadion has been repurposed in the witch hat.

Update: one of my most faithful readers sent me another late 15th C image of skiadia, from the Istituto Ellenico in Venice. Emperors might have worn the skiadion in private, but in public performance -- at least in the West because that is where the images come from -- they wore the kamelaukion.  I don't know if the name refers to a camel's hump.  It is rounded and sectioned, rather like a melon, and is sometimes called a melon hat.  John's had jewels on top that could be changed.  To my knowledge, there is no Byzantine image of an Emperor in a kamelaukion, but the Westerners loved it and made images of Manuel II, John VIII, and Thomas Palaiologos.  This is Manuel, more or less -- his beard was white -- from the Tres Riches Heures of the Duc du Berry. 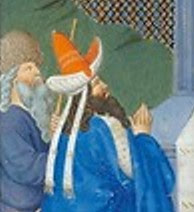 John's hats are more familiar, and he was more concerned about his personal style. 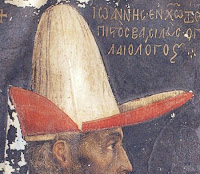 It is difficult to get good photographs of images of Thomas, but he is shown here from the tomb of Pius II who made a feeble effort to make him Emperor: 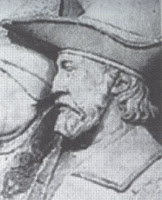 Western artists, when not painting visiting Palaiologoi, used the kamelaukion to represent "exotic person from Eastern country where they have better hats than us." 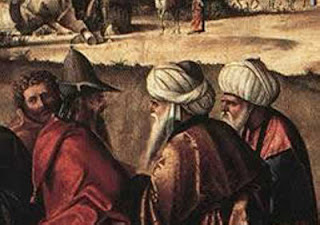 There is only one Byzantine representation of a kamelaukion that I have been able to find, and I have given it an entry of its own, the portrait of Manuel Laskaris Chatzikis at Mistra.  There are, I think, exceptional reasons for this portrait, but you will have to read about them there. 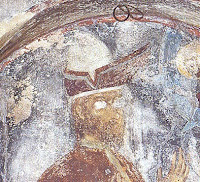 Further update: the same reader found a miniature image of kamelaukia in the 14th-C manuscript of the Tale of Alexander in the Istituto Ellenico of Venice.  Here, even though by a Greek artist, they are used to identify exotic foreigners.  So it may not indicate Palaiologan use.
Posted by Nauplion at 5:00 PM