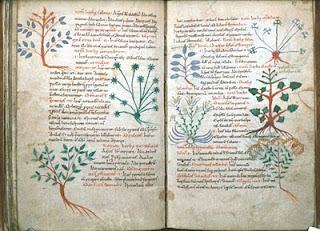 I wrote here earlier about Dr. Pepagomenos' treatment for gout, and I also wrote up what is known about him, including the fact that he attended Cleofe Malatesta Palaiologina in childbirth and was one of the speakers at her memorial service.  I recently came across a small Italian publication of his notes on medicine, a collection of mostly short paragraphs on drug treatments for specific conditions.

Some of these are copied from Dioscorides, or Galen, or Paul of Aigina, and some appear to be notes he collected from informants.  The first two notes of the book, printed here in Greek and my translation, are what Pepagomenos included on childbirth.

Medicine. Notes of the blessed [late] Pepagomenos.
1. For a woman to give birth quickly: bind 11 coriander seeds on a spool; give it to a young virgin girl [who] should bind it on the thigh of the woman in labor. After she gives birth, unbind it quickly -- put a crown of smilax cuttings on the head of the woman in labor and she will give birth immediately.


2. For a woman’s seconds [afterbirth]: put river crabs on charcoal and smoke her, give [her] fasting a drink with grated cinnamon wood.

These notes say nothing about what he actually did in his own medical practice and if any readers know of crabs in the river Eurotas, I would appreciate being informed.  The two prescriptions here are harmless and non-invasive. There are vague, associative, reasons for the use of each of the herbs, but possibly not in the forms prescribed.

Coriander, of which there is a contemporary image above, was considered stimulating, and was used for inducing menstrual cycles and reducing pain.  Smilax, taken internally, was an analgesic for painful menstruation, and for urinary tract infections. Cinnamon was used for nausea, menstrual cramps and heavy menstruation, among other things.  I can imagine that the crown of smilax had some association to crowning.