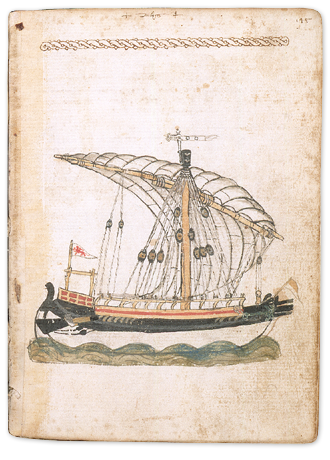 This picture and the one below are from Michael of Rhodes.

In trying to find out how Greeks lived their lives in the fifteenth century, I have come across a few – a very few – references to Greeks in commerce who owned their own ships. Almost all these references come in records from Ragusa (Dubrovnik), where permission is being granted for ships to enter the harbor. There are more references for Greeks from Corfù and Crete, but my focus is the Morea. I am reading a French summary of medieval Latin entries, and I am getting very few indications of types of ship. The ship above may be generously-sized. It is likely that quite a few are like these: 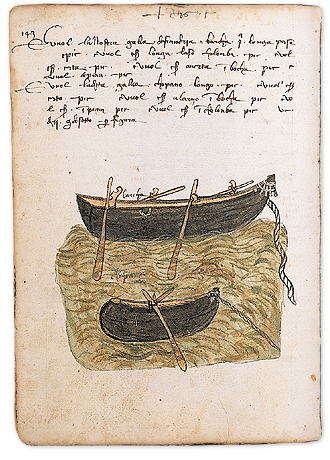 I have one reference from Nauplion in 1450, to an Andreas Fantalouris whose family owned a ship.  Andreas was a large landholder, and may have been involved in a court case with Anonymous of Nauplion who has been a guest of this blog. Otherwise, all the sources I have now are from Ragusa.

Other Naupliots transacted business in Ragusa.  In 1408, Costantinos reported that 20 dozen bread knives were stolen from him while he was drinking in a tavern.  In 1428 a Yannis Canakis brought a ship of merchandise.  In 1435 a Yannis spent 3 1/2 ducats to buy 300 pounds of ship's biscuit for his ship.  These don't give us much information about Nauplion shipping.

There is more for Koroni. In 1428 George arrived in a griparia with salt meat, oranges, and cheese.  Kyriakos Maropoulos brought salt meat, oranges, and cotton.   In 1437 Kosta brought a ship of cheese, barley, fats, and other merchandise to Ragusa.  In 1439 Theodoros brought salt meat.  In 1442 Nikola Mortato brought oranges and merchandise.  In 1443 Maropoulos and Nikolaos brought ships with cheese, lard, and linen.  I've not found ships from Methoni.

In 1441 Nikolaos of Patras brought wheat and salted meat.  There are a number of entries which identify merchants as "Greek" without the name of a port.  If I can assume as does the editor that all the Greeks are from the Morea, that gives me a few more merchants. Yannis arrived with merchandise on his ship in 1446.  In 1428 Greeks brought saindoux, a high-quality rendering from pork fat.   in July 1436 Dino imported 600 steres of millet for which he was to be paid 300 hyperpera. That was 600 cubic metres of grain, perhaps not requiring a large ship, but one larger than the two boats in the picture above.  In 1421 so much grain was offered for sale by a Greek that it was necessary for the grain commissioners to set the prices.

So this is about all I have on Moreote merchants and ships, but it begins to suggest a picture of Greek trade.  I would be delighted if readers could contribute more.