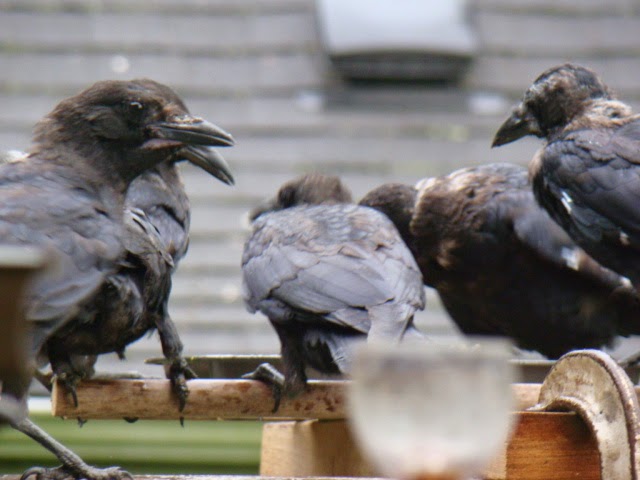 Crows in moult: the view from my desk.

Watching the crows this summer, we have learned to distinguish several of them by a combination of size, curve of the beak, amount of feathers hanging down under the neck, bushiness of leg feathers, and so on. We have lost track of Wow, Tak, and Futhark: there are about eight young the same size. They have lost the red in their mouths, and they no longer scream to be fed. I suspect it is Futhark who dive-bombs a sibling and yanks on his tail. The moult is nearly completed, but so many crows replacing all their feathers has made tremendous demands on supplies of protein.

Korax continues to visit. Washcrow and Her continue their late afternoon quiet time. Her is quite shy and continues to be skittish about our presence, but Washcrow visits, making a quiet rattle which I try to imitate, and then we will exchange assorted clicks and rattles for a bit. At least two other crows have followed his lead, and sometimes from the feeder there will be a wonderful, brief, flourish of crow sounds. One makes a series of small sneezy sounds when he sees me, while one makes small coughs. Washcrow will also, when the feeder is inadequately supplied, come near and let out a blast of two caws, demanding food which I immediately provide.

Watching the crows this summer, we have also gained information we would prefer not to know. Crows get sick. They have crippled feet. They have deformities.  They have avian pox with white spots and tumors. One has a blind eye.  The unwell crows are cranky, snap at other crows on the feeder. The healthy crows don't seem to discriminate against the unwell when we are watching. There is ultimately nothing we can do about the unwell.  The number of them is distressing -- do we have an accurate view of the ratio of well to unwell, or do we see more of the unwell because we provide a reliable food supply?

Sometimes we can help them a little. Pierre constructed a feeder so the crows have three different possibilities for standing – on a rounded perch, on the narrower edge of the pan, on a flat plank. The crow with the crippled foot will land on the plank, foot curled, and then press it down on the plank until it opens up to support him. I discovered that the two crows  with poxy faces liked soft bread – the pox makes sores in the mouth. After a week they rejected it, and I saw that one was getting better: the other has disappeared.

The unwell crows are more difficult to photograph.  They stay at the feeder a shorter time, their  movements are jerkier, and I have wondered if they see the lens of the camera as the eye of a predator. 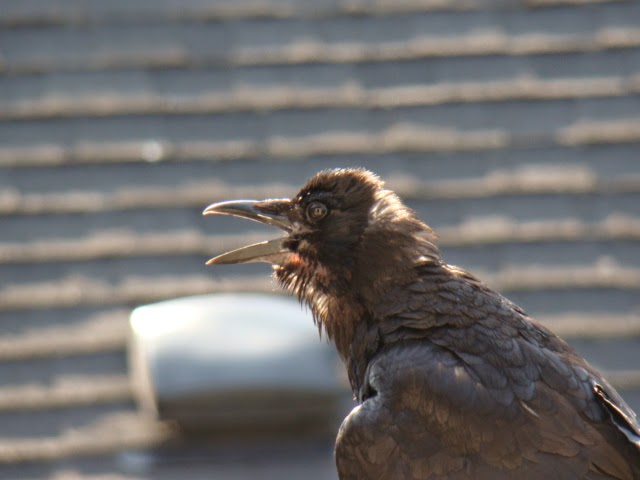 Skin problems on the chin. These seem to be much improved.
This is the crow who makes sneezy noises at me. 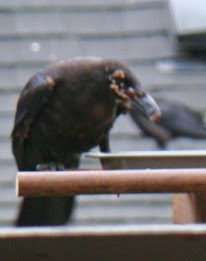 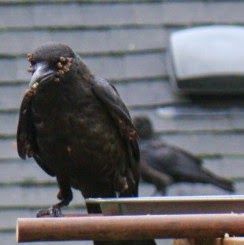 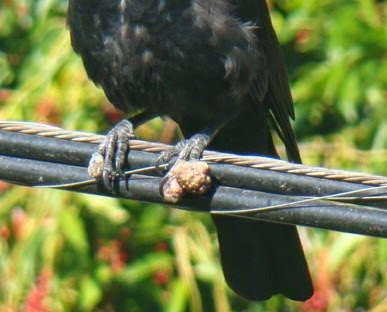 Tumors of avian pox.  The one on the left foot has become
much larger, and the one on the right began since we
started noticing. 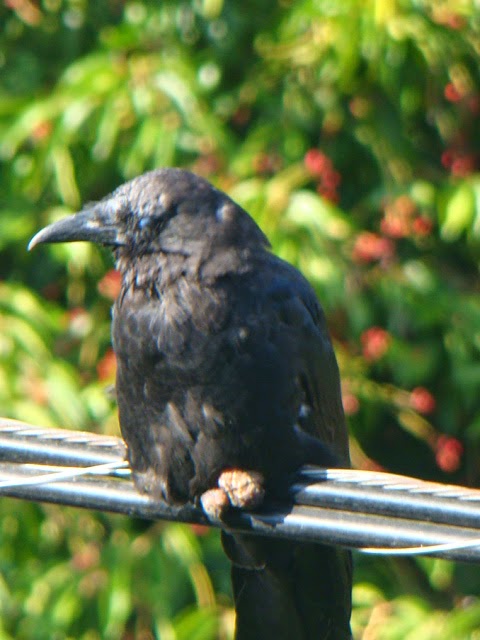 This crow, a relative of Hork, has the pox tumors
on one foot, and is blind in his left eye. 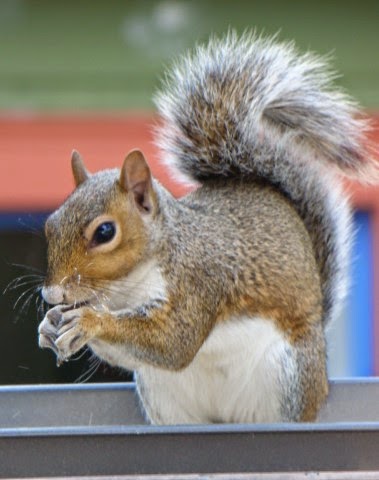 To end on a more pleasing note, the young
squirrels of late summer have discovered
the crow feeder.