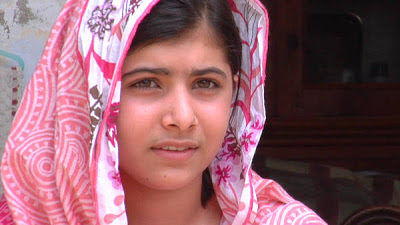 Malala Yousafzai, shot by the Taliban for trying to be a woman.

A girl who could have been my granddaughter was shot today because she had integrity.

Masked Taliban gunmen who were not men enough to show their faces attacked a schoolbus, shooting Malala Yousafzai in the head and neck.  They just missed her brain. They shot two other girls for good measure.  The territory where she lived was supposed to be safe. If Malala does not die, the masked coswards have announced they will kill her.  The masked cowards cannot bear for a woman to have the courage to show her face.

She is 14 years old.  Since she was 11 she has wanted to be a doctor, and she wrote an blog for the BBC under the name Gul Makai  ("Cornflower") about her experiences as a girl in a vicious culture.  She wrote about being afraid. She had been warned several times to stop speaking out.

She comes from a good family, from a father who ran a girls' school, one of the last to stay open in defiance of the Taliban.  She was named for a mythical heroine.  She has already been recognized in Pakistan as a heroine, even before the nastiness that happened today, 9 October.