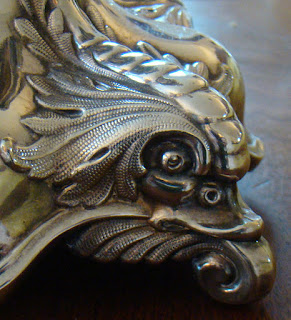 There are four dolphins on each of two candlesticks in this household. They were made in Athens about seventy years ago -- Renaissance-style candlesticks that continue a long tradition of finishing off feet with dolphins.  These are large candlesticks, and look massively heavy, but they are all repoussé and no interior. You will notice the green-man effect given the dolphins by waves that have become leaves.


Every year when I bring the dolphins out for the Christmas celebrations, and polish up their snouts, I am happily reminded of Cyriaco's angry dolphins:

This is Cymadocea, the nymph whom Cyriaco was pleased to fancy as speeding his ship across the Aegean -- you can just see her holding his ship in her left hand.  She is more or less riding on a dolphin, wearing one as a hat, and with a particularly irritated dolphin firmly clamped under her arm.

. . . while Cymodocea, the most glorious of all the nymphs, swam and made music from the depths of the sea, from time to time bedewed me sweetly with her kisses, and carried the iron keel from below. (Letter 19, January 1445, from Ainos)

With his classical interests, Cyriaco must have already known this dolphin from Roman carvings in Italy, but it is my particular fancy that he was taken by the dolphin in Ag. Demetrios at Mistra.  Under the circumstances, you would expect it to look angrier than it does, and its eye quite denies that it is simply a carved post to support an angel's book. 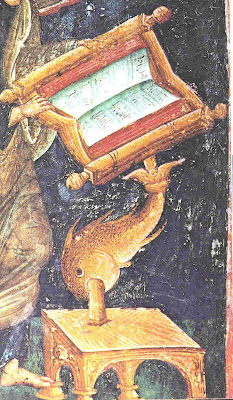 The Byzantines had used dolphins in the service of books for a long time, as in this Gospel manuscript illustration from the 11th (?) century: 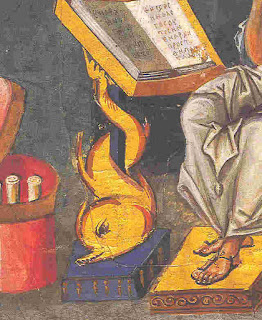 This dolphin is barely a support at all -- the tail makes an unconvincing prop -- more of a weary companion, curled around the post as if trying to act like a cat.  It, too, has the eye of a living creature.

The Mediterranean dolphin has a nice snout but it takes a great deal of creativity to get any angry expression on its face.  These Rethymnon dolphins photographed by Gerola look positively ferocious.