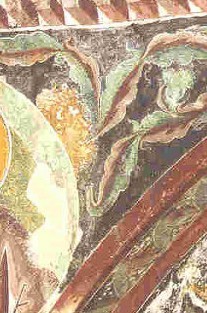 Pantanassa, Mistra
The Green Man -- or Wild Man or Woodwose --is a creature of European folklore and imagery, found frequently in churches.  He does not seem to appear in Greece without a special invitation.  I have been trying to spot Green Men, and I have found a very few. There is an enormous literature on Green Men in western Europe, which I would like to avoid here, and I will define a Green Man as an image of a face with leaves, usually coming out of its mouth.  I have these here for the pleasure of them, but this would be a fine topic for someone's formal study.
The first two Green Men in Greece -- that survive: surely there were others -- appeared in the 13th century, in monastic buildings built by Westerners.  This first is a finial in a corner behind the iconostasis of Ag. Pareskevi, in Halkis. 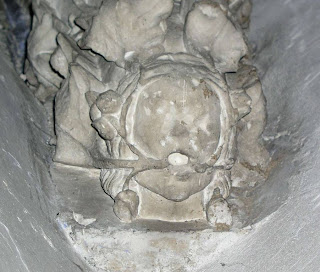 Ag. Pareskevi, Halkis
This next was found in the ruins of the Cistercian monastery of Zaraka, built by monks from northern France, and has been removed to the museum of Chlemoutzi. 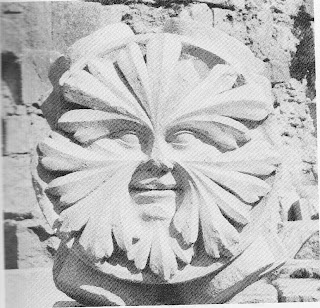 Zaraka
He is strikingly like a Green Man found in the notebooks of Villard de Honnecourt, who drew several.  Villard also lived in the 13th century and was  from northern France. 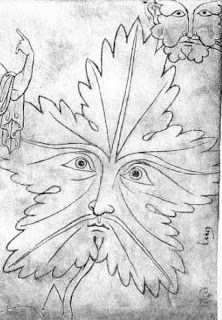 Villard de Honnecourt
Then there was a gap of nearly two hundred years before they appeared in 1428 in the Pantanassa.  Earlier they were faces in their own right.  Now in the Pantanassa, they are startlingly used as decorations for the evangelists in squinches under a dome.  Three groups have survived: one is shown at the beginning.  The groups were supposed to have three Green Men each, one on either side of the evangelist, and one beneath: 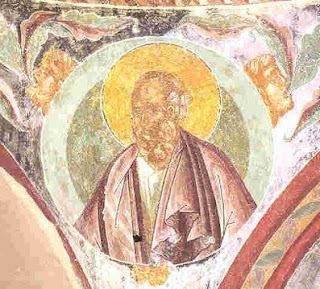 Pantanassa, Mistra
Here the lower Green Man is badly damaged but he survives in the third cluster. 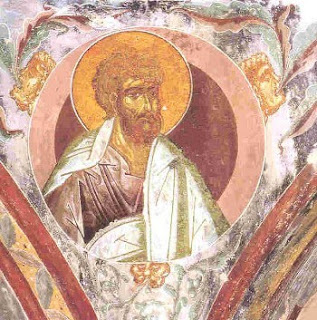 Pantanassa, Mistra
Did these Green Men come from western influences, or had the painter seen the frescos in the Chora in Constantinople where they decorate the Virgin and child, and an angel, in a dome? 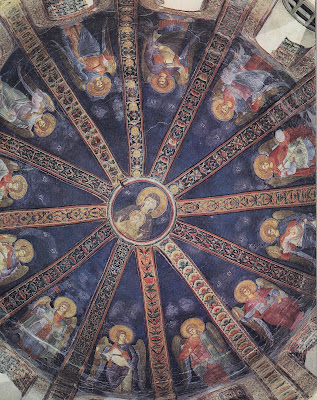 Kariye Cami, Istanbul
In the picture below, where the Virgin is reversed, there is one Green Man just to the lower left corner of the picture, and then a whole line of them running down from the center.

Finally, there is an unlikely trio of Green Men in Nauplion.  The first two, which can be dated exactly to 1708, appear at the top and the base of the carved shield of Francisco Grimani, Captain-General of the Fleet.  The shield has little cannon off the bottom corners. 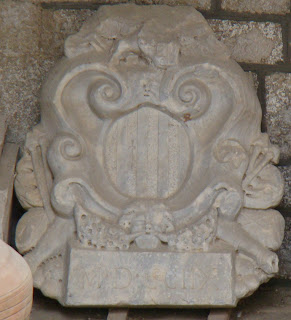 Grimani shield, storage yard of Nauplion museum
The third, my favorite appears on a wooden door panel on the main street.  I have watched, over the years, thousands of people walk past and never look at this marvel of survival. 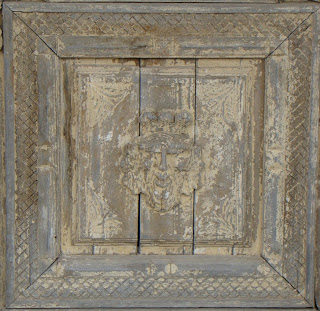 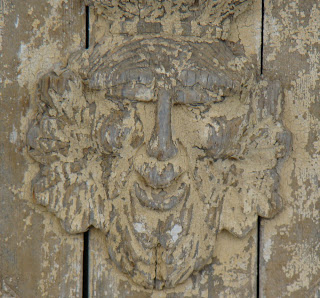 Nauplion door
I would be delighted to know of sightings of more Greek Green Men.

Thanks to Henry Maguire who told me about the Green Men at the Kariye Cami.
Posted by Nauplion at 4:28 PM