We may just forget to die 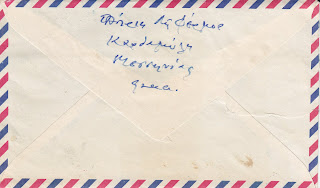 In 1987, I wrote to Patrick Leigh Fermor asking if I might visit him in Kardamyli, and said I was researching the Villehardouins and their castles.  He replied (that is the return address on his envelope):

Dear Mrs. Hanson,
Thank you for your letter and the kind and v. encouraging. words.
I'm going slightly off my rocker about impending calls this summer, and don't see how I'm going to do any work, so don't, please, be too upset if it's no go then: but no harm in trying (0172-73225) when you are in the area.
I look forward to the Villehardouin book as I know too little about them.  Please forgive tearing haste -- Just back from England, where my wife had a hip operation -- and best of luck.
Yours sincerely
Patrick Leigh Fermor

I was in turmoil.  What do you say after you say I am so glad to meet you?     Why would he want to spend any time with me? At Kardamyli I took a room, looked at the "castle," spent a couple of hours sitting on the rocky beach by his house, obsessing all the while. In the evening I drank too much ouzo and decided I would not be the visitor from Porlock.  In the morning when I paid my bill, I asked the landlady if she knew him.  Of course, she said, he walks by here every day.  I gave her a note and a gift of books I had brought for him and went away sorrowful.  I did not realize for twenty years that the woman with her was Joan, his wife.  I have twice more been invited to visit in the area, and promised introductions, but both times it seemed I would be taking something that was not mine.

The obituaries, and the dozens of articles over the past several years, have filled much space with his walk from London to Constantinople, and his kidnapping of the German general.  Essentially, everything he did was larger than anyone else's life.  But there is an unmentioned aspect of PLF that moves me deeply.  In A Time of Gifts, he wrote of an extended stay in the Abbey of St. Wandrille de Fontanelle in the 1950s.  Reviewers of the book have assumed that he was there to write a book, and he did considerable work on one.

Few have noticed a the scattered phrases that put this time in deeper perspective: "I managed, with considerable trepidation, to explain my proposal" (16); "depression and unspeakable loneliness" (19); "having finished a flask of Calvados . . . I sat at my desk in a condition of overwhelming gloom and accidie" (22); " I slept badly and fell asleep during the day, felt restless alone in my cell and depressed by the lack of alcohol, the disappearance of which had caused a sudden halt in the customary monsoon" (28).

Fragments, but I see the Abbey as his shelter while he stopped what must have been years of heavy drinking.  One has only to read Antony Beevor's Crete: The Battle and the Resistance and notice how frequently PLF is cited and how rarely written about, to understand that the kidnapped general was a distraction from a war in which he saw and participated in the unspeakable.  He needed to drink.
Two anecdotes reflect my emotional response to him.  The first is from a Greek tavern owner in the town where PLF and his Romanian princess stayed before the war: "They were," he said, "so beautiful.  And they dressed for dinner."
The second is from a New Zealand writer:

Obituaries from The Guardian & The Telegraph.
Posted by Nauplion at 9:49 AM

Email ThisBlogThis!Share to TwitterShare to FacebookShare to Pinterest
Labels: "A Time of Gifts", Patrick Leigh Fermor