25 March 2011, Google birthday homage to Evliya Çelebi
Pierre MacKay had the pleasure and privilege to be the scholar who identified Evliya Çelebi's own manuscript.  I have asked him to recount that remarkable experience.

* * * * * *
One painless way to acquire a smidgeon of academic notoriety is to attach oneself to someone whose 400th birthday is worth remembering. I had the good fortune of doing so in 1964, even before I knew who Evliya was, and he has been my companion ever since.
I was in Princeton that summer, and able to use the open stacks of the Princeton University library where, in a search for a different and at that time better known author, Katib Çelebi, I ran into a fragmentary English translation of two volumes of Evliya's great ten-volume Travel Journal (Seyahatname). I had little time to find out much about Evliya, because I was preparing for a year in Egypt then, but I was intrigued and, in August, at the 4th International Congress of Classical Studies held in Philadelphia, I found myself talking to Alexander McDonald of Clare College, Cambridge, (a Livy scholar) who knew quite a bit about Turkey, and was also intrigued. He suggested to me that if I found an opportunity to look at manuscripts there, I should not go through the official bureaucracy, but approach the doorman of the library I was interested in, and get help from him.

Pierre MacKay in the 60s.
In February, 1966, I was granted freedom to  study the manuscripts of the Seyahatname in a way that has possibly never been equaled for any scholar before or since. It was not that I was specially prepared to do this work—in most senses I was not prepared at all. All I had was the command of some rather halting spoken Turkish—it is still not good—and the experience of some important manuscript work in Classical Arabic the year before. I taught myself Ottoman by reading the introduction to an edition of the 7th volume of the Seyahatname on cold winter days at the library of the Turkish Historical Society in Ankara. (Seyahatname 7 and 8 were almost the last books permitted to be printed in Arabic script at the time of the Ataturk language reform of 1927–28.) There was a providence working here.

1965–66 was an unusually cold winter in Ankara, and it was a great relief to head west to Istanbul in early February to stay in the charming and utterly impractical Köprülü summer house (the American Research Institute in Turkey. The high fenced grounds of this place were attached to one of the damp towers of the Byzantine sea wall at the southeast corner of the city, which was, disastrously, taken over for a library, and the fence protected an open area where my wife, Theodora, and I could chase our beautiful Egyptian dog around for hours in the evening.) 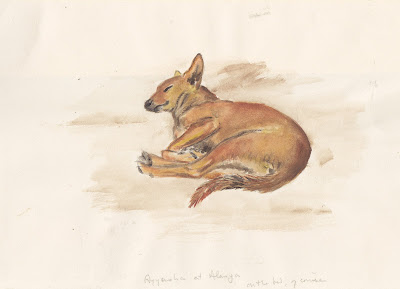 Ayyusha, by Theodora MacKay
I had three major libraries to search, the Sultan Ahmet III library in Top Kapi, the great Süleymaniye manuscript library, and the decaying University library, which had a expanding crack in the masonry running all the way down through the grand central stairway so that all the books had been piled near the center to keep it from splitting apart. I had three weeks for what I needed to do.
At the Sultan Ahmet library, almost unvisited by tourists, I got into conversation with the doorman, and within the hour I was in the office of the Museum director. An arrangement was made that I would pay for tourist entry to the grounds and then go immediately to the library where I was given a long table all to myself. I was asked which manuscript of the many available I wanted, and had to say that I really did not know.  "Then," the Director responded, "you should have them all," and the library staff brought out every single one. 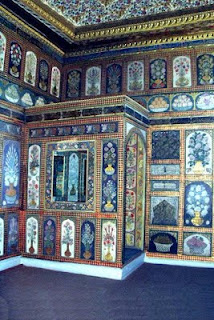 "All" was two full sets of ten volumes and several partial sets, including the one that turned out to be Evliya's own manuscript. There was no way I could do any meaningful collation and that too turned out to be good fortune. I concentrated on physical inspection: bindings, sequence of gatherings, watemarks, notes of ownership and bequest, usage of red and black ink, and almost anything but the text. I was able to take the manuscripts closer to the somewhat opaque windows and look through pages for watermarks, which gave me the opportunity to record the unique Venetian heraldic watermark on the paper used by Evliya. 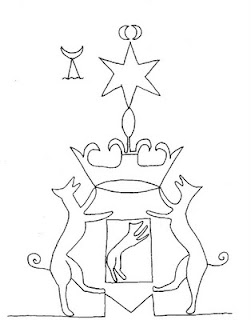 When not at Top Kapı, I was at the Süleymaniye, or the University library, where the sweet, utterly gracious librarian Makbule Hanım took me in charge and found for me the outstandingly fine copy of volume 10, for which Evliya's own original is lost. At the end of three weeks I had enough raw material for twenty lifetimes of work, and the germ of a belief that I might be able to single out one archetypal manuscript and avoid the drudgery of endless hours of collation.
Close to the last day in Istanbul, when I met the Museum director again, I was asked whether I would need microfilm, and which manuscripts I would prefer. Once again I could only answer that I had some good ideas, but no sure sense of which ones I needed. The response was astonishng. "In that case we had better arrange to film all of them." I made a hasty calculation of my resources of travelers checks, gulped, and accepted this extraordinary offer, and when I took up my position at the University of Washington that fall, the rolls of film, beautifully photographed, had arrived before me. I also got films of the manuscripts in the University Library, and from Süleymaniye a copy of the Haci Beşir Ağa manuscript (which was sadly out of focus, but it turned out that it didn't matter).
In 1967–68, the University of Washington gave me a generous research fund for technical assistance, and I was able to make large Xerox copies of all the manuscripts, which I carried with me in a trailer when I drove across country to take up a year's fellowship at the Institute for Advanced Study in Princeton.


There was a "Eureka!" moment there—a day when everything fell into place, not slowly, but in a sort of cascade of discovery. There is no simple way of showing what led up to it, and readers in haste may want to skim quickly through what follows. I remained focused on the physical organization of the manuscript, in part because my knowledge of Ottoman Turkish was still not sufficient to read one of the richest and most variegated prose styles in the history of the language. Evliya, as Robert Dankoff, who knows him better than anyone else living today, points out, can be quite bewildering at first glance.

A particular problem was disorder in in the text of book 4, which divided the surviving manuscripts into two distinct families. To get a clear view of the evidence, I hung a "do not disturb" sign on my office door and laid out on the floor a sequence of twenty or so pages from every copy of book 4 I had available. It was quite easy then to eliminate the later copies, and I was left with three sets of pages, one characterized by copious added notes written sideways in the wide margins and by other features that had led a few earlier scholars to suggest that the annotated copy might be the original.

This manuscript which, for historical reasons I called S, had a fixed maximum of 34 lines per page, and included many, apparently random, areas on which nothing was written, an unusual waste of paper for the 17th or 18th centuries. The writing was consistent in size, and ran along even and regular baselines. These features were not consistent in the two manuscript facsimiles, both dated 1742, that lay on the floor beside them. The 1742 manuscripts (P and Q) usually had 34 lines per page, but sometimes crowded in more lines, which were often written in increasingly cramped and condensed letters. The notes from the margins of manuscript S could be found incorporated into the main text of P and Q and, even more significantly, when a page of S ended on a specific word, so did the corresponding page of both P and Q. The folio numbers for the three manuscripts are not a reliable guide, but the "catch-words" at the bottom of every second page (the b side of the folio) which is repeated at the top of the next page, are very consistent. (The terms for Latin and Greek manuscripts are recto and verso , but it makes no sense to call the first side of a folio of Arabic script a recto , since it is always on the left side when the book is opened.) They are an essential guide for keeping the pages in the right order before the gatherings are sewn together.


That was already enough evidence to identify S as the origin of all other manuscripts, but there was even more. The disorder in page sequence mentioned above was caused by the insertion of several folded sheets, not in the center of a gathering, but off to one side. That arrangement is reflected in copy Q, but not in P, because the added folios fell out and were mistakenly inserted into the center of the gathering, and the copyist of P simply copied them where he found them. At the top margin of the migratory folios of S, someone has written sequence numbers for that gathering only, in hopes of preventing the mistake from happening again. 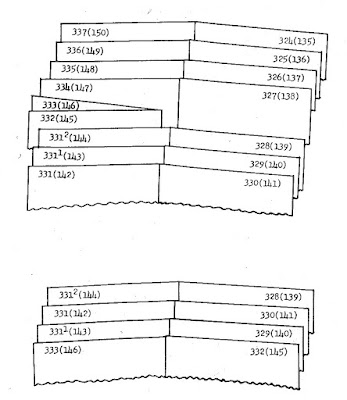 When manuscript S was conclusively shown to be the origin of all other copies, it remained only to show that it was Evliya's own manuscript, and Richard Kreutel had two years earlier made a case for that by comparing the very personal style of handwriting on the manuscript with a number of dipinti on walls and columns left by the self-styled world-traveler on monuments he visited. In the part of book 4 discussed above there is a precious note from Evliya to himself. "I must find something to fill in all this blank space."

Beginning in the mid 1670s, Evliya went through his trunks full of loose notes, organized them, and passed them to a secretary who wrote out the fair copy. As soon as each volume was finished, he began emending the copy, adjusting diacriticals and vowel marks where needed, adding copious notes in the margin and sometimes even tracing over a letter when he was dissatisfied with its shape. This revision seems to have been about half completed when he died. The notes continue through volume 8, but are much sparser near the end.

Because I was able to get copies of all manuscripts, even one that was dismissed as a trivial collection of extracts, I also found the short history of how the Seyahatname was put into its present shape in one immense effort at the end of Evliya's life in Cairo, and brought to Istanbul 50 years later, when three out of the four surviving complete copies were made, all in the same year.