The Winter Voyage: Going Over 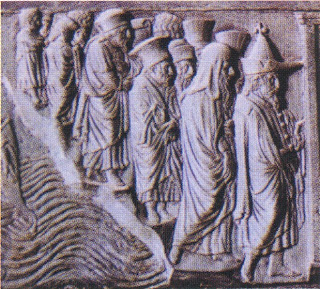 This is the account Sylvestros Syropoulos gave of the Greeks' journey to Italy for the Council of Union which began on this day in 1437, 25 November.  It was probably the worst journey anyone ever had to endure:

It was a Monday. John VIII embarked on a Venetian galley from the Kynegos shore close to the Blachernae palace.  The Patriarch, Joseph, had embarked the day before from the main harbor, the Eugeniou, and sailed up to wait for the Emperor.  The Venetians had provided three galleys.  John's brother, Demetrios, had the third.  All three galleys were crowded with delegates to the Council, servants, hangers-on, and people wanting a free trip to Italy, not to mention the extra ropes and oars, and the cages of animals on deck for food.

Ordinarily, none of these people would have dreamed of sailing the Aegean in winter, but accumulated pressures, including a general shortage of funds and the expense of the chartered galleys, made it necessary for them to leave.  One should bear in mind that the Patriarch was quite elderly and had heart trouble, and that John suffered a great deal from gout and various psychosomatic ailments.  Neither would have been a good sailing companion at the best of times. Neither wanted to go on this trip and neither expected any good out of the results.  Many were grieving, but it was a last desperate attempt to get aid for the tiny empire.

As soon as they were all on board, there was an earthquake.  This was taken as a bad omen, but the trumpets sounded, the people on shore shouted "Cronia polla!" and the ships sailed around the horn. Then they anchored for a couple of days, so the 600 or so passengers could get accustomed to the crowding and the spaces of galleys designed for freight and not for passengers.

It was not until the 27th that the ships, accompanied by another galley belonging to John, three freight galleys, and a Florentine ship, actually left Constantinople.  There was a calm and the oarsmen made little progress.  That night there was a storm "and darkness became tangible."  They were afraid of shipwreck on one of the Marmara islands, but when daylight came, they saw they had been blown past the islands.

When they reached Gallipoli, the Turks shot arrows at the ships and hurled stones with a catapult.  Stopping just beyond, at Madytos on the right-hand shore, there was another earthquake.  The Patriarch sent word to the Emperor that he wanted off, but John told him to wait.  Then while the sailors were off refilling the water jars, they were attacked by a band of Turks.  The sailors dropped their jars and ran back to the ship.  John sent an emissary to the local subassi and asked permission to get water, which was granted.  They spent the night anchored there, or tried to, except that Turkish troops encircled the small harbor, lit fires, and ululated all night.  Then when they tried to sail, the Turks refused to let the Patriarch's galley release the mooring ropes.  The sailors had started chopping at the ropes with axes, before they were finally allowed to sail.

It was that kind of trip, the whole way, except for the two-day stop at Lemnos, where Demetrios Palaiologos had been governor, so the galley crews could loot the island.  [There is nothing about Demetrios' role in this, no comment that John protested this abuse of his subjects.]

It took a week to sail from Lemnos to Negroponte, which they reached on Saturday morning, 7 December.  Venetian officials welcomed them warmly and invited them in to rest.  The Patriarch was anxious to get off the ship and into a real bed, but John said it was unsuitable.  So he had a tent pitched on the shore and rested there for two days, while the island residents brought him gifts of fruit, wine, and food.  John stayed on his galley.
The ships set sail for the Morea on Monday, helped by good winds.  On the second day, the winds turned violent, the ships became separated, and the Patriarch's ship ended up at Sykea, on the coast of Lakonia.  After two more days, when the Emperor's ship failed to appear, they sent a boat up to Kenchreai, at the Isthmus, to see if there were any information.  There was: the Emperor's ship had stopped at Gaidouronessos -- Donkey's Island, near Piraeus, to wait out the storm, and then gone to Kenchreai.

But Donkey's Island could not be taken for granted, either.  There were two Catalan boats and two other boats also waiting out the storm on the island. The Catalans, discovering what was being delivered into their hands, decided to capture the Emperor, but cooler heads prevailed and this was thought unwise. Nearly a year and a half later, in Florence, a man from Rhodes who had been a prisoner of the Catalans and escaped, showed up and told the Emperor's attendants what had nearly happened.

They sailed from Kenchreai to Methone without too much excitement. [This was the Patriarch's galley, and the other galleys, but John and Demetrios and their suites had got off at Kenchreai and rode down the full length of the Morea.  John hated sea travel and you can understand why.]

When the galleys docked at Methone, Venetian officials, and the Latin and Greek church officials all came out to greet them.  The Latins wanted to bring the Patriarch into the city in procession, holding him on either side according to their custom.  The Patriarch was upset at having to process with Latins, but several of the court officials told him it would be simpler to go along with it.  He was led by the Bishops of Corone and Portugal [I have no idea at all what the Bishop of Portugal was doing there], the Greek clergy carried their icons, and it was all very fine until they processed the Patriarch to a very old house which belonged to the Latin church.  Pigs lived on the ground floor.  There was a bed for the Patriarch upstairs, with a filthy pillow.  He was given an inedible meal.  It was the pigs grunting during the night that particularly disturbed him.

The Bishop of Corone went to the house of the Venetian governor -- Giovanni Cornaro -- and asked him to invited the Patriarch there.  Cornaro did, and the Patriarch stayed for 13 days.  They celebrated Christmas together, and things went fairly well.

The question of leaving became an issue.  Quite a few people were refusing to go further because of the crowding and discomfort on the ships.  There were suggestions of hiring another ship from Nauplion, and objections about the delay that would cause.  Then someone suggested that the galleys off-load the slaves they were carrying -- this is the first we have heard of the slaves -- which would give more room.  After slaves were loaded onto another boat for Venice,, plague broke out among them: all died and were buried at sea.  None of the Greeks or Latins was affected.

They galleys sailed from Methone up to Navarino-Pylos to meet John and Demetrios who arrived with a large suite of people from Mistra, including Plethon, Scholarios, and Bessarion.  This made for nearly 700 Greeks [at papal and Venetian expense] in the three galleys. They set sail, and then the sails on two of the galleys ripped.  By the eve of Theophany -- 5 January -- they had reached Kefphalonia and stopped in at the harbor of Pitzkardo.  There was much protest at this, because the winds were so perfect for sailing, but with the exception of one galley that went on to Corfu they all stayed.

That was when the bora started blowing, five days and nights, with such intensity that they were not even able to get out to fill the water jugs.  At the first opportunity, they set out again, and sailed into another storm. The rigging that supported the yardarm tore, it was swinging back and forth, they were sailing in total darkness in winds and waves so hard that most of the sailors could not walk on the deck.  Then the wind swung around and the waves were stronger.  They were pushed back to Pitzkardo where they anchored for three days while the storm continued.  Everyone on the ship was flat out, exhausted and sick.

They were finally able to start out again on a night with a clear moon.  The Patriarch's galley had not cleared the harbor before a gust of wind drove another boat into its side, shattering the oars like reeds.  But they managed to get to Corfu the next day where they stayed for eleven days.
In the gulf of Ragusa there was another storm that scattered the ships, but they all managed to regroup at Corsola.  Here the Emperor and the Patriarch disembarked and had a private conversation, as they had not seen each other since they left Constantinople two months earlier.

They sailed for two days, then the Emperor was so ill that they had to stop at a deserted island.  It snowed. The Emperor was carried ashore to a tent, and nearly everyone was freezing.  They sailed to Zara where they rested for three days.  Setting out again, they ran into another storm and the yardarm snapped.  They repaired the yardarm at Ruvini.  When they got to Parenzo a storm kept them in port for three days.

The rest of the way to Venice was fine, but that was only a day's sail.  A later post will report the winter trip back to Constantinople, two years later.

Both images are of panels from the doors of St. Peter's in Rome made by Filarete.  Notice the double-headed eagle.