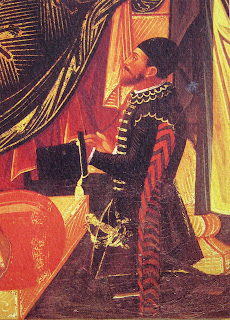 Manessis icon, 1546
S. Giorgio dei Greci, Venice,
(probably) Comin Manessis, d. 1565
There are very few pictures of named kapetanioi to be found. I have identified, with help from a friend, a total of five -- all of them painted in Italy in Italian style -- and only one is a real portrait, though one other shows a recognizable face. All five of them, in Italy, considered Nauplion as their home town and that is mostly because of the accident of history that let Methoni and Koroni be taken by the Turks in 1500, and let Nauplion stay Venetian for another 40 years. 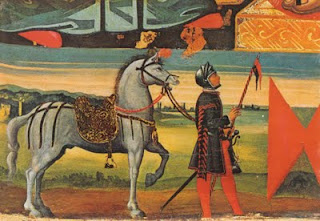 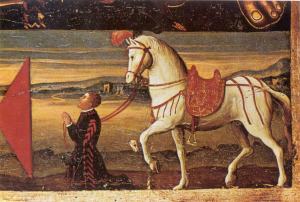 They never dressed that way in Greece.  In this icon the Greek-Albanian Manessis men have become Italian soldiers. These three shown here as donors of one icon were all capi of stratioti.  Comin may just possibly have been Nicolò or Todoro (d. 1545): the records are confusing. Members of the family were prominent in the Venetian-Ottoman War (1463-1478), and in those years owned land in Mani, in the mountains above Kardamyle.

During the war, five Manessis capi whom the Venetian command considered homini da conte had to beg for food for their families because they were near starvation, and men in one of the Manessis villages finally made a private peace with the Turks to avoid starvation.  Later they went back to fighting for the Venetians and one of them, Marino, was captured and flayed by the Turks for his treason.  The Venetians felt a strong obligation to families who had risked so much for them, and after the war, made sure they had positions as capi and land for their families near Nauplion.

Theodoros Palaiologos, father of the man in this picture, was given a fief with a castle at Thermissi, in Nauplion territory, in 1479 (he was aged about 30) in return for leading troops in the Venetian-Ottoman war of 1464-1478. For the next thirty or so years, Theodoros, and Demetrios in turn, when they weren't off fighting somewhere else, were difficult tenants for the Nauplion administration: they ignored the tax requirements, and used their men for private raids into Turkish territory, and their Greek tenants complained to the Venetians about their violence.

After the peace treaty was signed, Theodoros was rehired to lead a small band of horsemen in Friuli. He was made military governor of Zakynthos in 1485, and married Maria Kantakouzene of Corfù in 1486. He fought for Venice in the terrafirma in 1489-95.  After that, Venice found Theodoros useful as a spy, an interpreter, and a minor diplomat.  His name is remembered in Venice now as one of the men who persuaded the Senato to establish a Greek rite church in Venice. He died in 1532.

The position of capi passed from father to son. Demetrios eventually moved to Venice and became a member of the Greek confraternity there.  He probably died in 1570, shortly after making his will  He identified himself as "da Costantinopoli," probably figuring that with his name, Constantinople would be more advantageous than Nauplion or Zakynthos. Some of the family had escaped from Constantinople in 1453.

The  picture of Demetrios appears at the end of the Gospel of John in a gospel book of the mid-14th century, made in Constantinople.  The text behind his head reads X(ριστο)ῦ τοῦ Θ(εο)ῦ Δημήτριος Παλαιολόγος: the servant of Christ the Lord, Demetrios Palaiologos.  The book is now in the National Library of Russia. The artist, probably Markos Vathas or a member of his workshop,painted a number of Italian-style images in the book.  There are also several imperial-type images added to the book by a Greek-style painter, which Demetrios probably commissioned. 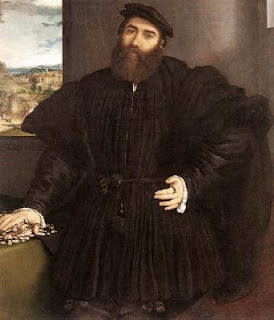 
Mercurio Bua (1478-1452?) was a son nephew of one of the leading archons and capi of the Morea, Petro Bua, who fought outside the Morea for the Venetians once the peace treaty had been signed. Members of his family led the Bua revolt at Nauplion in December 1480 in support of the Kladas revolt when he was an infant.  After Petro Bua died, in 1489, Mercurio (formerly Maurikios) moved to Venice and changed his name to something Italians could manage  Although the family had originally moved from Albania to Ioannina to the Morea over several generations, Mercurio identified himself as coming from Nauplion.

Sanudo said he was a small man, but this did not seem to affect the regard in which he was held.  Beginning with a small band of men, twenty-five or so, he acquired a tremendous record during his career as condottiero, rather than a capo or kapetanios, and eventually was awarded the title of Count of Aquino and Roccasecca from the Holy Roman Empire.  He was twice widowed: this portrait shows a small skull and fallen rose petals beside his hand, and is thought to have been painted in commemoration of one of those losses.

This painting shows something else.  This is not the face of a proud man, which he certainly was, or of a comfortable man, which he had achieved along with the knowledge of a very good and fashionable portrait painter, or of a man who has won an extraordinary number of battles.  He poses as a duty. He seems to be bracing his weight with his right hand and leaning against the wall.  For years, various people had been commenting that he had gout, and once that he had had to miss a festival because he was in bed with gout. Shortly before this portrait was painted, Sanudo wrote that his body was full of gout. As gout advances it affects not just the feet, but joints over the whole body.  The crystal deposits can be felt in many places under the skin and even break through. Bua was in excruciating pain, as well as grief, for this portrait.

When Mercurio Bua died in Treviso, in 1542, he was given a magnificent tomb in S.ta Maria Maggiore. 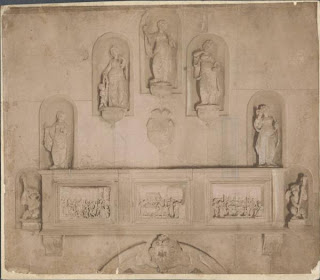 One of the interesting things in the stories of these men is that  four, whom outsiders might identify as Albanian, identified themselves as coming from Nauplion -- originally a Greek city but by 1500  Frankish and then Venetian for nearly 300 years. The fifth man had the name to enable him to claim Constantinople.  The modern insistence on nationalism comes from immature egos, and is an advantage only to suppliers of armaments. To insist on these men as Albanians is to completely ignore the culture in which they lived.  They spoke and wrote Greek and Venetian, and worshiped as Greek Orthodox.  They lived by choice in Venice and the terrafirma. They were professional military, even though sometimes their bands were as small as 15.  We have no idea what they would claim for themselves, beyond Nauplion.

Venetian documents in the 15th century consider Albanians either [1] people living in that geographical area; or [2] migrant herders in the stato da mar territories.  Stratioti were military who lived on land assignments, an inheritance from the Byzantine tradition, whether they were Greek or Albanian or of some other origin.  Albanians were migratory; they moved about with their flocks and had no fixed address.  They may have been soldiers with capi, but they were not identified as stratioti in the documents and when there was no war they paid no attention to Venetian authority.  The matter of stability was key for Venetians, and the Venetians saw that Albanian loyalty was first of all to the clan, not to Venice.  So one of the things you see with these four men is that, though their families of origin were Albanian, they have become urbanized and ultimately Venetian.

My great appreciation to Ersie Burke for her identifications in the Manessis icon, and her information on all of these men. Her book, Coming to Venice, about stato da mar Greeks in Venice, should be out in a year.  It will have much more substantive information to offer about all these capi and their families.


For Mercurio Bua and his portrait, the source is

NOTE: While I have put links here to an Italian site on condottieri , the information should be used with great caution.  We have found  a considerable number of errors in family names and places of origin.
Posted by Nauplion at 5:13 PM