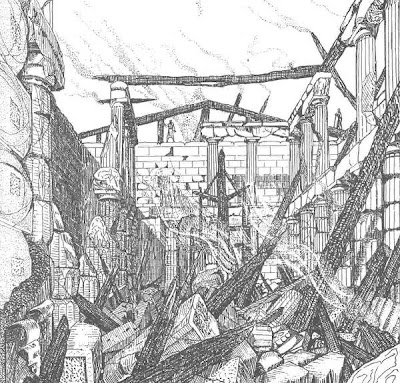 When I wrote the last entry, I had not yet seen Anthony Kaldellis' new book on the Parthenon.*    I was unable to borrow a copy locally, and it is expensive enough that we had to think a good while about buying our own.  But we did, and the book has now arrived.  It has a little more on the fire, much more on other topics, and some very interesting images.  Here you see Manolis Korres' drawing of what the Parthenon must have looked like after the catastrophe.  Korres leaves more standing than I would have thought one could hope for, but perhaps he is drawing on Evliya's description of two levels of fluted columns.


Some writers associate the fire with the Herulian assault in 267. Kaldellis finds evidence in Julian, and others, that it was not a ruin when he was studying in Athens in 355, and suggests it is more likely to have been caused by Alaric's Goths in 396.  I'm not sure why an invasion is necessary.  Pausanias reports a number of temples that burned because of carelessness with a lamp.  Perhaps the idea of external violence is more comforting than that of an internal accident.  More interesting is  Kaldellis' information that Korres found evidence that the columns were rebuilt and the statue of Athena restored.  Not the gold and ivory statue -- I learn that it had been dismantled and turned into cash long before -- but a replacement.  The cella was reroofed with clay tiles, but the space between the cella and the cage of columns was left open.
Then it was converted into a church, and we are hopelessly ignorant of the dating of fire and repair and conversion.  I was wrong when I thought that the Christians took over an empty hulk.  We do not know what the Christians converted.  There were a number of elements to this transformation, but I will leave them with Kaldellis, except for another image from Korres, this of the two stages of the transformation of the apse. 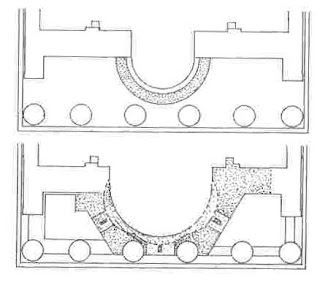 Anothere image in the book that particularly interests me is of the holy water font, or phiale, in the narthex.  Evliya mentioned it, commenting on how mighty must have been the men of old who drank from it.  This is pleasingly reminiscent of Nestor's cup, but Cyriaco who had seen this kind of thing in Italy did not find it impressive.  Here is a drawing of it by Xyngopoulos from a drawing by Pallas, which sounds rather as if we were talking about horse breeding.  Nerio Acciaiuoli had a stud farm which he left in his will for the support of this Church of the Virgin.  We do not know how that worked out. 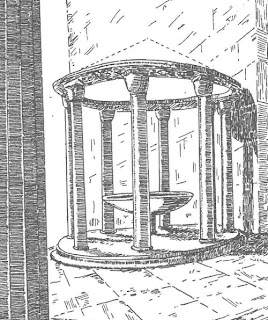