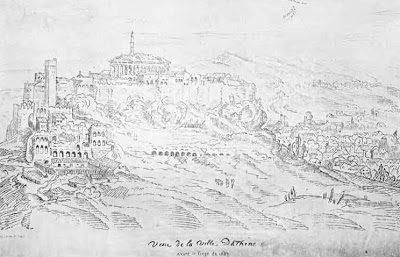 In 1676 and earlier, when Evliya Celebi visited Athens, the minaret was not in the center, but more in the right front corner of the Parthenon: this will do as an impression of what Evliya saw in the extremely hot summer of 1668.

Athens was, you will be fascinated to learn, founded by Solomon. (Evliya is always interested in local history). He went up to the "walled city" which we know as the High City, commenting that its sides went down like the sides of the pits of hell.  Evliya saw the "Friday mosque," not the Parthenon: his descriptions give us the single best image we have of the Byzantine and medieval church of the Virgin.

Think of the Parthenon structurally as a box inside a cage of 46 columns, originally with a lid running from one side of the cage to the other. Remember the lid.  That is how Iktinos and Kallikrates built it.  When you come through the Propylea and head for the Parthenon, you are heading for the west end, which the ancients considered the back side.

The original entrance was around at the east end. Visitors approaching from the east went through a cluster of columns and a recessed door to enter the cella with the great ivory and gold statue (We are, I think, the better off for not actually seeing Athena Parthenos). Here is an imperfect but adequate view of the interior construction. Behind the statue was a wall with an entrance to the treasury. Remember that wall.

When it became a church -- probably in the 6th century -- an apse was constructed on the east end where the entrance was.  Evliya was informed that Plato used to hang a lamp in that dome with naphtha-soaked wicks that were lit in the morning through the heat of the sun on special stones.  Pilgrims reported an ever-burning lamp over the altar, and about 1020 Basil II had given a hanging lamp in the form of a golden dove.

A grand entrance was made in the west end, the treasury became the narthex, and the door between the treasury and the cella became the entrance to the church. Evliya described its finely carved cypress leaves "twenty yards high" which had once been gilded and still retained the insets that once held jewels. (In the late 14th century, Nerio Acciaiuoli needing cash had removed the silver covering Basil II had given for the doors, as well as the gold and jewels. He left money in his will for everything to be replaced but we do not know if it ever happened.) One of the ambones, pulpits, was constructed on six slender columnettes, which Evliya saw supporting a marble throne for Plato under its own dome.  When it was time for the cathedral to become a mosque, it served nicely as the mimbar.  Evliya much admired the colored marble of the furnishings, but essentially all that remains from the interior now is a few pieces like this -- a pretty carving from a world  very different from what had been 900 years before:

The ceiling Evliya saw was made of cypress, gilded and painted.  This was not the lid of marble coffers constructedby Iktinos and Kallikrates.  At some time in the unwritten history of Athens between about 250 and 550 -- Evliya said it was on the night of the birth of Mohammed * -- there was a catastrophic fire in the cella.  The gold and ivory Athena was consumed, and the marble lid came crashing down, bringing down most of the interior structure with the double levels of columns.  Essentially only the box was left.  Archaologist Manolis Korres has scraped off the calcined marble on what would have been the treasury wall behind the statue, and shown how frighteningly thin is the remaining supporting wall.  Athens is on an earthquake zone and it is remarkable that the wall did not collapse long ago, or come down in the incident of 1687.   The Christians took over a shell, not Pericles' Parthenon. Evliya knew of a second fire -- set by a mythical Egyptian sultan who looted the church of its treasures -- and said you could see "wounds" from that fire.  A second fire is quite possible.  [Please read the subsequent entry for some corrections to this account of the fire.]

This mythical sultan is responsible for the disappearance of the jewels and treasures of the church to which Evliya keeps referring, though there were not many jewels and treasures remaining after the Franks of 1204 and the Catalans and the Acciaiuoli had made use of what Basil II had taken from his conquests in Bulgaria and given to Atheniotissa, the Virgin of Athens.

When Evliya saw the Parthenon, he saw a mosque with a minaret, surrounded by 46 columns, and for most of the way around, the space between the columns and the walls was open to the sky, not lidded over.  He saw sculptured scenes on the metopes between the tops of the columns, and more scenes around the top of the cella. Our interpretations are dominated by archaeologists, but Evliya was under no such handicap.  The sculptures he saw contained fairies, angels, dragons, elephants, rhinoceri, giraffes, scorpions, crocodiles, thousands of mice, cats, ghouls, cherubs, and many many other kinds of creatures from this world and others in processions: one of the saved in Paradise, the other of those petrified in Hell.

Evliya says these sculptures are in the courtyard. In Evliya's experience of the classical Turkish mosque, the mosque is approached through a colonnaded courtyard, like the glorious Selimiye at Edirne.  The columns here, joined by lintels but almost completely separate from the interior structure ever since the fire and the collapse of the roof, allow him to interpret the Parthenon-mosque as a mosque inside its courtyard.

He was fascinated with the holy water font in the narthex which he saw as a great goblet, large enough for a man to fit inside -- the men of old must have been mighty indeed to have been able to drink so much!  (Cyriaco had noticed the font, but little else.) He noticed that there had been a pipe organ over the door from the narthex into the church, but what fascinated him was a column supported by an arch.

The mosque made use of the apse as a kibla, which he shows us covered with gold mosaics.  The arches and walls of the sanctuary were overlaid with multicolored mosaics which reminded him of the Dome of the Rock in Jerusalem. (Is there a reason there seem to be no good photographs of these mosaics on the internet?) I am imagining mosaics like these from Thessalonike. 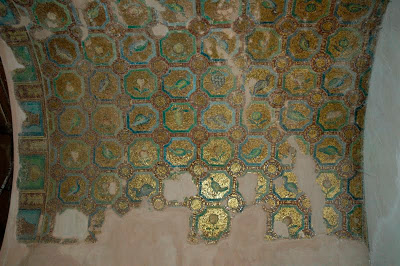 There was a gallery around the interior of the church, and the four columns closest to what would have been the altar were of porphyry.  So he said, Evliya always put the best possible interpretation on what he saw.  He counted 60 columns in all -- because of the gallery there would have been two levels -- all fluted and grooved. (An earlier Venetian visitor had said there were 80 -- this is the only known occasion on which Evliya produced a smaller number.) He doesn't mention the frescoes Basil gave, of which a few ghosts can still be seen, exposed to rain and Athens air for 450 years.

Evliya had seen the great mosques of Damascus and Edirne and Cairo and Jerusalem and Constantinople, but he said:

Presently there are well-constructed locations which have been disfigured by the wounds from the fire, but still, in the sphere of this ancient world, there is no such sparkling and luminous mosque since, no matter how often you enter it, on each subsequent entrance so many kinds of artful, individual and exemplary illustrations are evident and manifest. **

* You will recall that a fire the night of the birth of Alexander the Great brought down the great temple of Artemis of the Ephesians.
** Translation, Pierre MacKay.