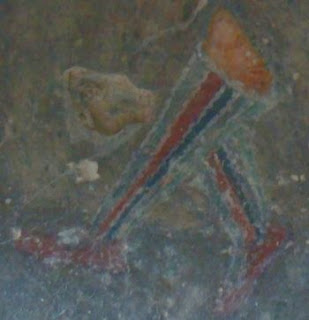 These marvellous striped stockings, much gimped, are all that remain of the figure of a stratiote in a Cretan fresco of military saints, but they suggest something of the multivalent world of the stratioti. The name comes from the Greek word stratiotis, one obligated to military service, and in this period it was supplemented by the Italian notion that it meant something like "on the road." Marino Sanudo described them in the 1480s:

These stratioti are Turks, Greeks, and Albanians living in the Morea, men of great spirit, ready to put themselves in every danger. They ride their horses with great swiftness, cutting down and laying everything to waste. They are by nature rapacious and much given to looting and to the deaths of men, against whom they use great cruelty. They carry shield, sword and lance with a pennant at the tip of the lance, and an iron mattock at their side. Few wear a cuirass, and the rest only their coats of bombazine1 sewn in their fashion. Their horses are large, good workers, fast on the hoof, and always carry the head high. They eat grain and straw. These people are much experienced in war . . . and their city wall is the sword and the lance.

OK, that sounds a bit like the Spartans claim for themselves, but the stratioti were -- given that this is a fallen world and much happens that we would prefer did not -- the stratioti were pretty magnificent.  Those Sanudo writes about had been imported from Modon, Corone, and Nauplion in 1482 for the Ferrara war.  There had been days of arguing and a near-revolt against Minio over the pay scales offered, and then as soon as they were off-loaded from their barges on the Brenta canal, most were massacred in a charge by Federigo de Montefeltro and his steel-armed warriors.  The stratioti were having no more of this, so they refused to fight until they had a commander of their own -- "not one of those Italians " -- and announced they would take no prisoners. The general practice was to try to capture individuals for whom they could collect ransom.  Meanwhile they engaged in a little looting while the Venetians decided what to do. Minio arrived back in Venice from Nauplion just in time to be appointed their commander -- he seems to have been thought the only person likely to be able to control them, and was commended for their military success.  But the Ferrarese and their allies were frightened of losing their heads or, if not killed, their ears, and the stratioti's reputation possibly accomplished more for them in Italy than actual fighting.
Venice had been hiring stratioti here and there in Greece for about 60 years, but their first real use came early in the 1464-1478 war when four-fifths of the fanti Sigismundo Malatesta had brought from Italy died of plague. Stratioti cost considerably less, they supplied their own horses, they knew the mountain routes that had to be negotiated as the Venetian troops dodged and tracked the Turkish.  And, as Barbarigo wrote, "These peasants are better fighters than the Italians." Barbarigo was supposed to oversee Malatesta and coordinate the war efforts, including food, pay, hiring and firing.

This war had very little commitment back home, and much of Barbarigo's wonderful letters are concerned with trying to get food for his troops, pay for his troops, straw for their horses.  Very little of anything was being sent out, and he had before him the example of stratioti in country, too long without pay, who had decapitated their Italian captain. Then he had trouble finding aides who could speak and write Greek to deal with them, and he was on short rations himself.  He had to send half of his stratioti up to Nauplion territory, because Modon and Corone territories could only feed 150 horses each.  Meanwhile, the stratioti were selling off their future wages at one-quarter of their worth to get a little money for a little food.  Most of them were without shoes, and many of were sick from malnutrition and malaria. Then there were the occasional raids that acquired a couple of thousand sheep and goats, and half of them had to be slaughtered and abandoned because the band of 40 or 70 stratioti couldn't manage them across the mountain passes fast enough ahead of the Turks.
Stratioti are rarely singular.  They are almost always mentioned in groups, though two were assigned to take the Anonymous Naupliote from Mouchli to Argos.  They fight in bands, almost always family-related groups, usually between eighteen and thirty males of all ages, but on occasion as many as 500.  We have very few names of individual stratioti, but we have many of names of kapitanioi, or capi -- Krokondeilos and Emmanuel Kladas, Michali Rallis, Thodoro Bua, Petro Bua, Bozike, Blessi, Theodoros Palaiologos, Demetrios Palaiogos (related, but not imperial), and towns all over Greece have names familiar from stratioti  in the 15th Century -- Gerbesi, Manessi, Zonga. Venice rewarded the kapitanioi and gave them lengths of red or black cloth on occasion when there wasn't money, and generally provided widows' pensions, daughters' dowries, and hired the sons.  The stratioti were so much food for the birds and the dogs.
The original theory, and the practice that the Venetians tried to maintain as much as possible, was that they received land to farm in lieu of pay, they took along their own provisions, provided their own equipment, and could have whatever they could get in loot.  Stratioti could easily become bandits when there was no war on, and in most accounts of war in the Morea -- when not actually facing an organized Ottoman force -- it is very difficult to say why a particular action is war rather than banditry.

However, the realities of the Ottoman war meant that Venice needed to hire troops from the Albanian clans who moved their herds and huts from mountain to mountain and had little or no local allegiances or concern for Venetian discipline.  In both Minio and Barbarigo there seems to be an exasperated equivalence that stratioti = good, Albanians = bad, but stratioti were as often Albanians (from earlier periods of immigration) as Greek, and were perfectly capable of rebellion.  Minio calls them all "zente desregulata -- lawless people."

Still, these were ferociously loyal men, fighting, hanging on after months of not being paid, sometimes performing amazingly heroic actions.  Sometimes, after not being paid for a very long time, bands would go off to fight for the Turks for a while instead of against them.  Sometimes, desperate for food, a group would make a private peace so they could tend to their crops for a season.  And once a group of stratioti, furious at the Ottoman-Venetian peace settlement, declared their own six-month war against the Turks. One can only imagine how difficult their lives must have been to prefer unpaid service under the Venetians to quiet herding on one of the Morea's beautiful upland pastures.

They are raggedy men -- the stockings in the picture, and the red shoes, were probably sold a few months later so their owner could buy food.  The image I cary of stratioti is a scene repeated over and over in the various reports: a crowd of hungry men barefoot in the dust of the plateia at Nauplion -- now paved with marble and place lined with Rossini-esque buildings and cafes and Venetian lions and a couple of repurposed mosques -- crying "Pan! Pan!"  Bread.