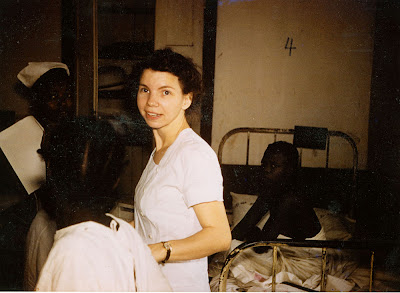 My mother was set free today, at the age of ninety-two and a half, the last fourteen months completely bed-ridden, the last five years essentially blind. My brother and his wife kept her in their home, gave her exceptional, loving care.

These years of captivity were so wrong.  This was a woman delighted to be told she resembled a butterfly. Always moving. She loved dancing, though as a Baptist she couldn't. A petite Southern lady -- always a lady, and like the archetypal Southern lady, tough, unable to understand "you can't" -- who intended to become a professional organist, and who became instead a missionary doctor.  She thought, when she and my father arrived at the Ogbomosho Baptist Hospital in September 1946, that she was to take care of obstetrics and gynecology.  Those were the good days, when she had some preparation for what she encountered.

The picture above is of my mother in the women's ward of the hospital. For long periods of time she was the only doctor for a million square miles, and most days, even when she did surgery, she saw two hundred patients in clinic.  The first four years there was no electricity -- my father put that in, for the hospital and the mission station -- and night emergencies occurred in the presence of kerosene lamps, night surgery with the headlights from a car. Every single night she was wakened at least once by the distant knock of a bicycle pedal against the frame, the waver of a lantern, as a hospital messenger brought word of an emergency that couldn't wait till morning.

At every chance she got, she pushed oranges, fingernail brushes, beans. Nutrition, sanitation, and the difference between right and wrong. She taught piano lessons, Sunday School lessons, planted seed boxes and directed the gardener who raised most of our food.  She taught me from kindergarten into the middle of my second year of high school -- piano, blood typing, Latin.  In free time, she learned astronomy and read about mountain climbing.  She could name every peak when we flew over the Alps. She knew the name of every constellation and star we could see from our front porch in Ogbomosho, and when she explained the light-years she talked about the music she would hear up there in Heaven.

In the 40s and 50s, even missionaries could afford household help, so she taught someone to read and to cook. She taught herself to make bread on a wood stove so she could teach him. We had formal meals, cloth napkins, a steward in brass buttons.  The floors gleamed.  She loved color, flowers.  Our house was always prettier, more ordered than almost any other house we saw.

For a woman who had given more than fifty years to healing, it was great injustice for her to be trapped by a deteriorating mind, blinded in one eye by a careless eye surgeon, unable to walk on legs that had cycled for 40 years, danced, run up and down stairs, taken brisk daily walks. A women who wept over the beauty of light barely able to distinguish between light and dark, though sometimes she could catch an intense red.  A woman disciplined about the emotions she showed, determined we would not learn fear, she was ravaged by sundowner syndrome.  An obstetrician, she nearly bled to death in childbirth because there was no obstetrician available when she gave birth in Nigeria to my brother. A surgeon, she underwent at least 7 major operations herself, and knew all about the pain, the submission, the fear.

There is one last operation, today, when her brain is removed and sent in ice to a researcher who is studying brain changes in dementia.

We go to what we love. My mother dances today with the Lord of the Dance to the music of the spheres.  My mother is become light.