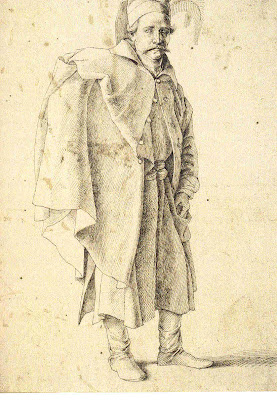 
When The City was taken in May 1453, the Morea went into panic.  It was said that both the despots, Demetrios and Thomas were leaving for Italy.  No one knew what was going to happen to the Morea. There was no identifiable authority.  This is when Petro Bua enters the written record.  He urged the Albanians to elect their own leaders, and they did, and despite Greek historians recording this as a revolt or uprising, they were in fact filling the void left by the total failure of the Greek despots.

The Albanians in Thomas' despotate of the former Principality of Achaia chose Centurione Asan Zaccaria, claimant to the Principality and half-brother to Thomas’ wife. He had "escaped" from prison at Chlemoutzi where Thomas had held him since he had tried to join Murad's invasion of the Morea in 1446.  Those in Demetrios' despotate chose Manuel Kantakuzenos, Demetrios' governor of Mani, great-grandson of the emperor John VI Kantakouzenos, and grandson of Manuel Kantakuzenos, Despot of the Morea.  Both men, neither Albanian, were reasonable heirs to the territories for which they were chosen.  Sphrantzes said that essentially all the Albanians in the Morea were in revolt: the Venetians said thirty thousand.


Petro Bua was identified by Chalcocondyles as a man of rough manners and dishonorable character (Πέτρου τοῦ χωλοῦ, ἀνδρὸς τὸν τρόπον οὐκ ἀγαθοῦ), an identification that modern Greek writers have accepted without question and without evidence, because he was Albanian, although after all the time I have spent with Manuel Rallis and Demetrios Laskaris Asan (whom Chalcocondyles never criticizes), I am not clear how that description would distinguish him from a great many other archons.  In fact, in contrast to what the Venetians reported about Rallis and Asan, they reported Petro Bua to be a sterling character.

More specific information about him has survived than for most of the other archons in the Morea. [But see note below.] His great-grandfather, Ghin Spata, had been Serbian despot of Angelokastro ("Despot of Romania") and governor of Arta and Nafpaktos. His grandfather, Paul Spata, had been forced out of Angelokastro by Carlo Tocco in 1405 and then had handed over Nafpaktos to the Venetians in 1407. The family seems to have moved into the Morea then, along with a great many other Albanians, and may have been part of the immigration that Manuel II so praised. A clan-leader (the fall-back description for Albanian leaders), Petro Bua was probably a kefali for the despotate, though there is no evidence for where. When Manuel Kantakuzenos was chosen leader of the Albanians revolt against Demetrios, he took the name Ghin, the name of Petro’s father and the name Petro would have given a son of his own: this may suggest a particularly close relationship between them.


The 1453 attempts at leadership and organization quickly spun out of control, with the despots under attack and fighting each other for supremacy, and Ottoman forces being invited in to help or to tame the rebels.  Various individuals were in negotiation with the Venetians and the Genoese and the Neapolitans, and finally twelve archons  decided the only sane thing to do was to guarantee their own protection by Mehmed.   I have written on this before, and it need not be repeated, other than to say that Petro Bua (Petro end of first line below, Bua, misspelled,

beginning of second line) was one of the twelve.  The dean of Moreote historians, Denis Zakythinos, in his brief discussion of this document, lists the first eleven archons -- all Greeks -- and then adds "etc." for Petro Bua.  Bua is the outsider in this group of archons, not just as an Albanian, but also because to judge from surviving documents his family had apparently not intermarried with the families of the other archons on the list, although later in the century we find marriages of Buas with descendants of Manuel Rallis and Krokontylos Kladas.

By 1459 Venetian documents called him caput of all the Moreote Albanians, and he, with Manuel Rallis -- one of the twelve -- was fighting with the Venetians at the Isthmus in August 1463.  It is not clear what happened to their agreement with Mehmed: I speculate that Mehmed's land assignments in 1460 took little account of that document.

Bua was frequently noted as having sent written information when kapetanios in the 1464-78 war, and although all of the archons can be assumed to have had the Byzantine education of their class, of the twelve, it is Bua, the Albanian, who is recorded as owning important manuscripts.  Uncle of the famous condottiere, Mercurio Bua -- he had no sons of his own so Venice recognized his nephews Mercurio, Nicolò, and Petro as sons -- Petro Bua was still leading stratioti for the Venetians in the Ionian islands twenty-five years after the submission and as late as 1489 was being given a new contract by Venice.   I am not sure when he died: I find no mention after 1489 until May 1501 when he is "the late Petro Bua."

He was crippled (χωλος) but not so much that he could not ride a horse.  He was given a gift of fine scarlet cloth in 1464 in appreciation of his loyalty to Venice. He made at least three trips to Venice to get payment for his troops.  In 1476 Venice gave him triple the cash gift they gave Kladas at the same time. In 1478 the Doge made him a knight and gave him a gold robe. Thirty thousand Albanians regarded him as their leader.  This just about takes care of all the "facts" we have for Petro Bua: it is not enough.


ADDITIONAL NOTE 4/3/12: On further reflection, I do not feel I can trust the genealogies I have seen for Petro Bua, in that if they give him sons, how can I believe in his father?  If anyone knows primary sources for family before 1454, I would be grateful to know about them.  Also, I have been looking at the Albanian names in TT10, part of the Ottoman cadaster for 1460-63.  I am finding clusters of names I know were used in his immediate family in the vicinity of Gardiki -- and of Chlemoutsi.  This suggests possibilities, but cannot prove them.