The imitation of the immortality of the gods 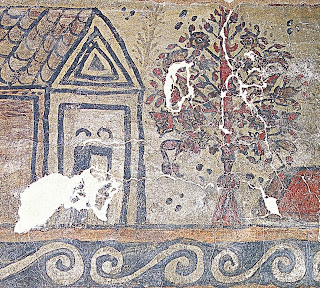 In contrast, what I have found on George Gemistos Plethon, has been too much.  An unnecessary number of males -- rarely a woman -- seem called on to discourse on his philosophy of the soul. Very few can write about Gemistos without feeling obliged to discuss his paganism.  And very few can avoid yet another unnecessary revew of his suggestions for reorganizing the Morea on the Spartan method.  (No one notices that his suggestion for 6000 soldiers reflects precisely the number of men shown to be available over and over during the century.)  So over and over in working on my book, needing Gemistos if I was to write about Mistra, I have come up between a rock and a hard place in finding Gemistos inaccesible to my contemporary concerns.

Until I analyzed his monodia for Cleofe. George Gemistos spoke of the beauty of her luminous body, and of her even more luminous soul. He, in fact, mentioned her beautiful body three different times.  And it occurred to me that this was a man with a physical body, and a man who liked the fact of a woman having a physical body, and that he was a man who has been carefully muffled by the heirs of the Byzantines who really did not like bodies at all. When you treat him like Plato -- even Plato wasn't Plato -- you get a marmoreal automaton.  My Greek is not adequate to sustain me through very much of Gemistos, so I was glad to find the Alexandre, Pléthon: traite des lois, which has a facing French version, and between them I found evidence of a warm and interesting human being.  This is  Gemistos on affection between and man and a woman.


Very early in the Laws he says, "For the others [in contrast to the celibate] it is a thing most beautiful and most divine to marry and have children." Later he says  -- paraphrasing -- that the sexual relationship was instituted by the gods to perpetuate the race of mortals, to give them a sort of immortality, and that desire is a gift of the gods.  This way, we approach the gods. We cannot deny the importance of this act which in our mortal nature is the imitation of the immortality of the gods. We ought to see that we do it well. We do this [in private] not because of shame, but because most humans do not wish to display publicly those religious acts which they regard as the most holy. It is the most personal thing people can do, and since it is one of the most important things given to people to do, it deserves to be done as perfectly as possible. Nothing is more shameful than an important act poorly done.