The Cats of St. Nicholas 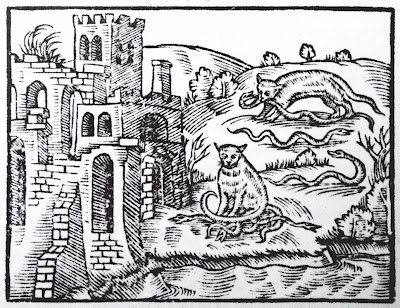 Ben Arbel sent me his article, "Cypriot Wildlife in Renaissance Writings,"* which put me on to the cats of St. Nicholas. After looking on Google, I find may have been one of the only people to go to the Mediterranean who hasn't known about the cats, though I did know the Seferis poem (below). Renaissance visitors thought these snake-killing cats were amazing, even miraculous, and I can affirm the accuracy of their observation. For 8 years of my young life in Nigeria, I had a miraculous cat.

St. Helena tends to be associated with crosses, but visiting Cyprus in 328, or 327, or some other year, she found it infested with poisonous snakes. She had hundreds of cats imported from Egypt or Palestine to the place where her ship had landed, the Akrotiri peninsula south of Limassol. (Imagine galleys full of cats . . ..) At the time Cyprus was suffering from an extended drought, and Helena had Constantine send out a governor to help out the people of the island.  Constantine's governor, Kalokeros, founded a monastery on Akrotiri.  The cats attached themselves to the monastery and, except for a 400-year break between the late 16th century and 1983, the cats have remained in residence.

"It is wonderful to see them, for nearly all are maimed by the snakes: one has lost a nose, another an ear; the skin of one is torn, another is lame: one is blind of one eye, another of both.  And it is a strange thing that at the hour for their food, at the sound of a bell, they collect at the monastery and when they have eaten enough, at the sound of that same bell, they all depart together to go fight the snakes."


This has the ring of truth, having seen herds of semi-feral cats in Greece, though I doubt the maiming came entirely from the snakes.  Suriano distinguishes between the cats eating and hunting snakes: similarly, my own cat never ate snakes, but would bring them to us -- always cobras -- with their throats bitten out.  Usually her eyes would be clouded over for a day or two after the snake: cat eyes are the height of a cobra's head when it raises to spit, so I find it striking that Suriano saw a cat blind in both eyes. (My experience was in Nigeria.  I don't know anything about snakes, poisonous or non-poisonous, on Cyprus.)


The Cats of Saint Nicholas

But deep inside me sings
the Fury's lyreless threnody;
my heart, self-taught, has lost
the precious confidence of hope . . .
Aeschylus, "Agamemnon"

'That's the Cape of Cats ahead,' the captain said to me,
pointing through the mist to a low stretch of shore,
the beach deserted; it was Christmas day —
'. . . and there, in the distance to the west, is where
Aphrodite rose out of the waves;
they call the place "Greek's Rock."
Left ten degrees rudder!'
She had Salome's eyes, the cat I lost a year ago;
and old Ramazan, how he would look death square in the eyes,
whole days long in the snow of the East,
under the frozen sun,
days long square in the eyes: the young hearth god.
Don't stop, traveller.
'Left ten degrees rudder,' muttered the helmsman.
. . . my friend, though, might well have stopped,
now between ships,
shut up in a small house with pictures,
searching for windows behind the frames.
The ship's bell struck
like a coin from some vanished city
that brings to mind, as it falls,
alms from another time.
'It's strange,' the captain said.
'That bell — given what day it is —
reminded me of another, the monastery bell.
A monk told me the story,
a half-mad monk, a kind of dreamer.
'It was during the great drought,
forty years without rain,
the whole island devastated,
people died and snakes were born.
This cape had millions of snakes
thick as a man's legs
and full of poison.
In those days the monastery of St Nicholas
was held by the monks of St Basil,
and they couldn't work their fields,
couldn't put their flocks to pasture.
In the end they were saved by the cats they raised.
Every day at dawn a bell would strike
and an army of cats would move into battle.
They'd fight the day long,
until the bell sounded for the evening feed.
Supper done, the bell would sound again
and out they'd go to battle through the night.
They say it was a marvellous sight to see them,
some lame, some blind, others missing
a nose, an ear, their hides in shreds.
So to the sound of four bells a day
months went by, years, season after season.
Wildly obstinate, always wounded,
they annihilated the snakes but in the end disappeared;
they just couldn't take in that much poison.
Like a sunken ship
they left no trace on the surface:
not a miaow, not a bell even.
Steady as you go!
Poor devils, what could they do,
fighting like that day and night, drinking
the poisonous blood of those snakes?
Generations of poison, centuries of poison.'
'Steady as you go,' indifferently echoed the helmsman.