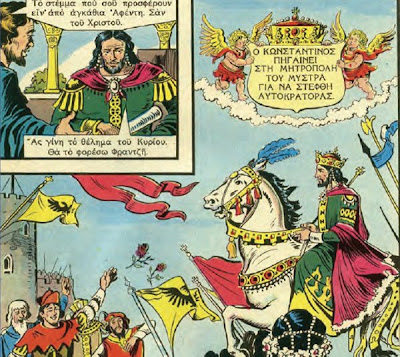 Constantine riding to his coronation at Mistra. However, given
what we know about his father and brothers, he is
likely to have been short and light-haired, if not blond, and
galloping on the hillside of Mistra would have been inadvisable.

Continuing with Tito Papamastorakis' article (see below) on Mistra, this is what he has to say about the so-called coronation of Constantine Palaiologos. (The Classic Comics images are from the article..)

If you recall the interior of Ag. Demetrios, the little Mistra cathedral, you may remember that some of the frescos have been sliced off for the addition of galleries above.  This has been explained, and by people who should know better, as having been done for Constantine's coronation.  For one thing, look at the timing. John died on October 31.  It was nearly a month before the emissaries from Constantinople could get a boat for the Morea.  Constantine was made emperor on January 6, the Feast of the Epiphany.  When was anyone going to have time to slice off the top of Ag. Demetrios, build up new walls, and put on a new roof?

An inscription in Ag. Demetrios attributes the rebuilding to Matthaios, Metropolitan of Lakedaimon.  He is known to have been Metropolitan in 1427-29, and Methodios was Metorpolitan as 1439.  That timing is fairly suggestive, too, but it has not stopped people who should know better from claiming that Matthaios crowned Constantine.

We have clear contemporary statements that Constantine was never crowned.  Papamastorakis lists Doukas, Ioannis Eugenikos, Ioannis Dokeianos (all three men who would have known him personally), and the Short Chronicles as specifically saying so, calling him ἀστεφῆ (without a crown) and ἄστεπτο (uncrowned).  One Short Chronicle (and Pseudo-Sphrantzes) do say he was crowned, and this is the preferred version, used in Runciman (much cited because he wrote in English), Zakythinos, and Classic Comics.

There is something uncomfortable about the preference for the Classic Comics version of history and a non-existent crowning -- this is the nationalistic version, the chauvinistic version of Mistra as the sophisticated.  It is perhaps psychological  compensation for the enthusiasm with which Constantine's death in 1453 is lamented. 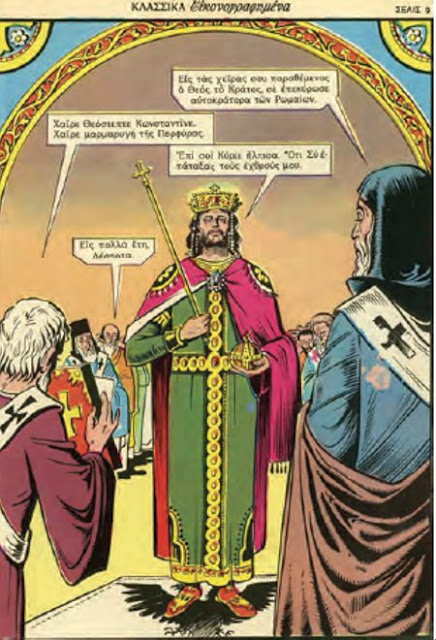 Constantine crowned in Ag. Demetrios, standing on the stone
put into that position in the 19th century.