Image of signatures of Demetrios Palaiologos, 1451.*


I was recently reading Warren Woodfin's fascinating book, The Embodied Icon,** which discusses ecclesiastical dress. At one point (173) he relates the color of the ink used in signatures to the rank and costume of the signer: patriarchs tend to wear blue and sign in blue ink; the emperor wears red shoes and signs in vermilion; despots wear shoes of mixed purple and white, and sign with purple. (There is also an article on this topic here.)

I like that idea a great deal, but it makes me think that no one told the later Palaiologues.  The treaty Theodoros I signed with Venice in 1394 described itself as "subscriptione in fine instrumenti rubei literarum manu propria domini dispoti . . .."  Theodoros II signed a letter to the Pope and a grant of land in red -- vermilion -- ink.  The same with the signature of Demetrios, above.  The image in last week's entry showed the little Despot Theodoros wearing red: we couldn't see his shoes.

A signature of Andronikos in 1414, confirming a grant from Manuel in Thessaloniki on his way south to build the Hexamilion -- is in black.***  He was a minor then, just 14, and the signature is in the genitive -- Andronikou -- "by me, Andronikos." You will notice that Demetrios' signatures above and below are in the nominative. 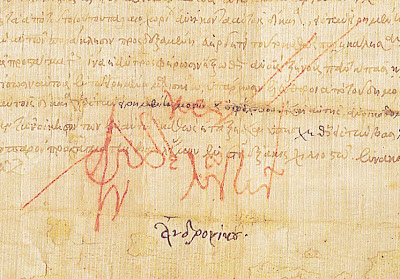 A  second signature at Thessaloniki, this from 1419, is in red and the ending is in the nominative -- ὁ δεσπότης.***  Eighteen was a significant age for Byzantines, and I believe the change in case ending is an indication that Andronikos had become of age to rule for himself, without a regent. 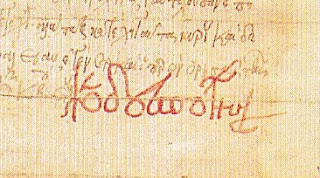 A signature from Demetrios,*** when he was Despot of Lemnos under Mehmed II,  is also in red.


* Image from: "Σφραγιδες των τελευταιων Παλαιολογων και των περι αυτους," Νεος Ελλςηνομνημων 1: 416-432.
** Warren Woodfin, The Embodied Icon.  Oxford University Press, 2012.
*** Treasures of Mount Athos, Thessaloniki 1997. Ch. 13.  The quality of the color printing in this heavy, expensive volume produced by Athos and the Ministry of Culture is shameful.
Posted by Nauplion at 8:36 AM