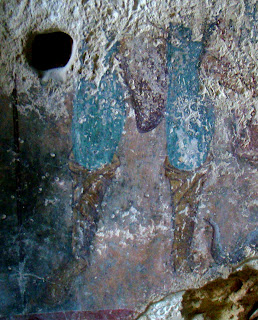 One of several pairs of blue soldier legs:
Rethymnon district. Another pair of legs here.

By 1444, there was no army in the Morea: a generation of men had come to adulthood without military training or experience.  There were the stratioti bands, there were the armed bands that worked for individual archons, but there was no organized group under any sort of centralized military command.  This was thoroughly demonstrated at the Ottoman attack on the Isthmus in December 1446, when Constantine and Thomas Palaiologos were nearly killed, trying to hold together the Moreote troops who panicked and ran. [Allow them a little leeway: the wall construction couldn't have held off Boy Scouts with pocket knives.]  Doukas says there were 60,000 in the Greek army and a Venetian letter to John Hunyadi said the Turks took 60,000 prisoners.

We need not give this number a moment's credence: 60,000 would have been far more than one-third of the total population.  Nor need the odd zero cause too much concern:  the number of participants in the Kladas revolt varies from 160 to 16 to 166 to 16,000.The most consistent number for
the number of troops in the Morea is 6,000.

6000 goes back at least to the Chronicle of the Morea which says that the Prince had available 18,000 mounted knights, of whom 6000 were on duty at any one time.  The Chronicle has a Homeric sense of numbers and need not be given any credence either, but that seems to be the first appearance of the 6000.

In 1417 -- maybe a year earlier, maybe a year later -- Plethon suggested that the Morea needed a force of 6000, always on duty, not having to take part of the year off to farm for their families.  6000, is, in fact, a reasonable number and Plethon would have had access to any population and tax numbers available.

In 1418, a Venetian letter to the Despotate cited a letter of 1417 from the Despotate saying that they had 6000 Albanians under arms (and implying that they were uncontrollable).  This was when John VIII was conquering territory of the Principality of Achaia. Zakythinos quotes Iorga who quotes the Cronica Dolfina to say that John was leading 10,000 horse and 20,000 foot.  Clearly no one has given a moment's thought to the logistics of 10,000 horses and 30,000 men, let alone how this might relate to the Moreote population. I have a certain reliance in numbers in official Venetian documents, especially as these armed Albanians had been giving Methoni and Koroni considerable trouble, and the Venetian administrations needed to know exactly what they were dealing with.

No Moreote army was in evidence when Turahan Bey broke down Manuel's Hexamilion in 1423 -- the defenders ran away when they saw him coming: again, remember the construction -- and raided up to the walls of Mistra and burned Akova, before turning north to Davia.  Theodoros quivered behind Mistra's walls, dithered about becoming a monk, and offered the Morea to Venice.  Venice had just been given Thessaloniki by Andronikos Palaiologos and was having no more Palaiologos hand-me-downs.

No Moreote army, but bands of Albanians made an attempt to stop the Ottoman forces at Davia.  800 of them were killed.  800 is another recurrent number in the 15th century and I have written of 800 here and here. But neither the Despot, nor his brother Despot, nor protostrator, nor megas stratorpedarches, nor any kefali made the slightest recorded gesture of defense.

Around the time of the Conferences of Basel, and Ferrara-Florence, in the late 1430s, Moreote troop numbers were flying around and we get statements of 50,000 and 15,000, but the point was to convince the western powers that there was a substantial number of Greeks, worth western support.

Then in 1443, a letter of John VIII written in Catalan by the Neopolitan consul who was also acting as John's ambassador -- a letter sent to Alfonso V of Naples who was considering offering John an army and twenty-plus galleys, said that the Morea had 40,000 Greek and Albanian horsemen, and 20,000 or more archers. That is a total of 60,000.  Here is 6,000 again, just with an extra 0.


Chalcocondyles caught the 6,000 infection and it appears frequently in his history: 6,000  Venetians troops were defeated by Antonio Acciaiuoli's 300; Beyazid I had 6,000 hounds; the Ottoman sultan was accompanied by 6,000 infantry at all times; Milan captured 6,000 cavalry from the Venetians; 6,000 Turks fell in battle against the Hungarians; Murad brought 6,000 troops to inspect the Isthmus in 1446 (before bringing up the rest of the army to fight the 60,000).

Bessarion described the problem of the Moreote army in a letter to Constantine of early 1444, after Constantine had become Despot and rebuilt the Isthmus wall which had been down for 20 years.
* * * * * *

. . . I know that the present Peloponnesians are, in essence, brave and good-spirited, and strong in body, but in other respects they are naked of arms and untrained, in some part owing to the cruelty of their oppressive leaders and their harsh exactions, and in some part to an overpowering softness and laziness of the generation. These you will take care to train together with immigrants brought, as I have said, either willingly or unwillingly from elsewhere, and you will harden and habituate them to real contests and combat. You will supply them with arms. You will lighten the burdens and unreasonable taxes they suffer under and you will rebuild their downtrodden characters and restore their ancient nobility of soul. Distinguishing between agriculture and military service, and separating the warlike from the peace-loving, you will give to each what is proper, a single craft and a single duty, setting down laws for each of them to carry out.


For manly discipline is in part inherent and in part learned, and no increase in it will come about without learning and study. Whence, both the clever and the dull in character, in every matter in which they wish to become distinguished, must learn and study it.