There is no image for the Marathon stone because photography was forbidden on the occasion when we saw it, and we have not been able to find any photographs. When one becomes available, it will go here. 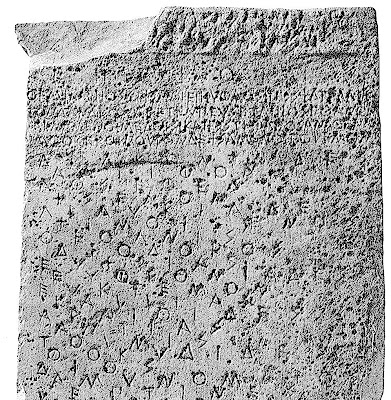 Nearly two years ago, I wrote of a missing Acropolis marble and the Marathon stone. Recently, thanks to the Times Literary Supplement of March 18 (p10) we saw a partial English translation, indicating that the text of the inscription has been published.

This entry continues with Pierre MacKay as author:

The first two lines “Fame, as it reaches the furthest limits of the sunlit earth, / Shall learn the valour of these men: how they died” which turn out to be an immense improvement on the original publication, still involve translation of a line of Greek that could not possibly have been written even in the 7th century AD, let alone the 5th century B.C.

We first saw the stone as members of a small group that was grudgingly permitted to make a hurried dash through a damp, poorly lit basement under the long-closed museum of the town of Astros, near the villa of the Athenian billionaire Herodes Atticus. Even rushed along, as we were, we could recognize from letter-forms, orthography and the rather odd format that this was part of an unpublished casualty list of the Athenians who fell at the battle of Marathon in 490 B.C.

From the research blog for the Center for Hellenic Studies, we have a citation in Supplementum Epigraphicum Graecum, the internationally acknowledged authority for discussions and new discoveries in Greek epigraphy LVI, #430.

The editors of SEG LVI, #430 have recorded, with understandable distaste, the Greek text as it was available to them, remarking that the excavator, G. T. Spyropoulos “has made minimal use of IG, no use of SEG, and his texts contain inaccuracies and faulty accents, which we do not repeat here.” 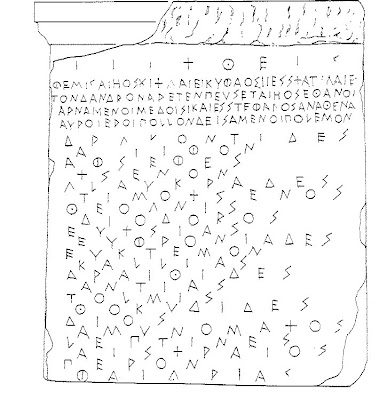 
A blog from Wabash College -- essential parallel reading for this post-- gives a translation:


Good report indeed, as it reaches always the furthest ends of
well-lit earth, will report the aretê of these men, how
they died fighting against Medes and crowned
Athens, a few having awaited the attack of many.

But it seems even better for Fame to learn from this monument, rather than to report it.

The blog by Nikolaos Papazarkadas (writing from the Center for Hellenic Studies) asks how “the alleged crux of L. 2 (first verse of the first hexameter)”:
Φε̃μις ἄρ᾽ | hος κιχ[άν]<ει> αἰεὶ εὐφαõς hέσσχατα γαί[ες]
can be solved. As it is, the line is clumsily restored, (presumably by Spyropoulos) with a quite unnecessary extra syllable <ει> inserted to spoil the meter, and another, the õς of εὐφαõς, lengthened so that it makes the situation even worse.

The Greek alphabet as used by Athenians in 490 B.C. did not contain an ETA or an OMEGA, and did not use accents. (When these Athenians wrote H, they meant the sound we mean by “h”.)

Athenians wrote E for both epsilon and eta, and O for both omicron and omega, and on inscriptions they wrote in all caps. It was up to the reader to know which sound was appropriate in context. Spyropoulos found two instances of O in this line and he got both of them wrong. He seems to have seen ( I do not have access to a photograph):

ΦΕΜΙΣ ΑΡ hΟΣ ΚΙΧ[. .] ΑΙΕΙ ΕΥΦΑΟΣ hΕΣΣΧΑΤΑ ΓΑΙ[. . ]
and to have decided, inexplicably, that the fragment of the verb, κιχ-, should be filled out as a present tense, κιχ[άν]〈ει〉. The generalizing (gnomic) aorist is far more likely in this context, and the line can quite easily be interpreted (I shall use post-403 B.C. Athenian conventions for the vowels, to make it clearer.)
ΦΗΜΙΣ ΑΡ hΩΣ ΚΙΧ[EN] ΑΙΕΙ ΕΥΦΑΟΣ hΕΣΣΧΑΤΑ ΓΑΙ[ΗΣ]
This produces a slightly different translation from the ones given above, in that it is Fame that is brilliant, rather than the ends of the earth.

Fame, ever brilliant as she seeks out the ends of the earth,
Shall learn the valour of these men: how they died
Fighting the Medes, and and placed a crown on Athens
A few, accepting battle against many.

εὔφαος, incidentally, is not found in the Thesaurus Linguae Graecae database, but it is a perfectly reasonable formation, and would agree with the feminine noun Φῆμις.

Of at least as much interest as these epigraphical quibbles, however, is the fact that the first general access to this extraordinary inscription is in translation, in a review in the Times Literary Supplement. It seems to have been around for several years. The editors of SEG speak well of an article, G. Steinhauer. Horos 17-21 (2004—09) 679-92, but I could not expect to see a copy of this in fewer than three weeks, so I cannot evaluate the reasons which may have led Steinhauer to stick with Spyropoulos’s present tense here, where the unaugmented gnomic aorist would seem very much preferable on all counts.

If we ask how the inscription got to the villa in the Peloponnesos, the answer is likely to be that it was taken there by a self-indulgent plutocrat whose wishes could not well be ignored. Until now, I had regarded the quaintly archaic accusation of “Aiming at Tyranny” that was more than once directed against Herodes Atticus as a sort of petty vendetta, but this fragment, effectively looted from Attica has led me to reconsider the charge. Herodes may have forced or bribed a subservient Athenian administration to permit the looting, but it was still looting, rather like Lord Elgin’s arrangement with the Ottoman authorities to take away marbles surrounding the Parthenon which were otherwise destined for the lime-kiln, or the repairs to the lower courses of the Acropolis wall.

There is some irony in the preservation of this fragment and the Elgin marbles because they were looted, but there is the difference that the Elgin marbles have been on public exhibit for more than a century, and there is no indication that this Marathon fragment, or its fellow artefacts, have been set free from their damp tomb. The Horos article cited above informs us that G. Spyropoulos uncovered this stone between 1980 and 2001.  We might recall, that when the German Archaeological Society discovered the glorious inscribed bronze Persian helmet from Marathon (ΑΘΕΝΑΙΟΙ ΜΕΔΟΝ ΛΑΒΟΝΤΕΣ) in the excavations at Olympia, they exhibited photographs of it in the very same year.
Posted by Nauplion at 5:51 PM