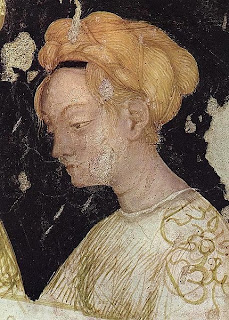 This image will represent Cleofe Malatesta.  It is painted on the wall of the throne room in her sister, Paola's palace in Mantua, and its features strongly resemble features in the portraits of her brother, Carlo, and Paola, below.   Compare the nose, chin, supraorbital arch. It is true that I once used another image of the same woman for Maria of Trebizond, but that was because I accepted the pronouncement of an Important Art Historian. We were wrong. 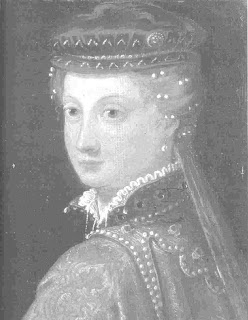 I have written here on Sophia of Montferrat and how men talked about her face.  This entry is on how men talked about Cleofe's clothes.  Cleofe was an Italian woman of the early Renaissance, and brought with her to Greece manners and dress quite different from what was assumed appropriate for Greek women.  Certainly, her dress made more of her visible than Greek dress would have.  This is the sort of thing Cleofe may have worn on a formal occasion: 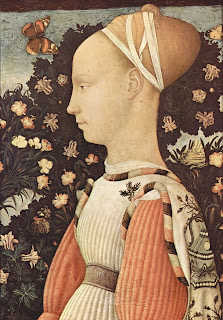 While this is what a woman of her class would have been expected to wear at Mistra, except for full-press court occasions.  You can see that the difference would have been noticed: 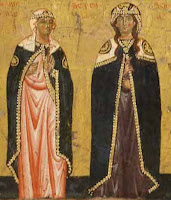 A year and a half before Cleofe arrived in Greece, Theodoros wrote the pope that she would be able to keep her Italian customs, and her religion.  She arrived in the fall of 1420 and the wedding was 19 January 1421.  Then she disappears from written records for six years, except for the information in Paola's account books that she was sending Cleofe an annual gift of Mantuan cheese.

Six years later, in February 1427, Battista, their sister-in-law, wrote Paola that Cleofe was dressing as a nun.  This was a great shame. A fabric specialist  who worked on fabrics found in a Mistra grave wrote: "Most Byzantine fabrics are dense and relatively thick; it seems that the criteria of lightness and suppleness were not prevalent in Byzantium." 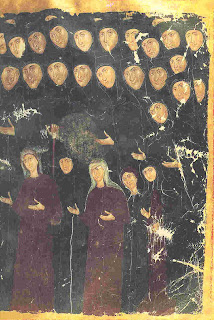 A mutual friend who had visited Cleofe reported that she said, "I have not become a nun because I was anointed with a little oil."  Far from it.  She had now achieved the status she should have had six years earlier, but only now did she tell her family that at the time of the marriage, Theodoros had announced that he would live with her for six years, only, without sex.

At the end of the six years, before they knew this, there were worried letters from the family to the Pope fearing Theodoros would abandon her.  Then the next month there was the letter about dressing like a nun.  It does look as if, for his own complex reasons which he probably did not understand, Theodoros offered her a real, sexual marriage, in exchange for conversion to Orthodoxy and a change of dress.  A year later, in early 1428, there was a baby girl, and in April 1433 she died in giving birth to a son. 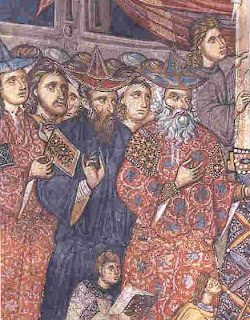 That would be it, except that at the memorial service, the Mistra men talked about her clothes.  Plethon, who was for inexplicable reasons considered to be a great philosopher, spoke first.  He assured Theodoros that he could believe in the immortality of the soul because horses do not commit suicide. Then he complimented Cleofe's "sober prudence in putting off her leisurely ways and taking up the decorous restraint of our women."  He also commended her fasting. It is difficult for a modern, Western women not to think that he was pleased to think of the erasure of her body.

The next speaker was her doctor, Demetrios Pepagomenos.   He responded to Plethon, speaking obliquely, but disagreeing at length about clothes, and lamented

her youth, in which she had such grace, [and] the beauty, which has not been concealed, as might have been proper, but in a cruel way. . . . The wearing of clothes outside our habits of dress, beyond our temperament and sense of what, so to speak, is naturally required, was a matter of her unmaterial and spiritual nature. [Look at the untidy hair and imperfect posture in the top picture.] . . .  Not that there might ever be perfection more perfect than perfection, or that clothing will change character, but nonetheless, there was some length of time before the end, when, unless she was constrained by official ceremonies, she wore the fashion of those who live monastically (μονάζουσι) so that what was earlier unappreciated by outsiders, was now obvious to all.

In 1955,  a few fragments of the body of a young woman were found in a grave in the palace chapel of Mistra.  Among them were bits of fabrics from two gowns, with enough stitching in place to make the style of dress clear.  The outer gown was of a silk Italian brocade with a top styled like this: 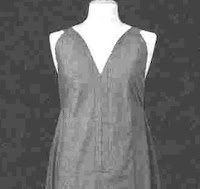 This V-necked gown was worn over a sheer silk gown very like the gown the Cleofe-stand-in  is wearing here.  The fabric expert noted how very soft and light these tomb fabrics were.

The speaker after Pepagomenos was Nikeforas Cheilas.  He blasted Plethon's ego and then accused Pepagomenos of killing his patient.  He went on to describe Cleofe's death as being like "like the falling and shattering of a precious crystal." Going beyond clothing, he said:


Gone is the shrine of all virtues and graces, the most holy queen, the rainbow shining brilliantly in the beauty of her body, flashing out more intensely than any statue or image . . . [she] enjoyed a sort of splendor and radiance . . .