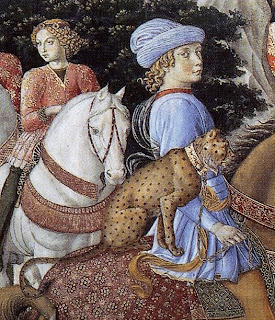 XII: Concerning the imperial bride:
One should know that at the arrival of the imperial bride (δεσποίνης νύμφης), whether by land or by water, when the day when she is to be be brought safely into port at The City is known, the emperor, her husband-to-be (ἀνὴρ αὐτῆς ὁ νεόνυμφος) goes to meet her with his father, if he is living; if not, he goes alone. If she comes by land, it is the custom that she alight in the neighborhood of Pēgē; if she comes by ship, near the church of the Blachernes outside the city, where it happens to be suitable. When she arrives at one place or another, the wives of the dignitaries, senators, and the other highest and most well-born archons, welcome the lady and bride-to-be warmly and attend her as an empress. Both the emperors come to meet her, if the bridegroom has no father, he does as has been said. If then she comes by ship, he meets her at the acropolis at the Evgenikos Gate, and if by land, outside the city as has been said. After that, the emperors, or the emperor, leave her there; the wives of the archons mentioned, whether the wives of the despots, or the wives of the sebastokrators, or of the caesars, or of the other well-born, put the red shoes on her. Dressed in the imperial robes prepared in advance, and escorted as an empress, she comes up to the palace on horseback; after that the marriage ceremony is held on the selected day.
Equally, one should know this: when the leopard-wranglers (παρδοβάγιλοι) bring in their leopards, they enter the palace on horse, and similarly leave on horse. Also, those bearing the cold drinks enter the palace on horse.
* * * *
This is my translation of the chapter on imperial brides from Pseudo-Kodinos, a book compiled about 1360 with later additions about protocol at the Palaiologan court in Constantinople, and it got me to thinking about Sophia of Montferrat who was so scalded by her marriage to John VIII.  He rejected her immediately after the wedding, apparently because he did not like her appearance.
But look at the sequence of events in the light of this protocol.  Sophia arrived in Constantinople on a Venetian galley in November of 1420.  It docked on the Golden Horn, under the Blachernae, probably about where the pretty little mosque is now.  She was welcomed by the court ladies as if she were an empress.  She was John's third cousin, her family used Greek names, and she had probably already learned to speak a little Greek.
Then John and Manuel arrived.  These two slight imperial males dressed as stiffly as icons, and behaving almost as stiffly, greeted her.  Then they left and the court ladies put the imperial scarlet shoes on her feet, and dressed her in robes something like her mother-in-law Helena is wearing here. Then they processed along those narrow twisting streets up the steep hill to the Blachernae  on horseback, and we know nothing about how Byzantine women sat a horse.  If they rode astride like Maria of Trebizond, no one has left any information.

The procession was led by the leopard wranglers, and the picture above, identified as young Giuliani de Medici in the Gozzoli fresco below, leads off the processions of the Magi as one of them.

The boy was about seven years old when the fresco was painted in 1460, anjd the procession of the Byzantines and John VIII into Florence had happened fourteen years before he was born.  He was murdered in the Duomo in 1478 in the Pazzi Conspiracy.  That is a shame, but it has nothing to do with us here.

The wedding was on 19 January 1421.  John was crowned that day -- Pseudo-Kodinos gives meticulous directions for the ceremony, and then, apparently on the next day, John crowned Sophia.  Byzantine emperors crowned their wives.  He never spoke to her again.

Why was there a wedding at all?  John had two months between meeting her at the boat, and the ceremonies in Agia Sophia and he must have judged this big blond woman instantly.  Would it have been possible for him to have rejected the bride who had been delivered to him (with a great deal in the way of jewels, gold, and financing)?  Does "incompatibility" make a non-marriage easier to accomplish? Did anyone tell her what was going on before it happened?

When she left, it was on a Majorcan ship chartered at such short notice that it had to leave the Genoese imports it had been charted for on the wharf.  The ship brought Sophia and small group of courtiers across the Golden Horn to Galata, where the Genoese all came down to the waterfront and paid homage to her as their Empress.  The Majorcan ship took her to Chios, where she was provided a Genoese galley back to Genoa.  When she arrived home in Montferrat, she was welcomed as Empress.  All the way along, everyone, with the exception of John, was very kind to her.

She took her crown when she left.  I had thought it might be her wedding crown -- Greek rite weddings crown the bride and bridegroom, and exchange their crowns -- but Pseudo-Kodinos says nothing about that.  John was crowned at the wedding, as Emperor, and the imperial crown can be exchanged for nothing else.  Sophia was crowned Empress of the Eastern Empire and all she had to show for it was the crown John had put on her head


* * * * * *
I am giving a paper this weekend at the meeting of the Australian Association for Byzantine Studies at the University of New South Wales in Armindale entitled "The Brides of 1420," in which I will be discussing Sophia's face, and Cleofe's clothes.

The animal in the picture above is actually a cheetah (on the ground below it is a leopard), but "cheetah-wrangler" doesn't work in English nearly as well as "leopard-wrangler." Besides, cheetahs were also called "hunting leopards." Nick Nicholas wrote a paper a few years back -- "A Conundrum of Cats: Pards and their relatives in Byzantium," in which he analyzed all the Byzantine terms for members of the cat family, and then tried to identify each one. Byzantines called a cheetah a pardos.  Gozzoli got it right.  That is, by the way, Benozzo Gozzoli's self-portrait -- the man with the blue and white hat in front of the horse, below. 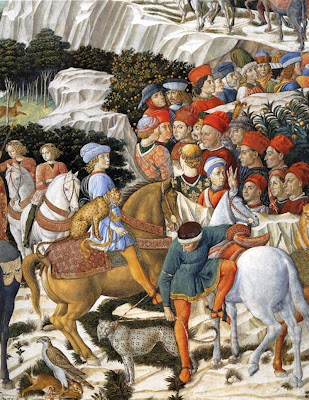