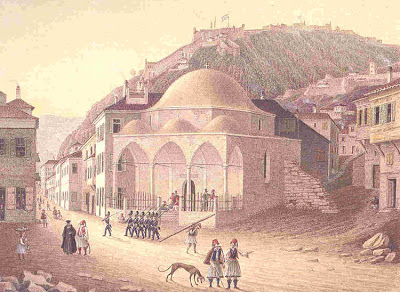 Picking up on both of the two details in Nauplion: Two Details.

Going back again to the 16th century map detail of the inverted Y at the plateia of Ag. Spyridon, I said that I had found at that plateia strong support for the reliability of that drawn Y.  I have now found a picture of the end of the right-hand fork where it comes into old Nauplion's main plateia at the southwest corner.

You will recognize the pretty little mosque used for the Trianon cinema --  porch domes and columns now removed, and the building across the street to the left that has been a restaurant for three generations.  To the right of the mosque, where the yellow Acropolis hotel now stands you can see an open space going up the hill.  The top of the space, in a larger version of the picture, shows clearly a ribbon of steps.  So the mosque was built beside the road coming down from the Y.  In the 15th and 16th centuries, before the mosque was built, a church stood where the picture shows houses, just about where Dmitri Kountalis' shop and the bank are now.
* * * * * * * * * * 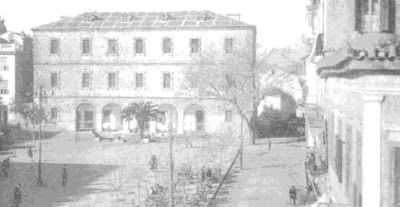 I wrote that the platan tree at the plateia -- diagonally across the plateia from the end of the street shown above -- was old enough to remember the Turks.  So I have been told many times.  But I found this undated photo on Facebook, and that platan tree looks to me extremely unlikely to have ever seen any Turks at all.  I cannot get the photo clear enough, large enough, to guess at the date from the clothes the people are wearing, so for now, this platan is one more fiction that needs to be allowed to rest quietly although it is a lovely tree, and fine for spending hours under. This means that the wanton slaughter of the great trees by the owners of two restaurants destroyed the two great trees remaining from the 17th century. 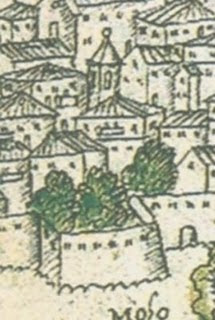 The best Nauplion can do now is point out a palm tree or two, supposedly planted by Kapodistrias at independence. The palm in Greek is phoinix, and the first symbol of free Greece was the phoenix, the bird-lion that is reborn out of the flames that consume it.  This one being decorated for Christmas does not, I think, quite convey the power of that symbol. 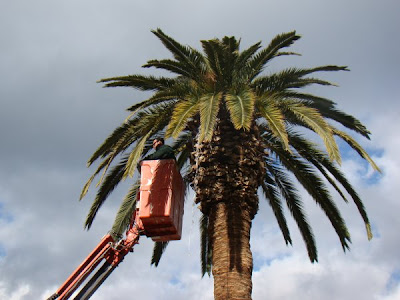 You can find a couple of phoenixes left on buildings of the period, and one was used on the first coinage of the country. But a tall skinny palm with its little whoosh of feathers at the top cannot compare with those broad-spreading massive-trunked trees I remember.  Despite all one hears about "preserving our heritage," such preservation is extremely partial and easily influenced by profit.