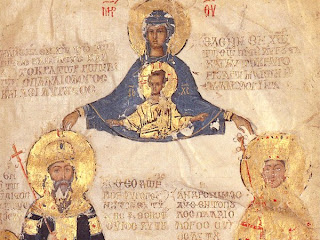 In September or October of 1429, Despot Theodoros II wrote a poem to his parents, who are shown here in a manuscript portrait from about 1403. This is the earliest of three poems by Theodoros in the handwriting of Cardinal Bessarion and attributed to him, but the author was Theodoros. The third of these poems was discussed here.
This autumn poem of Theodoros was to accompany an elaborately-embroidered panel with two double portraits of his parents, to cover their tomb, something like the Mistra fresco of his uncle Theodore.. His father, Manuel II, had died four years before and was buried in the Church of the Pantokrator in Constantinople (now Zeyrek Djami)..; his mother, Helena, had retired to a convent, which was almost like being dead except for the times she acted as regent

The panel was splendidly worked in gold -- Theodoros wrote, "I describe here in gold as being golden . . . with this torchlight" -- and very probably with pearls and other gems, something like this small portrait of his brother John and his bride, but larger, perhaps like this covering for an altar door. Six years later, a chronicle recorded that it had been sent to Constantinople, but whether Mistra was very short of workers with the needed skills, we cannot know. It might have taken a while to make the necessary gold thread -- Theodoros refers to the "gold hammerings showing what is within."

It is obvious from the poem that these were the glory days of the Despotate of Mistra. The brothers Palaiologos -- John, Theodoros, Constantine, and Thomas -- were at the top of their game, all accomplished without their father.

Theodoros' mood had reversed itself recovered from his own panic of the previous year about becoming a father, a panic that had made him desperately want to retreat to a monastery and left his wife and brothers at loose ends. Here he writes with pride of himself as "purple-born from admired stock" -- an awkward phrase, and continues:

Therefore you selected us, the children of your loins,
to rule the cleruchies of the Ausonians.

Theodoros is showing off his education here, but he had had a great deal of it: Ausonians was a literary way to refer to Italians, but cleruchies is more to the point, because it refers to lands held in another country. The brothers had, as of September 1429, acquired the Italian cleruchies in the Morea (except for a negligible amount of territory held by Venice), doubling both the territory and the income of the Despotate:

So there was a great deal in the way of cleruchies for the brothers to celebrate and money to pay for gold and pearls and skilled embroiderers. Gold runs through the poem to describe the moral qualities of Manuel and Helena:

Each of us in different ways, and I joyfully
honoring you with these fine-worked fabrics,
so may you extending your hands from above
through many days guarding the strengths of empire,
appear as defender, foundation, and power.