Along with the Bishop and Huntsmen . . . 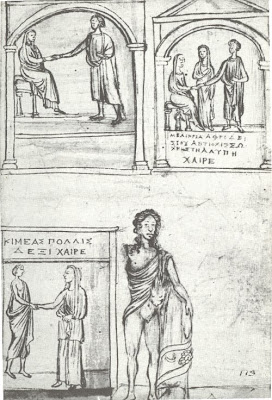 A recent blog mentions a book by diplomat and bibliophile Ioannis Gennadios on the looting of Greek antiquities, which he apparently identified as starting with Cyriaco of Ancona in 1440. (How did he ever miss the Romans?)

Now I sit in Gennadios' library and it is a pleasing place, but Gennadios is unjust, and to use a word like 'looting' surely indicates nationalist assumptions rather than information about what Cyriaco himself recorded. Earlier notes here tried to indicate the richness of Cyriaco's personality.

This is what Cyriaco felt about taking things, recounting a visit to Cyzicus:

But alas! How unsightly a structure we returned to, compared to the one we inspected fourteen years ago! For then we saw thirty- one surviving columns standing erect, whereas now I find that [only] twenty-nine columns remain, some shorn of their architraves. . . . ruined and dashed to the ground, evidently by the barbarians.

He did something about it: he visited the Ottoman governor of the area, who was a Greek, and talked with him about the need to preserve such treasures. The governor promised to help.

Cyriaco loved antiquities, and everywhere he went, he copied inscriptions -- it is only because of him that we have information about hundreds of Greek inscriptions now missing, drew carvings and buildings -- the drawings here are of three grave markers and a statue of Dionysios he saw in Nauplion, now missing. His drawings of antiquities at Merbaka allow us to compare what he saw with what survives, though the large panel is missing -- might a cleric, or a Turk, have thought a carving of an undressed couple on a bed unsuitable for public viewing, even if they were accompanied by the family, the horse, and the snake?

I cannot find, rereading what survives of Cyriaco's diaries and letters, anything that might be considered looting, although he did buy a secular manuscript on Mount Athos. This is what he did in the libraries on Athos:

That is the way he travelled, always finding local Greeks and resident Italians who cared about antiquities, and making notes:

Travelling in Imbros with the historian-to-be Michael Kritoboulos, the two of them composed an inscription and had it carved in Attic letters and set at the main gate of the new citadel that the governor had constructed out of older stones.

He made his notes and explored with joy. Read, finally, this description of his searches on Crete:

13 July 1445. . . . we settled down in the bishop's country house near Miscea, at the foot of White Mountain . . . we saw on the banks and reverenced another small, old church of the Blessed Virgin enclosed by trees laden with fruit. But, to see what we came to see . . . those famous mountain-cypress trees -- and to inspect certain antique remnants of towns that I had heard still exist . . . on the next day, Jove's lucky day, along with his excellency the bishop and accompanied by a number of rustics and huntsmen from the neighborhood, we climbed through rocky, steep hills to the White Mountains themselves. There we first inspected the towered, scattered walls of a certain very old town . . . There the bishop chose to linger, to study the walls, which were composed of huge stones, and to render to God due glory; whereas I, accompanied by a local, Basil, climbed to higher, wooded summits of the mountains, steep, unfamiliar trail, my feet clad in sandals of Hyrcanian hide; and, under the personal guidance of our wing-footed Mercury, we saw at last the object of our quest, numerous cypresses, tall, fragrant conifers menacing the sky with their foliage, ever green, the distinguished glory of the forests . . . But first I made sure to record here a fine, intact marble statue base that I found in a garden near the sea.

Review of the best Cyriaco book yet, by E. Bodnar, S.J.