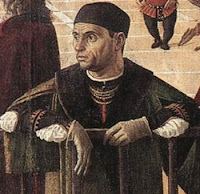 This is not Bartolomeo Minio. Minio would never have given his attention to dressing this well, and he couldn't have afforded to. But he has Minio's resolution, isolation, and the deep marks of experience: he was Minio's contemporary, and represents him here.

There is a myth of Venice, often disparaged, and it has been fashionable in the last 20 years for historians to deconstruct one part or another of the myth. But Minio was the man the myth describes and he deserves honor. He is knowable, in the way that few men from 500+ years ago are knowable, because there survive 150 letters that he wrote,* in addition to many small references to him in Venetian government documents, comments in the Sanudo Diaries, and bits that can be inferred from other records..

Minio was born about 1428 and died in the summer of 1515. He should have died a number of other times for which records survive -- of malaria in Nauplion in August 1480, of dysentery in the Ferrara war in 1484, in a night battle at sea with pirates in June 1485, of pneumonia in Crete in 1501. He was a lonely man, tense, with neck cramps and migraines. He thought he followed a strict construction of his intructions, but you can watch him developing friendships and making decisions more out of concern for actual people.

The variety of his professional life reflects the expectations Venice had of its representatives in the stato da mar. He built the sea walls of Nauplion and the great tower of Famagusta. He developed warm relationships with a series of Ottoman governors and officials in the Morea, and after a stratioti revolt was able to commit Venice to an exceptional grant of amnesty that prevented an all-out revolt across the country. He kept having to deal with starvation -- in Nauplion, of the chronically unpaid soldiers stationed there, and of the city after a crop failure; in Crete he received the refugees from the capture of Methoni and Koroni by the Turks, and reported that there was no place for them but the streets, and no way of providing food. He had orders to obtain 40 falcons for the French fleet in the dead of winter, and to bury the headless body of an acquaintance executed for treason.

His first post immediately after his return from Nauplion in 1483 was provveditor over the stratioti taken from Greece for the Ferrara war. The stratioti had been so shocked at the violence and slaughter in their first Italian encounter (which was with Federigo, Montefeltro, Duke of Urbino) -- guerilla fighters had been sent in opposite a mounted charge in full armor -- that they refused to fight without a commander who knew what he was doing, "not one of those Italians." Minio was selected because he had dealt with the same men for nearly four years, and he was complimented for his success in managing them and for winning battles in the field.

The next year, 1484, he was elected captain to defend the galley convoy, muda, to Flanders and England, and this is a story worth following. On 3 August, the four galleys reached the Atlantic. They were attacked off Cape Vincent in the Bay of Biscay by seven armed ships flying the flag of Charles VIII of France, commanded by the corsair Nicolò Griego ("Nick the Greek"). In the ensuing battle which lasted from the first hour of the day to the twentieth, 300 galioti – oarsmen who were armed and expected to fight – were killed, as were most of the crossbowmen, and two of the patroni. Christopher Columbus was one of the pirates and a sensational description survives in a biography written by his son. Most of the galioti were killed. Minio and two of the investors were set on the coast of Portugal to make their way home. The pirates went away with the galleys and at least 200,000 ducats worth of goods for sale, and the potential of bankrupting half the merchants in Venice.**

He is the only one of some 500 Venetian governors in Greek territories before 1540 who was remembered by the Greeks. He wrote once, in extreme unhappiness, about having to use forced labor at Nauplion working on the walls -- it was a hardship for "these poor people," but, he said, he worked with them in person. The Greeks remembered that, and a chronicle records:

Bartolomeo Minio is one of those people of whom Cavafy wrote:


Honor to those who in their lives
are committed and guard their Thermopylae.

Never stirring from duty;
just and upright in all their deeds,
but with pity and compassion too;
generous whenever they are rich, and when
they are poor, again a little generous,
again helping as much as they are able;
always speaking the truth,
but without rancor for those who lie.