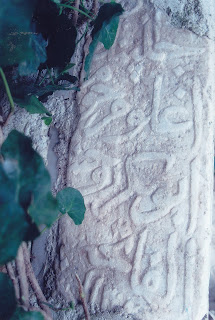 A reader from Nauplion recently responded to my request for more spolia several months ago and sent me six "new" finds. This first is a late Ottoman inscription spotted in a private yard, now turned on its side but originally a tombstone.  It reads:

(See reader's correction in Comments.)
The next is a second is a used and reused classical doorstep rotated 90 degrees for use as a doorstep on the south side of Panagia. 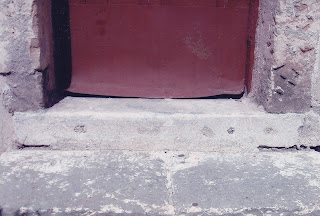 My correspondent found several spolia in the walls around the Pentadelphia bastion and the walk beside the swimming area where -- unaccountably -- I never managed to walk during my 10 visits to Nauplion in 10 months.  This next  is particularly interesting.  Possibly it is related to the two faces on the front of the Arsenale at the platea. I would love to learn more about it. 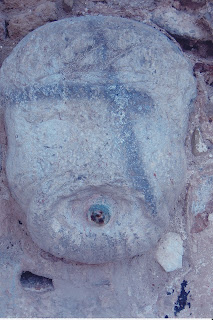 This fragile Ionic fragment is to the right of the Sea Gate. 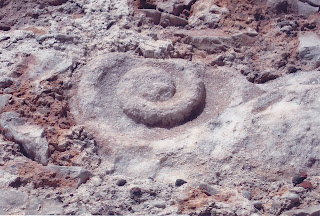 And this piece, that looks to me like a cannon butt, is to the left of the Sea Gate: 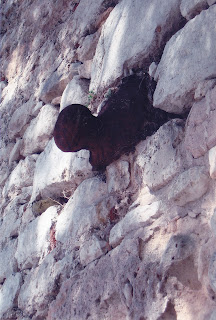 Finally, a pretty piece from the side of the 1830s building that was once the Ministry of the Armed Forces, on Papanikolao St., near Ag. Spyridon.  It is a shame that the owners of the building have not shown it more respect. 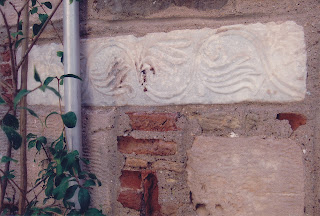 There are 6 pieces of spolia in this entry and 12 in the first.  Considering the length of time Nauplion has been inhabited, there should be more.  I suspect that private gardens shelter quite a few not easily photographed by the passer-by.  If anyone has found and photographed spolia in Argos, I would be delighted to include them here, too.  Or, for that matter, spolia anywhere between Kiveri-Argos-Nauplion-Tolo.
My great appreciation to Prof. Keith Sturgess of Nauplion for making the time to take these photographs for me.

Pierre A. MacKay read the Ottoman inscription.
Posted by Nauplion at 4:17 PM