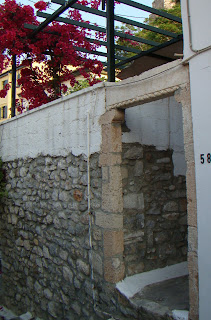 Spolia mean "carvings from previous periods patched into later buildings," and you would think that there would be a lot to find in Nauplion -- it has been inhabited since Palaeolithic times. I have spent a lot of time looking for spolia in Nauplion and I think I have located very nearly everything in the old city that can be seen by the normal visitor, though I suspect there may be a few pieces embedded in private residences.  (Note: I didn't find them all.  Here are more.)

This is a catalog of my twelve public finds, not counting one whose photograph has gone missing. The first, and best, is the Byzantine lintel of the garden entrance you see above, at the right of the top of the stairs to Akro-Nauplion.

You can see a similar usage of two pieces, one classical and one Turkish, over the door of the house under the platan tree on the plateia.  The initials of the builder of the house, and the date, 1878, have been added to the Turkish slab.

At the other end of the plateia are the four late-antique capitals of the columns of the little mosque built soon after the Turks acquired Nauplion in 1540. 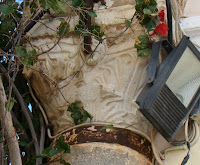 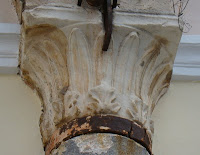 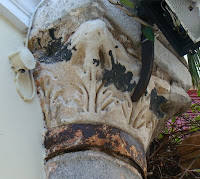 A few doors down the main street from the mosque, you will find this small Turkish piece on the right: 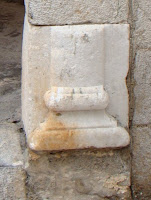 One I particularly like -- this is the picture I don't have -- is a house on the main cross-street where a Turkish block with carved rosettes has been sawn in half length-wise and the halves used to support windows.  The halving was not done at perfect right angles and the slight slant to each piece is beguiling. At the top of the the stairs on the hillside in the little neighborhood above the bus station is this classical lintel. It does not quite cover the whole space that it should, but the piece was more important than correct construction. The capitals are confusing.

On the north side of the Panagia church, beside the red cafe, a classical door step has been used for the lintel of a window, unattractive but significant -- significant building elements have been left uncovered all over the outside of Panagia.  You can see in this lintel the holes for the pivots of the doors. 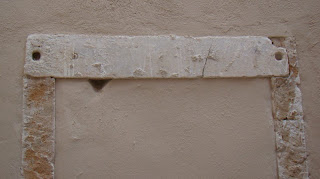 Behind Panagia, among the graves, is a stone I am unsure about, but it seems to be a Venetian shield to which Turkish cypress trees have been added. 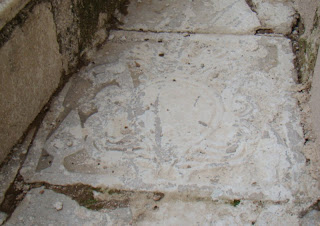 Finally, two shields once used for fountains, one Turkish, one Venetian. The Turkish one has a little turban, and what appears to be a most remarkable smiling sun rising over clouds or rocks.  The Venetian dates from around 1700 and the surface has been uniformly chipped to remove any images.  I think the blue works well.

Should you find other spolia, please let me know.  A reader has sent his spolia collection and you can see them here.
Posted by Nauplion at 10:38 AM